You might recall that a couple of months back I decided it was time to try and whittle down the embarrassingly large pile of food magazines I have lying around the place.  In order to do that I set myself the challenge of cooking something out of the magazine pile at least once a week.  Well I'm pleased to say that I've been doing just that, even though I haven't always been able to post the outcomes.  I also can't really say that I've made much of a dent in the pile, as some of these magazines are so good that I've been stuck in the same one for a month!  But, never mind, at least I'm using them, and I've even finally managed to discard one or two.


As you may have noticed, when I have managed to actually get one of these magazine gems posted, I've joined in with the Magazine Mondays group which is usually hosted by the lovely Ivonne at Cream Puffs in Venice.  Since, Ivonne is a little busy this week I'm honoured to be hosting on her behalf this week.


My contribution this week is a Shrimp & Curried Coconut Risotto, which I adapted from a recipe for Crab & Coconut Risotto which appeared in the December/January 2004-2005 issue of Delicious magazine

.  I made a few minor changes to the recipe, firstly using shrimp instead of crabmeat (which is not readily available here), secondly replacing lemongrass with freshly grated lemon zest, and lastly adjusting quantities because I didn't have four people to feed.  You can see the original version of the recipe by following the link above, or my adaptation at the end of this post.


Other contributions to Magazine Mondays this week came from:


Kimberly of Couple in the Kitchen who made Cranberry Swirl Cheesecake with Raspberry-Cranberry Compote from the December 1998 issue of Bon Appetit Magazine;


Mary of Caramels, Bonbons et Chocolats who made Crisp Maple Shortbread Cookies from the current issue of Chatelaine;


Chaya of Chaya's Comfy Cook Blog who made Cornmeal Dumplings for Chicken Soup from the current issue of Bon Appetit Magazine;


Tina Marie of Life in the Slow Lane at Squirrel Head Manor who made Julie's Noodle Casserole from Family Circle Magazine;


Grace at La Mia Vita Dolce (My Sweet Life) who made Chocolate Whoopie Pies with Vanilla Swiss Meringue Buttercream from the November issue of Food and Travel;


Allyson of ReTorte who made Bobby Flay's Toasted Coconut Cake from the holiday issue of Food Network Magazine; and


Jamie of Life's a Feast who made Portugese Cream Tartlets from the December 2010 issue of Delicious Magazine (UK).


Heat the oil and half the butter in a large frying pan, set over medium heat.  Add the shallot and cook until softened, approximately 2-3 minutes.  Add the garlic and grated lemon zest, cook for another minute, then add the curry powder and rice.


Stir until the rice is well coated with everything, then add a ladleful of stock and continue stirring until all the liquid is absorbed.  Then continue in the same way, adding the stock one ladleful at a time, and each time stirring until the liquid is absorbed before adding the next spoonful.  You want to continue doing this until the rice has begun to release its starches and becomes "creamy", but still has a little bite left to it.  When you feel as though the rice is almost done, and you feel as though you are probably only going to add one more ladleful of stock add the shrimp to the rice at the same time.  By the time the rice has absorbed that last batch of stock the shrimp will be almost cooked and will finish off cooking in the final resting time.


Now remove the pan from the heat, stir in the rest of the butter and the coconut cream, cover and allow to rest for 5 minutes.


Stir the coriander into the risotto and serve.  Garnish with a little extra coriander and the toasted coconut shavings if using.  (Note I used toasted shredded coconut, and I have to say that even though I love toasted coconut, I didn't like the texture of the "crispy" coconut with the soft, unctuousness of the rice - it just seemed to be too much of a contrast, rather like coming across toenail clippings in your dinner!  Maybe if I had fresh coconut which I was able to shave and then toast it might have been better.  Either way - you choose)


One more ingredient that would really finish this dish off nicely - a tropical island paradise in which to eat it!

While you're here, check out my new event "Make it with ..... Mondays" - this week we're cooking with saffron and I'd love you to join in. 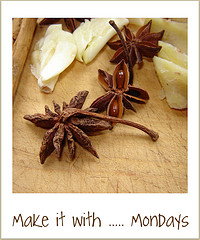 I'm also giving away a free copy of Mark Bittman's How to Cook Everything iPhone application (also works on iPod Touch and iPad) - full details here.  There are lots of opportunities to win, and this application really is brilliant, so do go and check it out.  All comments left on this post automatically get an entry to win.

Posted by Couscous & Consciousness at 1:14 PM