Saffron & Blueberry Champagne Jelly & a "Making it with ..... Mondays" Update 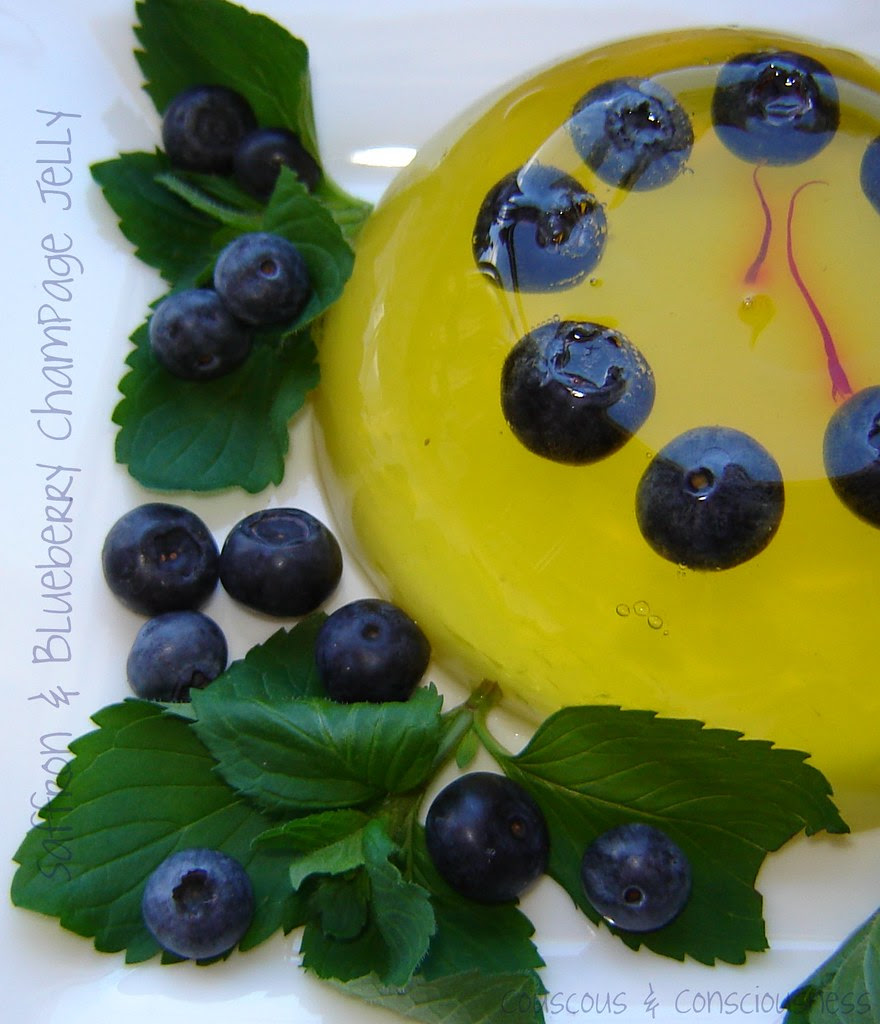 I want to begin this post by thanking so many of you for your encouragement and enthusiasm for my new blog event "Making it with ..... Mondays", which kicked off this week with challenge saffron.  As I mentioned on Monday when I announced this event, I want this to be about expanding my own culinary knowledge, skills and experience, and I want to encourage you to do the same.  I want you to really explore each week's ingredient;  challenging yourself to use or try an ingredient you don't use very often;  maybe seeking out suitable alternatives, and discussing them in your post, if it's an ingredient that is not readily available to you;  or, maybe trying to come up with more unusual ways to use the ingredient if it's something you use regularly.
So, in order to really help you get the most out of this event and really participate in it fully, I have decided first of all to extend the length of time for which each "linky" will be open from one week to two weeks - so, just to be perfectly clear, there will be a new ingredient challenge announced each week and the linky for that ingredient will be open for two weeks.  I will also add the linky to any further relevant posts I put up during that time, so you don't necessarily have to try and find your way back through two weeks worth of posts to find the right linky.   I thought you might also find it useful to know what's coming up, so that you can really think ahead and maybe work these ingredients into posts you might be preparing for other events - we are all busy people and there is nothing wrong with a post that does double duty.
So, here we go, just to tantalise your tastebuds and stimulate your imaginations, this is the "Make it with ..... Mondays" schedule for the next four weeks:
Week commencing Monday 10 January - we're making it with vanilla
Week commencing Monday 17 January - we're making it with quinoa
Week commencing Monday 24 January - we're making it with paprika

Week commencing Monday 7 February - we're making it with Nutella
Thanks so much to those of you who have already posted up a link for challenge saffron - the link for this will now be open until midday Monday 17 January, and remember that you may link as many posts as you like as long as they include the special ingredient;  the link for challenge vanilla will be open 2.00pm Monday 10 January.
Now, back to challenge saffron.  As I mentioned the other day, I'm no stranger to saffron - I always have it in my pantry - but I have always used it in savoury dishes, such as risottos and pasta dishes.  So this week I've been enjoying exploring the use of this wonderful ingredient in less predictable ways.  Earlier in the week, I made this Saffron Fruit-and-Nut Bread which was a great success - the earthy saffron flavour, combined with the rich, buttery, fruity bread was intriguing and it was great to enjoy saffron in a slightly sweeter incarnation, which got me wanting to explore that a little more.  At the same time I had been playing around with some leftover Prosecco after New Year's Eve and turning it into jelly - which really got me thinking that a saffron jelly might be pretty interesting.  This is what I came up with.
Saffron & Blueberry Champagne Jelly Recipe
Serves 4 - 6
8 sheets of leaf gelatine
bowl of cold water
750ml bottle of Prosecco (or other sparkling wine or champagne)
100g caster sugar
scant pinch of saffron threads (about 10-12 threads)
juice of 1 lemon
fresh blueberries
Put about 125ml of the Prosecco into a small pot, along with the sugar, saffron threads and lemon juice, set over low-medium heat, and stir constantly until the sugar is dissolved and the liquid is hot.  Set aside for about 15 minutes to allow the saffron to infuse - the liquid will turn a deepish golden colour.
Meanwhile put the gelatine sheets into the bowl of cold water - a wide, shallow bowl is best and the quantity of water doesn't matter.  The water won't be going into the jelly, it is purely for soaking the gelatine. 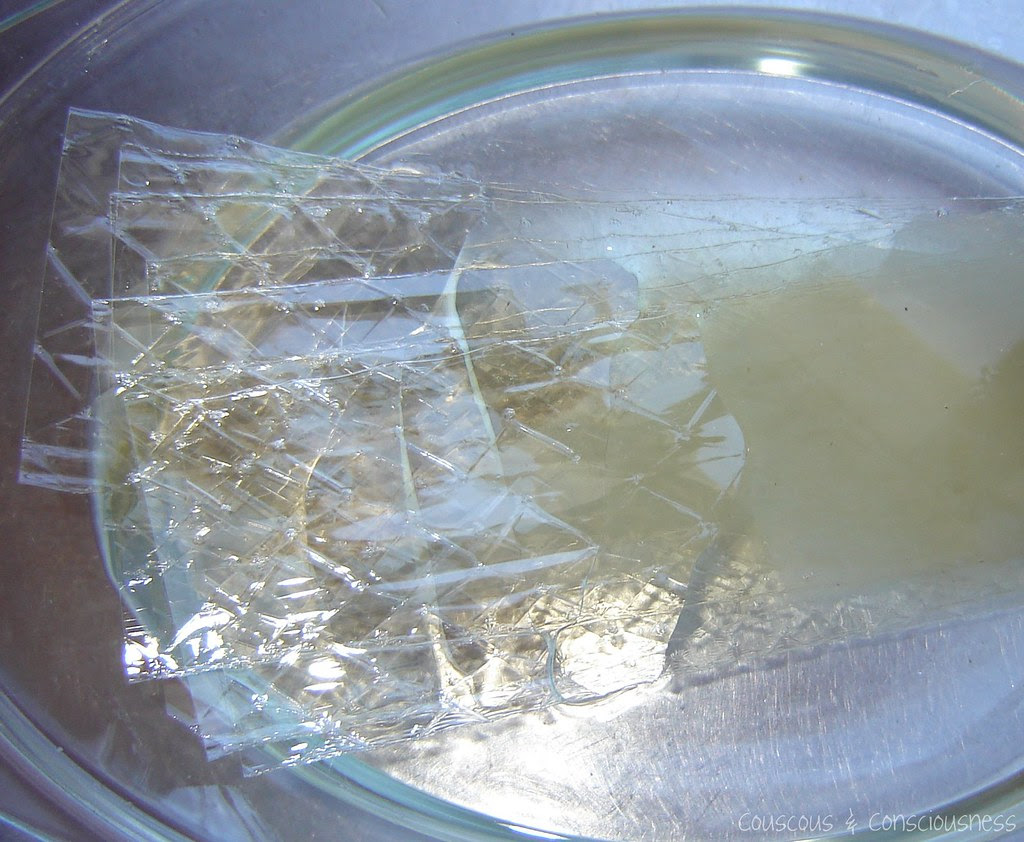 Leave it to soften for about 10 minutes.
Return the pan of champagne and saffron to the heat and bring back up to not-quite-boiling.  Remove the gelatine from the cold water - it will look like this .... 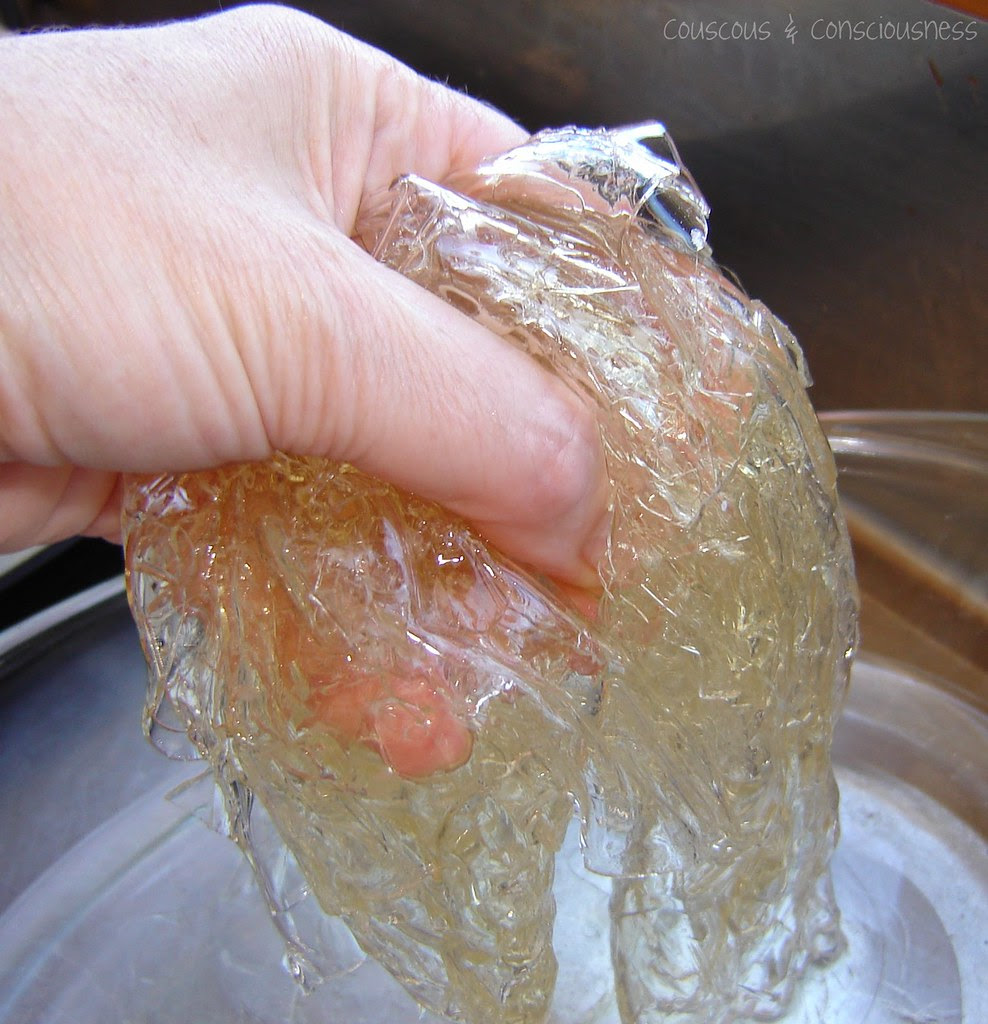 Squeeze out any excess water and add to the pan.  Whisk constantly until the gelatine has completely dissolved.  Remove from the heat, pour through a sieve into a clean bowl (or jug is even better), and allow to cool - reserve the saffron threads which will have gathered in the sieve.
Pour the rest of the Prosecco into the cooled saffron mixture, stir, and leave until it is completely cold and almost at setting point.
At this stage you can choose either to use one single bowl/mould or individual moulds, as I did.  Pour just enough of the liquid jelly to fill the moulds to a depth of about 0.5cm (1/4 inch) and set a ring of blueberries into the jelly - you are looking for just enough of the liquid to hold the blueberries in place but without allowing them to float.  You might also want to put one or two of those reserved saffron strands (tweezers are useful for this) in the middle - refer tasting notes below.  Put this into the fridge to set, keeping the rest of your jelly liquid at room temperature. 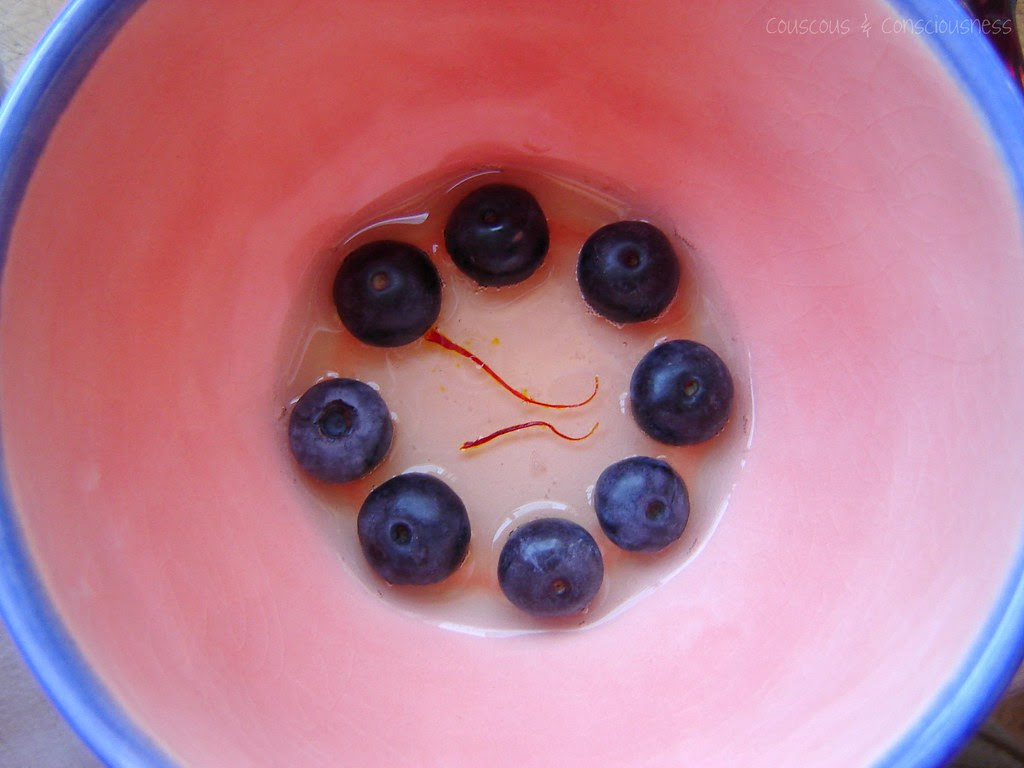 Once this has set (10-20 minutes), remove from the fridge, pour another layer of the liquid into the moulds - just enough to now cover the blueberries completely.  Return to the fridge to set - about another 10 minutes.  Remove and now fill the moulds to the desired level.
After the jelly has been completely set, you can unmould by very briefly dipping the mould into a bowl of warm water, place a serving plate over the top of the mould, and invert. 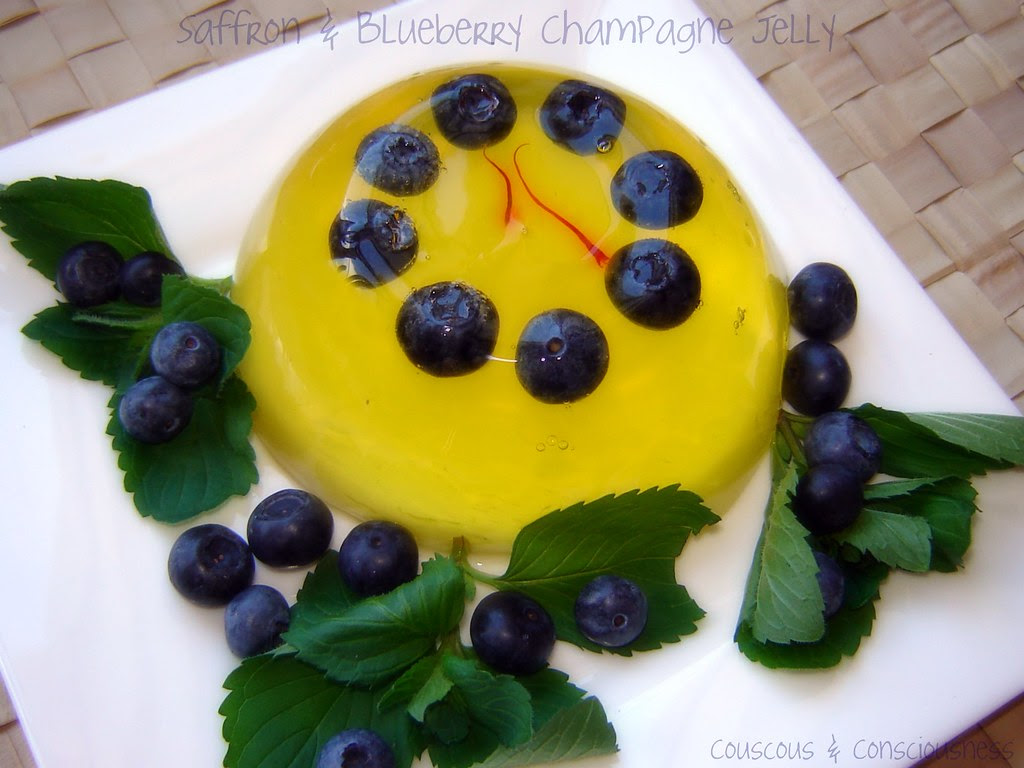 Tasting notes:  Even though I used less saffron than I might ordinarily use in a savoury dish, the flavour was still quite powerful, and initially although I thought it was interesting I can't say it "wowed" me - until I got a spoonful that had a blueberry in it as well!  The whole mouthful of saffron/champagne jelly and blueberry really worked and was a really nice combo.  Interestingly, I served this, as you can see, with some fresh mint leaves and blueberries - when I scooped up a bit of the plain jelly with one of the fresh blueberries on the plate it didn't taste as good as the blueberries which were actually in the jelly.  Also the bit of the jelly right in the middle, where the saffron strands are, didn't really appeal - it was just too intense for my palate - so, this is a pretty touch, but does nothing to enhance the taste, in my opinion.
So the final verdict - yes, I will try this again.  I think next time maybe just one or two less saffron threads, more lemon juice (I can taste the hint of lemon in here and I think a little more would really make this sing);  I would take the time to layer lots more blueberries into this;  and, personally, I wouldn't bother with those saffron strands in the middle.
The real bottom line for me, though, is that I got excited enough to explore an ingredient in a way I hadn't tried before, and I felt inspired to experiment and push my creative boundaries rather than just following a recipe.  Although it wasn't 100% successful, it was at about 85% and I don't mind sharing that, because this is the very essence of what I want "Make it with ..... Mondays" to be all about.  I want to develop the forum, the discussion, the exchange of ideas and knowledge;  so, if you have any suggestions as to how I could have made this better, I would love to hear from you.  When I posted my Saffron Fruit-and-Nut Bread a few days ago, I got a comment from Dan at The Haggis & The Herring telling me he really liked the idea and he would like dates in it - I couldn't agree more, dates would be great, especially with a bit of orange zest and juice, and so now I have another idea for a loaf of bread.  When we exchange these ideas we not only grow as individuals, but we also grow a "community".
If you have your own post using saffron that you would like to link up with "Make it with ..... Mondays" # 1 challenge saffron, you can do that at the bottom of this page, or here.
Also, don't forget about the free copy of the How to Cook Everything iPhone application which I'm giving away - full details here.  All comments and/or posts linked here automatically get an entry.
Posted by Couscous & Consciousness at 11:44 PM

Email ThisBlogThis!Share to TwitterShare to FacebookShare to Pinterest
Labels: blueberries, champagne, how to cook everything, iPhone, make it with ... mondays, recipe, saffron