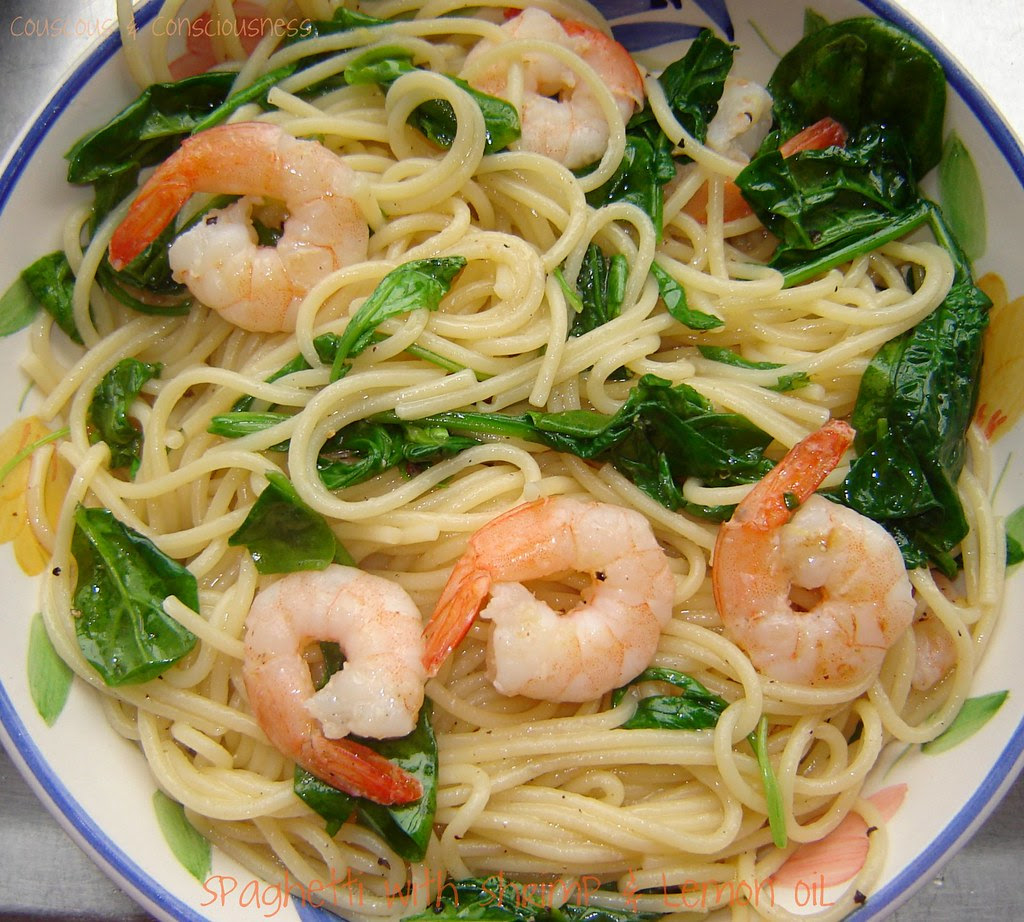 My very first visit to the United States was a four day business trip to San Francisco.  From New Zealand that was a long way to go for a two-hour meeting, but back then I worked in advertising and then was the 80s - an industry and an era both renowned for their excesses.   There is much about that trip that is to this day indelibly etched in my memory, but most significant of all were some wonderful food memories.  It was the first time I ever ate nachos and drank a margarita (well, actually, more than one);  at the marina in Sausalito I enjoyed a plate of succulent oysters and my first ever tuna melt;  I ate the most heavenly dish of snails, each in tiny little pots with little pastry lids at a restaurant in Union Square that was called something like Forneaux Ovens (I could stand corrected on that one);  and lunched on linguine with garlicky shrimp at a wonderful Italian restaurant in Ghirardelli Square.
This dish in particular was an absolute revelation to me - back then we didn't really have too many Italian restaurants in New Zealand, and the only pasta I had ever eaten up until that point in my life was spaghetti (only ever with a bolognese sauce) and macaroni elbows (either in a classic mac 'n' cheese or some kind of tuna bake).  Back then, if you wanted to buy olive oil you had to get it from the pharmacist.  Much has changed here in the last 30 years, but without a doubt that day in Ghirardelli Square was the day my love for Italian food bloomed, and it has been a growing passion ever since.
When our theme this week at I Heart Cooking Clubs, where as you know we are cooking with Giada de Laurentiis, was California Dreamin' her Linguine with Shrimp and Lemon Oil was the dish that immediately evoked for me those memories of California.  As it turned out I used spaghetti because that's what I had on hand, but linguine would be the ideal.  I hope you'll try this and bring a little bit of California into your kitchen.
Spaghetti with Shrimp & Lemon Oil
Adapted from "Giada's Kitchen

"
by Giada de Laurentiis
Serves 2
Click here for a printable copy of this recipe
For the lemon oil:
1/4 cup extra virgin olive oil
zest of 1/2 lemon
For the pasta:
250g (1/2 pound) spaghetti (or linguine)
1 tablespoon olive oil
1 clove garlic, minced
250g (1/2 pound) fresh shrimp, peeled & deveined
1 lemon, juice and zest
flaky sea salt
freshly ground black pepper
2 large handfuls of rocket (arugula) or spinach
freshly chopped Italian parsley for garnishing
Begin by making the lemon oil.  Put the 1/4 cup of olive oil into a small bowl.  Using a vegetable peeler, take off thin strips of the lemon peel and add them to the oil.  Take care to avoid any of the white pith, scraping it away from the peel if necessary.  Set aside to infuse (I actually did this the day before - not necessary, but the longer you allow it to infuse the better the flavour). 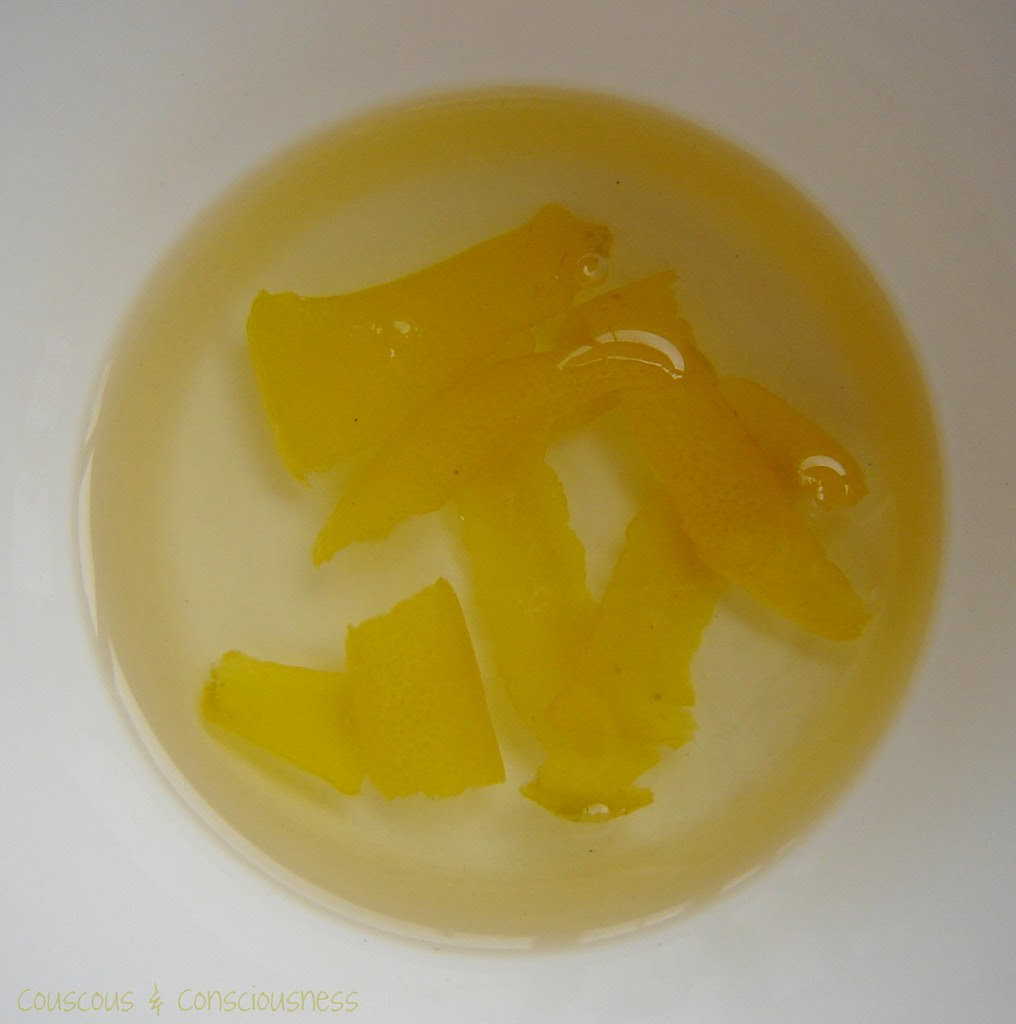 Bring a large pot of water to the boil over high heat, salt the water liberally, add the spaghetti and cook until al dente.  Drain and reserve about 1 cup of the pasta water.
While the pasta is cooking, warm the olive oil in a skillet over medium heat.  Add the garlic, cook for a minute, then add the shrimp and cook just until the shrimp turn pink. 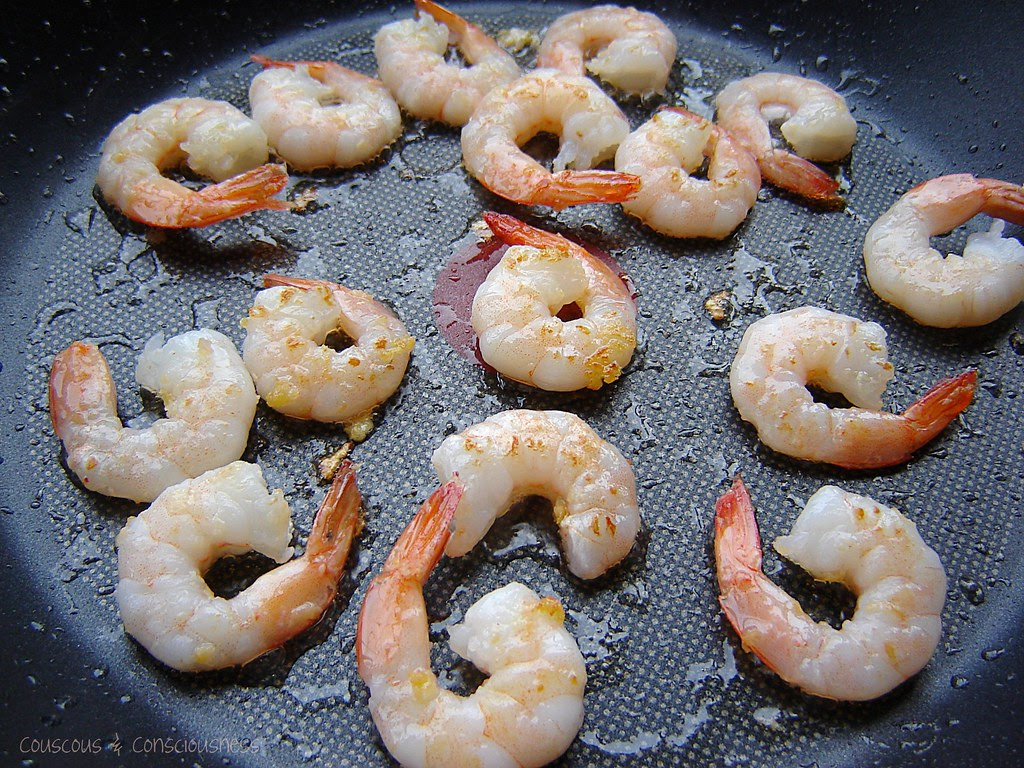 Add the cooked spaghetti, a little grated zest and most of the juice of the lemon, flaky sea salt and freshly ground pepper. 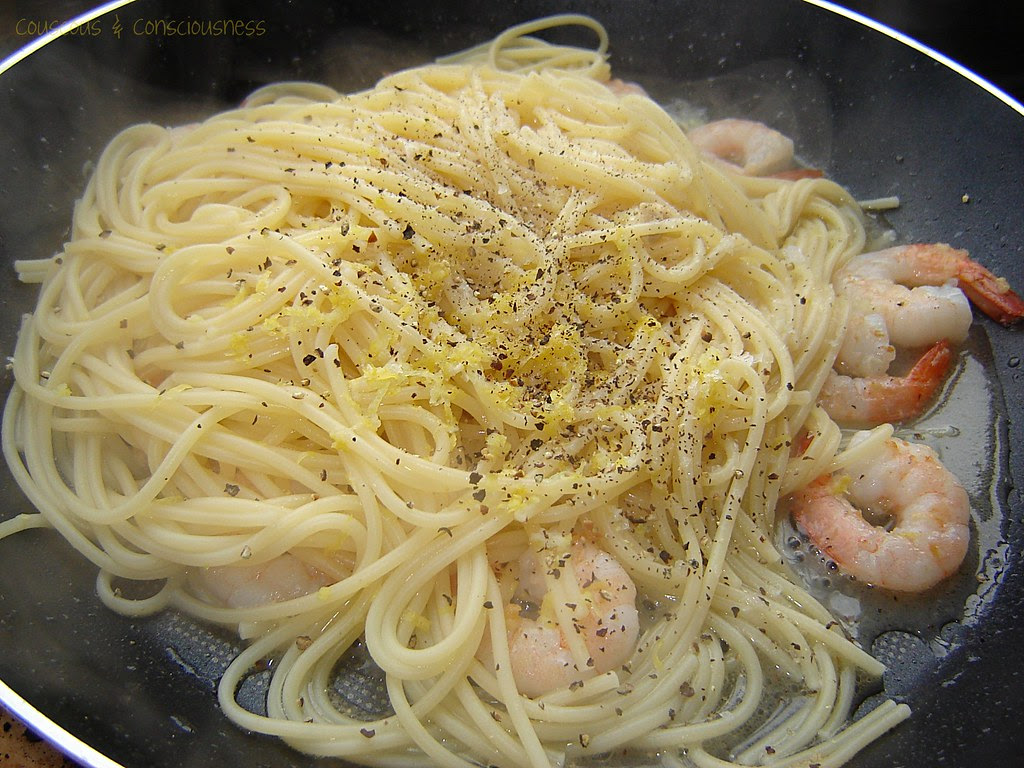 Toss well to combine, then turn off the heat and add the rocket or spinach (I used about equal quantities of both). 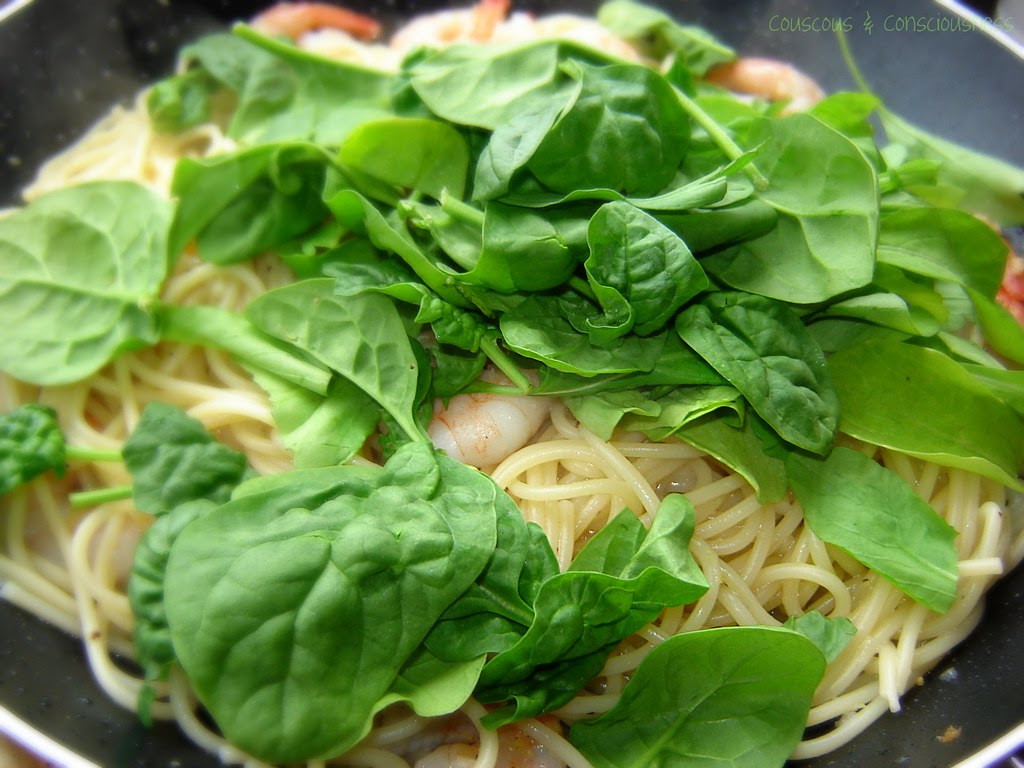 Drizzle liberally with the lemon oil (discarding the strips of zest), sprinkle over the chopped parsley.  Toss again to combine, adding a little of the pasta water if necessary, and serve immediately. 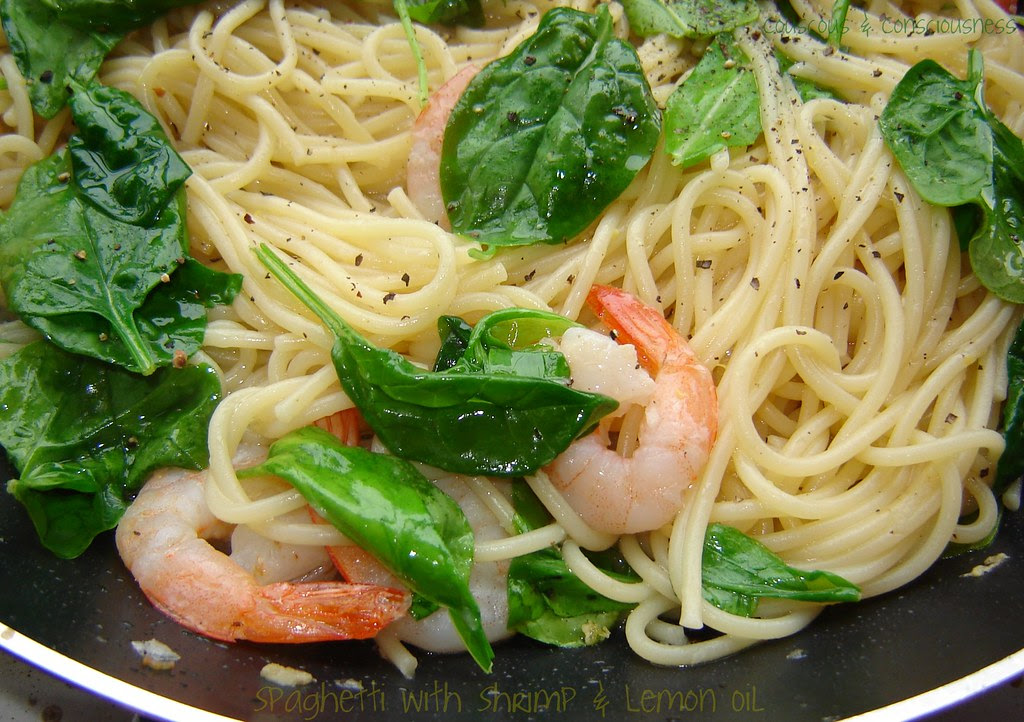 Close your eyes and imagine you're in California.


Interested in getting to know Giada a bit better?  Then do go and visit my friends at I Heart Cooking Clubs and see what they've all been cooking up ....

I'm also submitting this post to Presto Pasta Nights, which is being hosted this week by Jen at Tastes of Home - you will be able to see a full round-up of all the submissions there on Friday 28 January.   I'm looking forward to checking out a whole lot of new pasta dishes.
Posted by Couscous & Consciousness at 10:05 PM