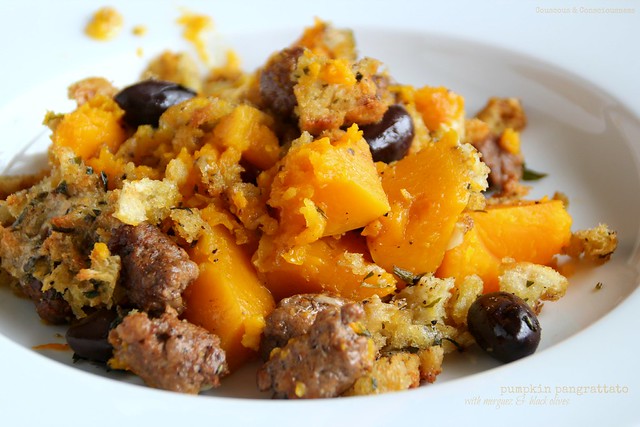 At I Heart Cooking Clubs this week we begin a new culinary journey with British cook, Nigel Slater.  Nigel is determinedly not a chef, rather a self-confessed amateur cook, who prides himself on producing food which is understated, home-style cooking.  We will be spending the next six months cooking his food, according to a different theme each week - an opportunity to explore his food in depth, and get to know the vast repertoire of recipes he offers through his books, television programmes and online sources.


I have a few Nigel Slater books in my collection, which I've used a bit and always enjoyed, but I have to be honest and say that I haven't used them nearly as much as I would like to have, so I'm really welcoming this opportunity.


For this week's dish I turned to Nigel's book Tender (Vol. 1).  In this book he chronicles tales about his vegetable garden. He talks of his dreams of self sufficiency, and describes how he transformed a small city garden into something which now produces the vegetables that have become the mainstay of his daily cooking.  Each chapter is a different vegetable, and offers advice on planting and harvesting, companion flavours and seasonings, and a variety of recipes.


Not only are all the recipes very simple and "do-able" for the average home cook, they are beautifully photographed, and the book is beautifully written.  Nigel's style is very "conversational" - the kind of information he would give you if he was cooking alongside you in the kitchen, and this style extends to the titles of many of the recipes.  Who wouldn't want to try "A quick cabbage supper with duck legs", "A tart of asparagus and tarragon", "Smoky aubergines and a punchy, bright-tasting dressing", or "An extremely moist chocolate beetroot cake with creme fraiche and poppy seeds"?


Leafing through the pages, something from the pumpkin department seemed perfect for an autumn dish, and when I stumbled across Nigel's "Pumpkin pangrattato with rosemary and orange" I knew that I had found my dish.  Of course you know that I can't leave well enough alone, and when I saw pumpkin mash with sausages on the very next page, I was convinced that I somehow had to work sausages into this dish.  My initial thoughts were to use some chorizo, but having picked up some nice, spicy, merguez sausages from my favourite butcher, I thought these would be a great accompaniment to the pumpkin.  I omitted chilli from the recipe, since the merguez is already spicy enough, but of course if you want the added heat, knock yourself out, and of course if you happen to be vegetarian then leave out the sausage and throw in a small, chopped red chilli or sprinkling of chilli flakes for a bit of heat.  I threw a handful of black olives into the mix as well, because I love pumpkin and olives together, and I mixed some little chunks of taleggio cheese into the breadcrumb topping, because after all what's not to love about a crunchy, cheesy topping on anything?!


This turned out to be a great dish with which to welcome Nigel to the IHCC kitchen.  With the addition of the sausage and olives, it made a pretty substantial meal, with a truckload of flavour and texture going on - in my eyes, always the hallmark of a great recipe.  You'll find the spicy nuggets of sausage and briny olives a great foil to the tender, sweet butternut squash;  the crunchy breadcrumb topping is a perfect compliment to the softness of the pumpkin;  and every so often you get little added explosions of flavour from the rosemary and orange.


In all, this is one of the best things I think I've made recently, and I will definitely be making it again.  There's easily enough going on here for this to make a substantial meal on its own, but would also make a great side dish as part of a larger meal if you were feeding a crowd.  Admittedly, this is not quite a throw it together in 5 minutes kind of meal, but neither is it an arduous labour intensive meal either.


I often ponder the scenario of someone asking me, "if I was to only make one dish from your blog, what should I make?"  I have in my head a shortlist of dishes I would recommend, and this dish definitely makes it onto my list.  All I can say is, "if you keep this up, Nigel, you and I are going to get along famously".  I hope you give it a try. 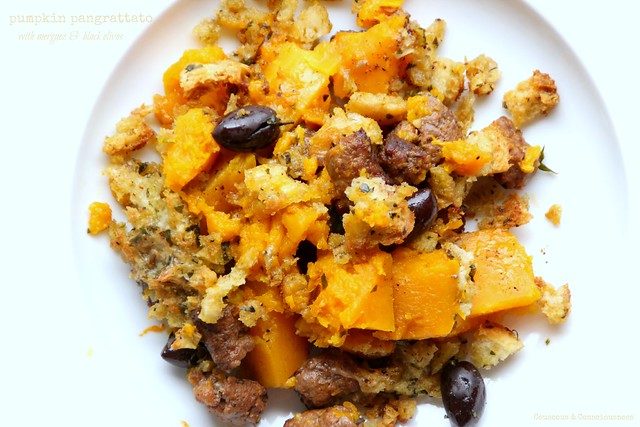 Pumpkin Pangrattato with Merguez Sausage & Black Olives Recipe
Adapted from a recipe by Nigel Slater
from Tender, Vol. 1
Makes 3 substantial servings, or 4 smaller servings
Click here for a printable copy of this recipe


Put pieces of butternut into a steamer set over boiling water, and steam until just tender to the point of a knife.  This may take up to 20 minutes, but start testing after 10 minutes, as you really don't want to overcook it at this stage.  Remove steamer from heat and set aside.


Meanwhile, remove casing from sausages, and break into bite-sized pieces. 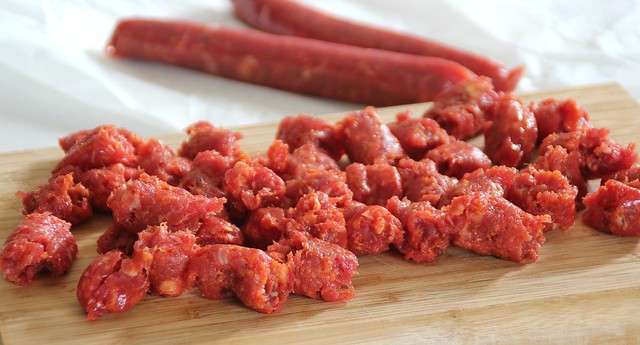 Heat a small amount of olive oil in a large, ovenproof frying pan (cast iron is ideal) over medium-high heat (see note below).  Add the chunks of sausage to the pan, and cook until golden brown all over.  Remove the sausage from the pan, and set aside.  Don't discard the fat which has been released from the sausages.   (Note:  if you don't have an ovenproof pan, don't worry, you can use a baking dish later on.)


Return the pan to heat, and reduce the heat to medium.  Depending on how much fat has come out of the sausages, you may need to add a little extra olive oil to the pan - you want about 4-5 tablespoons altogether.  Add the garlic, rosemary and orange zest to the pan.  As soon as the garlic becomes fragrant, add the breadcrumbs and parsley to the pan, and stir until the breadcrumbs are a pale golden colour.  Remove breadcrumbs to a medium sized bowl, but don't clean the pan.  Break cheese into small pieces, add to the breadcrumbs, and toss gently to distribute evenly amongst the crumbs.


Return sausages, butternut chunks and black olives to the pan (or use a shallow baking dish), distributing them evenly.  Season generously with salt and pepper, and dot little knobs of butter over the top. 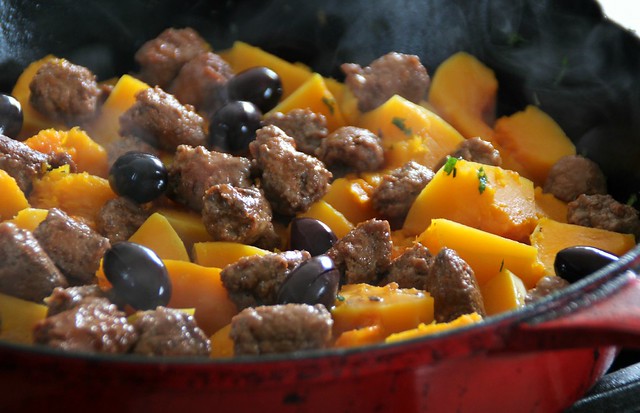 Tip the breadcrumbs over the top of the pumpkin and sausage in an even layer, and drizzle with a little extra olive oil.


Bake in the preheated oven for 35-40 minutes, until the crumbs are golden and crunchy and the pumpkin is thoroughly tender. 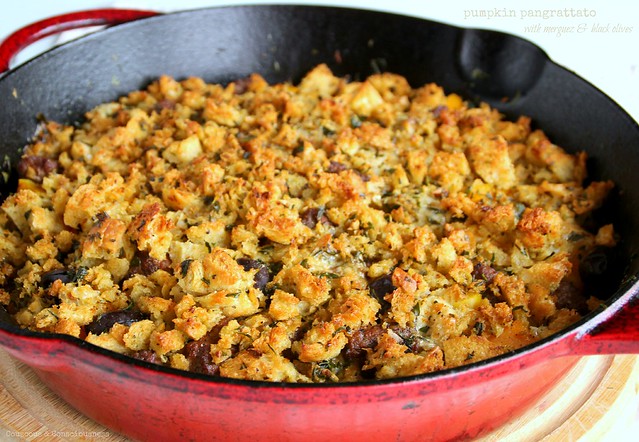 If you would like to get to know Nigel Slater a little better, and to see what everyone else has cooked up this week, then do and visit my friends at I Heart Cooking Clubs and check out the links ...

Posted by Couscous & Consciousness at 7:09 PM