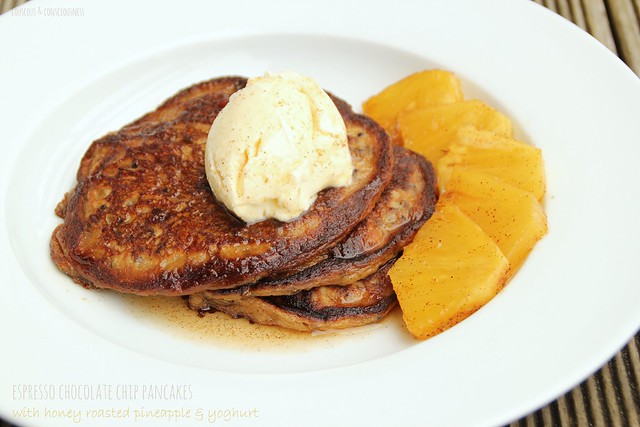 Today is a public holiday in New Zealand.  Not only does Labour Day commemorate the struggle for an eight-hour working day, but here it's also the day that really kicks off summer.  We are normally blessed with a hot sunny day on which everyone flocks to the beach and gets a nasty dose of sunburn, because somehow in our collective winter stupor we've forgotten about the great big hole in the ozone layer over New Zealand.  It's the day on which it is usually considered any risk of frost has passed and it is safe to plant tomatoes - we threw caution to the wind and planted ours last weekend.  No frost came, the sky didn't fall, the tomatoes appear to be thriving.


Unlike Labour Days passed, today is cool and breezy, low cloud is clinging to the hills around us, and rather than feeling the urge to flock to the beach, it felt more like a day for a late sleep-in, curl up on the sofa with a couple of movies, and enjoy a leisurely brunch.  A leisurely brunch in fact of espresso, chocolate chip pancakes, with a side of honey-roasted pineapple and yoghurt, and extra coffee.  Now I've got your attention, haven't I?!


It's Secret Recipe Club reveal day, and I can now tell you that my assigned blogger this month was the lovely Emily at Life on Food.  Having been born in Iowa, grown up in Georgia and Maine, Emily now lives in Connecticut with her husband, who also shares her passion for food and cooking.  Emily has a major in economics and works as a building consultant with colleges and universities.


Until this morning I wasn't hundred percent sure which one of Emily's many dishes I was going to make.  Emily has been blogging since 2009, and churning out on average around 300 posts a year, she gives new meaning to the word prolific.  That's a whole lot of dishes to choose from - just settling on a short list was pretty hard, let alone choosing just one.  My short list included New England Clam Chowder (although I'm not sharing that with you today, I will definitely be making this sometime soon), Lamb Meatballs with Toasted Orzo (this just reminds me of sunshine and Greek holidays), Cinnamon Rolls, and Shrimp Thai Noodles with Spicy Peanut Sauce.


But in the end, today is unquestionably a day for pancakes, and I love the "grown-up-ness" of Emily's Coffee Chocolate Chip Pancakes.  These are pancakes you make for a couple of lazy adults who just want to swan around for the day, not the ones you whip up for the kids before they rush out the door to sports day.  Emily's pancakes used instant coffee powder, but as we never have instant coffee around here, I brewed a double shot of espresso instead.  I didn't have any chocolate chips on hand either, so I subbed in some cacao nibs.  I think the slightly "bitter" flavour is another element that elevates these pancakes to grown up status. The main "liquid" ingredient in the batter is yoghurt, but I found, once I'd mixed up my batter, that it was very thick - I think this was probably because I only have very thick Greek-style yoghurt rather than a more "runny" variety, so I ended up having to add about 1/2 to 3/4 cup of milk to loosen the batter to the right consistency.  Use what you have and adjust accordingly.  The coffee flavour in these pancakes is not overt - it just adds that certain "je ne sais quoi" that gives a depth of flavour and leaves you wondering what it is.  Someone around here who hates coffee with a passion, thought they tasted pretty good - when he asked me what was in them, I said it was zucchini - never, ever would I let on that it was coffee.  Hopefully my secret is safe with all of you out there.


I served these pancakes with a side of this Honey Roasted Pineapple and a dollop of natural yoghurt.  It only takes a moment to prepare, and it takes care of itself in the oven while you cook the pancakes.  The vanilla and cinnamon perfumed honey and pineapple sauce hit just the right flavour notes drizzled over the pancakes, but if you just want the pancakes straight up maple syrup, or even just a generous knob of butter, would be perfect. 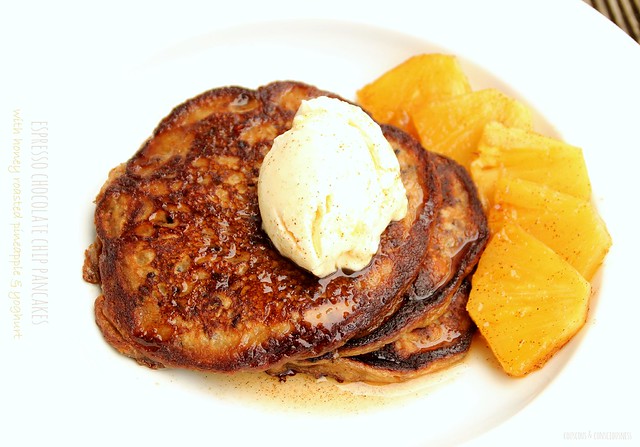 
Sift together flour, baking powder, and baking soda into a medium-sized bowl.  Add sugar and salt and mix to combine.


In a small bowl, whisk together espresso, melted butter, egg and yoghurt, until everything is well combined.


Make a well in the centre of the dry ingredients.  Add the yoghurt mixture, and mix until only just combined.  Thin with milk if necessary.  Fold in the cacao nibs.

Secret Recipe Club is a way to not only find, but share new blogs.  Each month, one member is assigned to another member from their group "secretly" (hence the name).  That person selects a recipe (or more) to make, photograph, and then will draft up a blog post.  Everyone in the group posts on the same Monday together and gets to see who had their blog and what recipe(s) they chose.  It's such a fun experience and it's a great way to get new followers, too.  There are always new blogs to discover and our club has plenty to offer!  If you are a food blogger and interested in joining the Secret Recipe Club, be sure to check out the Join SRC page.


Posted by Couscous & Consciousness at 5:00 PM