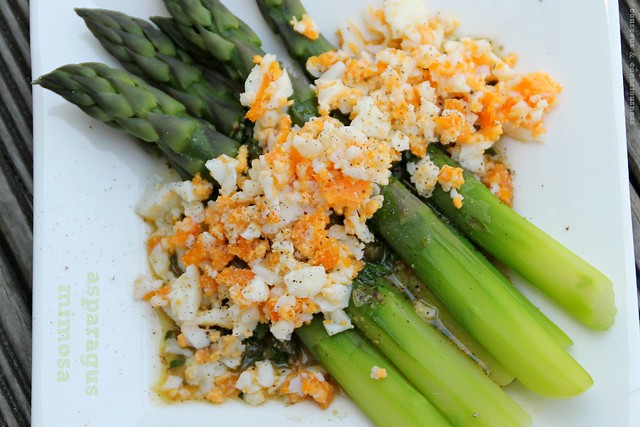 I have no notion which came first ... the chicken or the egg?  That's our theme this week at I Heart Cooking Clubs, which gives us the opportunity to explore Diana Henry dishes featuring, naturally enough, chicken or eggs.  And, whilst I'm pretty certain no one is going to come up with a definitive answer to that age old question, some of the dishes my friends have come up with would definitely answer just about any other woes.


I was certainly looking for a dish to satisfy a few woes myself this week.  We've had two weeks of builders, gib stoppers, electricians, etc doing flood damage repairs on our house, including ripping out and replacing the kitchen and dining room ceiling.  This would be disruptive enough in itself, but the fact that the workmanship and trade practices of some of these workmen left a bit to be desired, has been frustrating at best, and at times downright infuriating.


So I was looking for something verging on comfort food, which meant I was heading down the egg route, rather than the chicken route.  When all is said and done, is there anything more comforting than a simple, soft boiled egg?!


After picking up a fresh bunch of asparagus (hands down my favourite vegetable) at the market yesterday, I thought this asparagus mimosa would make a delightful, light and simple lunch, before tackling the big post-repair clean-up - a project which has kept me busy for most of the weekend.


Now, let's be truthful here - asparagus mimosa is nothing new - it's one of those classic dishes that has been around forever.  But, to be honest, I have often wondered what all the fuss is about ... after all, just how good could a few asparagus spears with a crumbled boiled egg over the top really be.


Well, I don't know about the original, but Diana Henry's version provided proof positive, if ever it were needed (and really I've said it here so often I should not have been surprised), that combining a few good quality ingredients, and "messing with them" as little as possible, will deliver sensational results.  Every! Single! Time!


Here simple steamed asparagus stems, drizzled with a lemony-herby-caper dressing, and topped with a soft-boiled free range egg, delivers on every front.  It provides all the comfort of dunking asparagus spears straight into a soft boiled egg in a cup, with the added flavour punch of the dressing, and turns it into a dish which is easily elegant enough to serve to company.


This would make a great appetiser as part of a large meal, but is also the perfect dish for a light spring lunch.  You don't need to be too particular about quantities - I've just given you a rough guide for one person, and you can easily multiply it up to feed as many as you like.


Important note:  A dish such as this is all about the ingredients, so use the best you can get your hands on.  Use only in-season asparagus IN YOUR PART OF THE WORLD.  Right now, I'm sure those of you in the northern hemisphere can probably buy asparagus shipped from New Zealand, or Australia, or South Africa - please don't!  Bookmark this recipe instead and wait until spring returns.  If you have a local farmer's market where you can buy asparagus picked fresh that morning, even better.  A juicy, organic lemon picked straight from the tree, and flat-leaf parsley picked straight from the garden, are perfect if you have them, but I know that's not always possible.  Good quality capers are a must - I like the ones packed in salt, but brined are fine too.  Extra virgin olive oil, should be the best that you can afford, and it goes without saying that only a free-range organic egg will do.  Also, although I never bother peeling my asparagus, I think it is worth doing here.  In a dish so simple, in which you really want the ingredients to shine in every possible way, it just seems right - it looks beautiful, and really helps the asparagus to soak up that dressing. 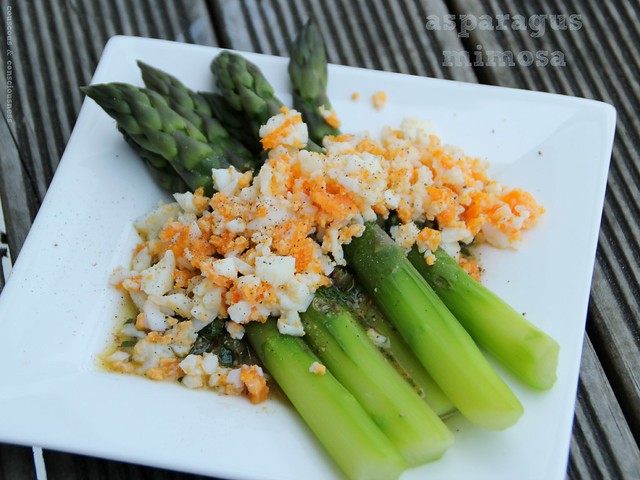 
Place egg in a small pot, cover with cold water, and bring to the boil.  Boil for four minutes.  Remove egg with a slotted spoon and place in a bowl of cold water, until egg has cooled enough to handle, but is still warm.


In a small bowl, whisk together lemon juice, olive oil, mustard, salt and pepper, until well combined.  Stir in the parsley, and capers.  Set aside.


Snap the woody ends off the asparagus spears, and peel the ends.  Boil the asparagus until just tender to the tip of a sharp knife - about four minutes, depending on the thickness of the spears.


Meanwhile, peel the egg, place on a plate or board and mash with a fork, until crumbled and yolk and white mixed together.


Drain asparagus as soon as it is ready and place on a serving plate.  Drizzle over a generous amount of the dressing, and spoon the crumbled egg over the middle of the asparagus.  Finish with another drizzle of olive oil if you like.

Posted by Couscous & Consciousness at 4:47 PM