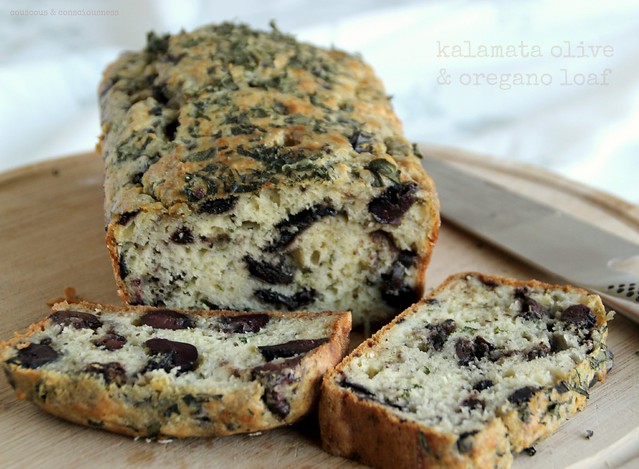 Since becoming a member of Secret Recipe Club*, I've discovered some great, previously unknown to me blogs, and one blog which became a firm favourite right from the start was Karen's Kitchen Stories.


Karen lives in Southern California;  works in recruitment and teaches part time;  has two grown children and two grandchildren;  and has an obsession with baking bread - sourdough in particular - which is immediately obvious when you visit her blog.


Karen's recipe index (and hats off that she actually has one, which in itself elevates her blog to "favourite" status in my books) boasts no less than 182 recipes under the heading "Bread, Flatbread, Yeasted Crackers, and Rolls" - yes, I did actually count them, which may or may not speak volumes about my own obsessiveness.  Put together the recipes under the headings of "Cakes & Cheesecakes", "Cookies, Brownies & Bars",  and "Cupcakes & Muffins", and I'm pretty sure you would find another 180 recipes.  Clearly this woman is a baking Goliath.


Since I am most definitely not, as I have told you before many times, a proficient baker, when I was assigned to Karen's blog for this month's SRC reveal I was both thrilled (a challenge is always exciting) and terrified in equal measure.


Although I don't have a particularly deft touch for making bread, having a go at making sourdough is one of those things which has been on my cooking challenge bucket list for a long time.  There's no question that if making sourdough bread (or any kind of bread) is on your path, Karen's blog would be a fantastic place to start, and within a couple of hours of getting my assignment I'd bookmarked several recipes that I thought would make the shortlist:  No Knead Chocolate Cherry Pecan Bread, Golden Raisin and Fennel Sourdough Pocket Bread, San Francisco Sourdough Bread, and Sourdough Rosemary Bread with Olive Oil.

The only problem is that making sourdough bread requires a certain amount of planning, and with a whole lot of other life stuff getting in the way around our house at the moment, the requisite planning to produce these wonderful breads just hasn't been there.  And then salvation presented itself under the heading of "Quickbreads" - definitely a little better suited to my lifestyle at the moment, although I'm still promising myself that when life slows down a little I will be trying my hand at one of those sourdough loaves. 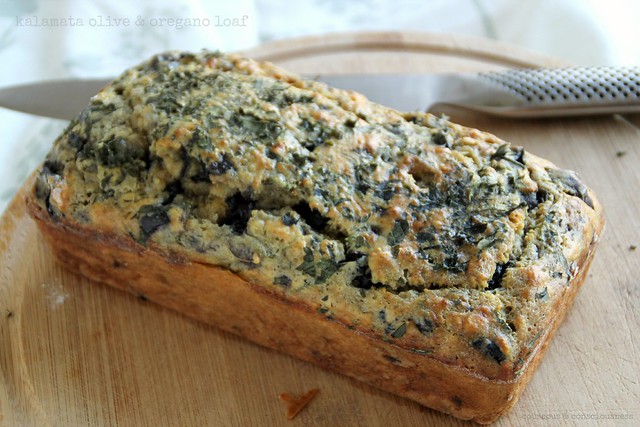 The recipe for Kalamata Olive & Oregano Mini Loaves just about leapt out of the screen at me.  I didn't have any of the cute little mini loaf tins that Karen does, but the recipe did provide for preparing one large loaf as an alternative.  I could do that.  I also happened to have all the ingredients required on hand - except for buttermilk, which can easily enough be made at home by mixing one cup of milk with a tablespoon of lemon juice and letting it stand for 10 minutes.

Karen's original recipe included an onion, lightly sauteed in olive oil before mixing into the batter, which I omitted as I'm just not a huge fan of onions and especially not in baked goods.  Other than that I pretty much followed the recipe exactly.


This loaf has a wonderfully light and moist texture, and the brininess of the olives really shines here.  This is definitely a loaf I would make again.  It is so bursting with flavour that it actually needs no accompaniment, but it would nevertheless be a great "bread" to include with an antipasto platter, or to serve alongside your favourite soup.  I would definitely make this again, and I think a sprinkling of Parmesan over the top might be a nice change-up too. 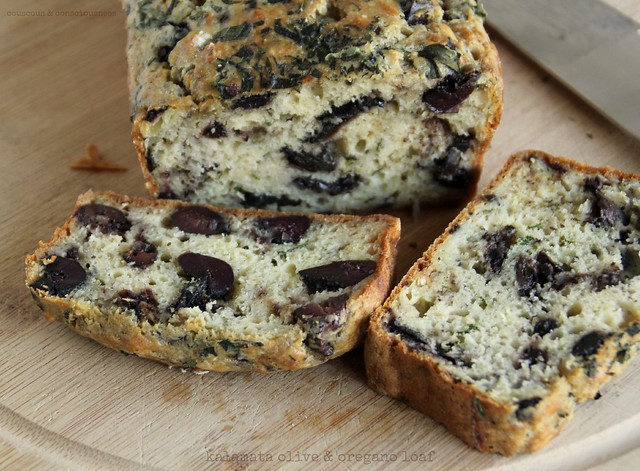 
Sift together flour and baking soda into a large bowl, and mix in the salt.


In a separate bowl, whisk together the buttermilk, melted butter and eggs.


Make a well in the centre of the dry ingredients.  Pour the buttermilk mixture into the well and stir until only just combined.  Fold in the olives and oregano.


Pour the mixture into the prepared loaf tin and sprinkle the tops with more chopped oregano.


Bake for 25 to 30 minutes, or until a skewer inserted into the centre comes out clean.  Allow to cool for at least 15 minutes in the tin before transferring to a cooling rack and serving.


*  So what's this Secret Recipe Club I've been talking about?  The club has over a hundred members, divided into four groups, and each month one member is assigned (in secret) to another member from their group.  That person then selects a recipe (or more) to make, photograph, and prepare a blog post - all in secret.  Then everyone in the group posts their recipe on the same day, and of course the secret is then out.  It's a always a thrill to find out who has posted something from your own blog, and to meet and discover some new blogs.   If you are a food blogger and interested in joining the Secret Recipe Club, be sure to check out the Join SRC page.

An InLinkz Link-up
Posted by Couscous & Consciousness at 6:00 PM