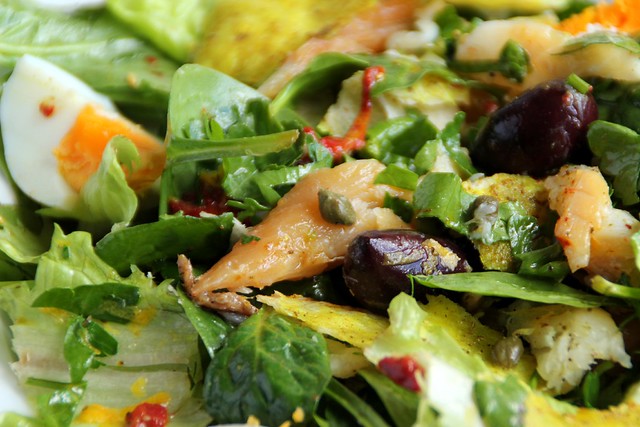 Just when I was thinking he couldn't surprise me any longer, Yotam Ottolenghi comes along and damn nearly blew my mind.


I've been cooking and posting Ottolenghi dishes for the last four and a half years, when I first introduced him to you with this Baked Aubergine with Saffron Yoghurt Sauce and Pomegranate.  We often hear the term "genre-bending" applied to movies, novels, works of art, and pieces of music - I'm not sure if such a term can be applied to food and cooking, but if it can then I'm sure it certainly applies here.  That was a dish unlike anything I'd eaten or cooked before, and it was for me the beginning of a whole new food journey.


Over this time, I've been stunned by the wonderful flavour and texture combinations Ottolenghi pulls together.  He's introduced me to unique ingredients, which I had never previously heard of, and which have now become part of my every day pantry staples.


Yet, even though ingredients such as harissa paste, preserved lemons, pomegranate molasses, za'atar, dried Persian limes, rose petals, and orange flower water, have all now become almost "common place" in my kitchen, the flavour punch that these ingredients deliver is anything but.


So it should have come as no surprise that this dish, adapted from Ottolenghi's book Jerusalem, completely knocked my socks off, but I was still seriously "wowed" by it. 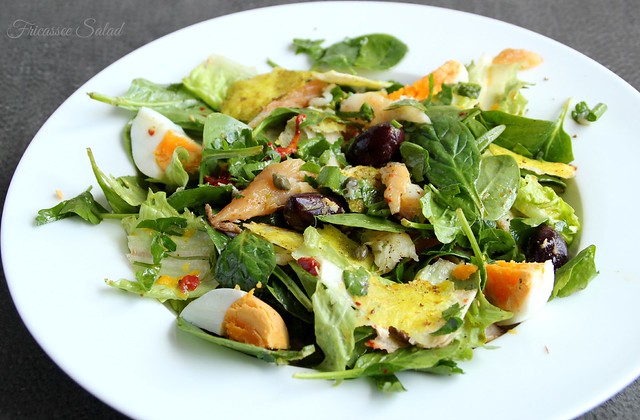 In his preface to the recipe, Ottolenghi says that "This salad is a deconstruction of Tunisian fricassee - a fried bun stuffed with tuna, harissa, olives, anchovies, a spicy pumpkin relish, pickled lemon, cooked potato and hard boiled egg."  He remarks that the resemblance to the classic French Nicoise salad is no coincidence, "and is evidence of the interaction between French and Tunisian cuisines during the years of French occupation".


I made a few changes to the recipe, mostly for the sake of convenience.  Firstly, the original recipe called for fresh tuna to be gently poached in oil and then left to stand for 24 hours.  For ethical reasons, much as I love tuna, I choose not to eat it.  And, although, I thought this technique could just as readily be applied to a nice piece of salmon, I was after lunch in half an hour - not tomorrow.  Ottolenghi does suggest a good canned tuna as a substitute for the confiting process, but it turned out I had a nice piece of smoked mackerel on hand and decided that would make an acceptable alternative.  Ottolenghi's recipe also calls for boiling potatoes in water flavoured with plenty of turmeric, but again I was looking for something a little more instant.  Instead I brushed a flour tortilla (any flat bread would do) with a mixture of olive oil and turmeric, for that gorgeous golden colour, and sprinkled it with a little za'atar for good measure, then baked until crisp, and crumbled it into the salad.


I'm sure the original recipe is sensational, and I will definitely take the time to make it as written (subbing in some salmon for the tuna) very soon, but this shortcut version made a fast, flavourful lunch that ticked all the boxes for me.  The bold combination of harissa, anchovies, black olives, capers, and preserved lemons packed a flavour punch that delivered so much more than I expected.


If you own a copy of Jerusalem, you will know that every time you pick it up (constantly), there are a couple of recipes that you frequently tell yourself "I have to make that", and yet somehow it hasn't happened yet.  Our mandate this month at Tasting Jerusalem* group is to do just that.  I had a couple of recipes lined up and let me tell you this was not one of them.  This was one of the recipes that I've kind of just skimmed over so many times and, if it wasn't for the fact that I was looking for lunch and recognised that I had pretty much all the ingredients on hand, I probably would have done so again.  I'm ever so grateful that this recipe stopped me in my tracks - it's worth so much more than a fleeting glance, and has definitely been bookmarked by me now as one of the standout recipes in the book.  I hope you'll give this a try. 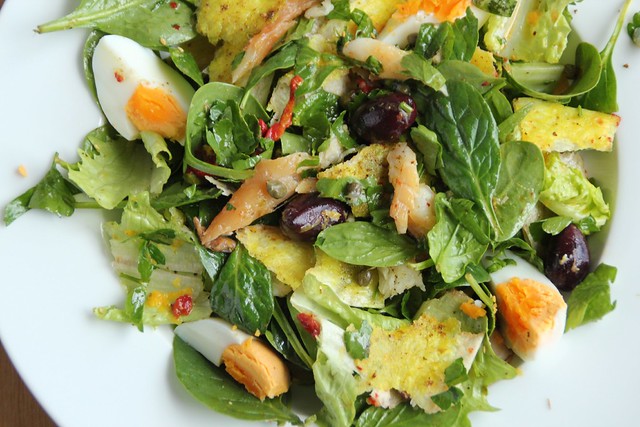 
Preheat oven to 180 degrees C (350 degrees F).  Mix 1 tablespoon of extra virgin olive oil and the turmeric together to make a paste, and brush over the surface of the flour tortilla.  Sprinkle liberally with za-atar. (If you don't have za'atar, try a sprinkling of dried thyme and sesame seeds instead.)  Place on a tray and bake in the preheated oven until puffed and crispy - this will only take a few minutes.  Remove from oven and set aside to cool.  It will crisp up some more as it cools down.


Place anchovies, harissa paste, capers, black olives and preserved lemon rind in a small bowl.  Add plenty of freshly ground black pepper and a generous slosh of olive oil (I used the oil that the roasted peppers had been preserved in).  Toss together gently to combine.


Place salad greens, parsley, red peppers, and flakes of smoked fish in a large bowl.  Season with just a touch of flaky sea salt, and add the grated zest of the lemon, along with its juice.  Gently combine.


Now add the anchovy mixture to the salad bowl, and toss gently to combine everything well.  Place everything in a serving bowl.  Arrange boiled eggs over the top, and finish with another drizzle of extra virgin olive oil.  Serve immediately.


If you're interested in more great food from Ottolenghi check out Jerusalem and his other great titles available from Amazon USA, Amazon UK or Fishpond NZ.


* Have a look also at what my "Tasting Jerusalem" friends have been doing - you'll find plenty of great inspiration. (“Tasting Jerusalem is a virtual cooking community exploring the vibrant flavors and cuisine of the Middle East through the lens of “Jerusalem: A Cookbook” by Ottolenghi and Tamimi published by Ten Speed Press. You can follow along and cook with us by subscribing to omgyummy.com, following the hashtag #TastingJrslm on Twitter and Instagram, liking our Facebook page or joining our Google+ Community and finally checking out all of our groups’ dishes on Pinterest.”)

Posted by Couscous & Consciousness at 7:33 AM