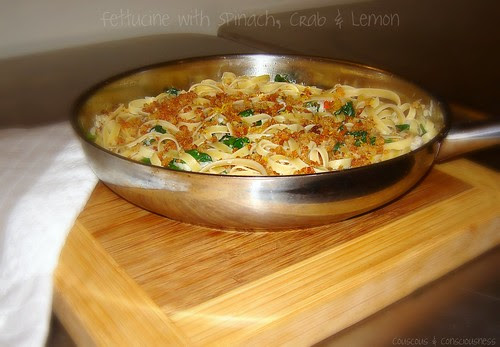 Thank you to so many of you, who stopped by my blog over the last week and left your lovely messages of support.  I had certainly missed you all and it has been wonderful to reconnect with so many of you again.
As I am now slowly starting to get back on my feet, I was eager to join back in with the I Heart Cooking Clubs group - I have always enjoyed cooking along with a fantastic group of people here, and in the short time that I have been gone they have taken up with a new chef (as they do every six months).  So now they are cooking with Jamie Oliver, and the theme this week is "Plenty-o-Pasta".  Well you all know how much I like a good pasta dish, so I didn't need any extra encouragement to take this opportunity to join back in with the group, and push along a little further in getting back into my "blogging-stride".
So I decided to seek inspiration in a copy of the Jamie Magazine Recipe Yearbook 2009/10

that Alli (Pease Pudding) had very kindly left me as bedside reading - I felt sure there would be a pasta dish there which would tempt my taste buds, and I was not disappointed.  In fact, not surprisingly, there were several recipes for some great looking pasta dishes - but it was a recipe for Spinach & Lemon Linguine that really captivated my interest, and I decided that just such a dish would be the perfect home for a beautiful big bunch of fresh spinach I had picked up last weekend at the Hobsonville Point Farmers Market.  (This is a relatively small local market, but there are a number of excellent and innovative suppliers, and the quality of all the produce was absolutely outstanding.)
Now, I did tweak the recipe a little.  Firstly, I didn't have any linguine on hand, but I did happen to have a box of fettucine in the cupboard which I felt would make a perfectly acceptable substitute.  While I was there, I also discovered a tin of crab meat in the cupboard and thought that would make a great addition - and it did.  The original recipe calls for a large red chilli, but I had some of those teeny, tiny, but very hot birds eye chillies which I had also bought at the market and used one of those instead.  It may have been tiny but it still delivered a bit of heat and made my lips tingle.  I also cut back on the garlic a bit, using only one clove instead of the three in the original recipe, simply because too much garlic when you're getting up-close and personal with your yoga students can be a little unpleasant - so if you like garlicky feel free to add more.  Lastly, Jamie suggests serving with a grating of fresh parmesan (optionally);  however, because I had added the crab meat I decided to leave out the parmesan.  Instead I tried a couple of different serving alternatives, which you can read about in the recipe notes.
This was a great pasta dish - fresh and flavourful, plenty of great texture, and very quick to prepare - another one of those dishes that comes together literally in just the time it takes to boil water and cook pasta.  It's absolutely my kind of pasta dish, and I will definitely make it again - I hope you'll try it. 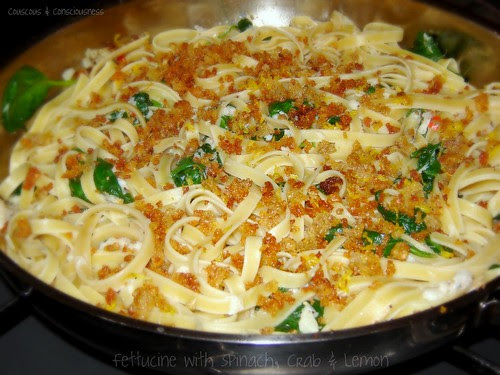 Makes 2 generous servings
Click here for a printable copy of this recipe
250g fettucine
2 tablespoons olive oil
1 cup fresh breadcrumbs
grated zest of 1 lemon
2 tablespoons olive oil
1 clove of garlic, finely chopped
1 small, hot, birds-eye chilli, finely chopped
170g crab meat
200g spinach
juice of 1 lemon
flaky sea salt & freshly ground black pepper
ricotta cheese/poached egg to serve
(optional additions - see note at end of recipe)
Bring a large pan of water to the boil over high heat.  Once it is boiling, salt the water liberally, then add the pasta and cook until al dente according to the directions on the packet.
While the pasta is cooking, heat the first quantity of olive oil in a large skillet over medium heat, add the breadcrumbs, and fry until crispy and golden.  Remove breadcrumbs to a paper towel to drain, then mix through the grated lemon zest, and set aside.
Return the pan to the heat, and add the second quantity of olive oil.  Add the chilli and garlic, and cook for a moment or two, just until the garlic begins to turn golden.  Add the crab meat, and continue stirring for a couple of minutes, then add the spinach and continue cooking until the spinach has wilted.  Season to taste with flaky sea salt and freshly ground black pepper.
Reserve a cup of the pasta water and set aside.  Drain the pasta, and then add it to the pan with the spinach and crab.  Add the lemon juice, and also stir through a little of the reserved pasta water if it seems necessary.
Sprinkle the mixture of lemon zest and breadcrumbs over the top and serve immediately.
Note: Although this quantity made two large helpings, as mentioned, I was actually eating alone so I ate it over two nights.  On the first night, I added a couple of generous spoonfuls of soft ricotta cheese and stirred it through before adding the breadcrumb topping.  This added a nice creaminess and reinforced the lemoniness of the dish - definitely a good addition.  On the second night, I reheated the leftovers and served a poached egg on top - a runny yolk to fork through the pasta being of paramount importance here.  Personally, this was my favourite way of serving it and I only wished that I had done this on the first night, when of course the pasta was at its best rather than the reheated version.  Please note, if you don’t like eggs with runny yolks, don’t bother with this variation as a poached egg on top with a hard yolk will do absolutely nothing for this dish whatsoever.  Either of these additions is entirely optional and the dish will not suffer in anyway if you leave them out entirely - it has more than enough going on to stand on its own without any added extras. 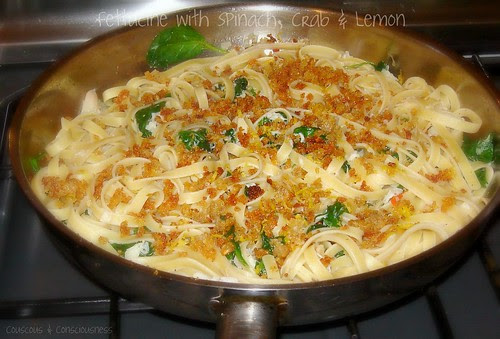 Posted by Couscous & Consciousness at 11:04 PM