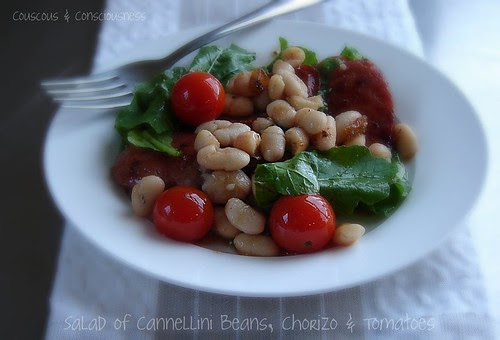 Another week has gone past in a flash, as I have been busy preparing to leave for six glorious weeks on a yoga retreat in the Greek Islands - it’s a filthy job I know, but someone has to do it, and really who better than me.  If it’s any consolation, I am drafting this somewhere over the Pacific on the 10-1/2 hour flight to Singapore, where I hope to actually get it posted during the 5 hour wait for my 12 hour flight to Munich - by the time I finally get to Athens, I will have had about 37 hours of travelling, which is the downside of living at the bottom of the world.
After the last few months of stress, and more than a little heartache, following the Christchurch earthquake back in February, this trip offers plenty of reprieve - an opportunity to recharge both my yoga and emotional batteries;  a time for reflection and renewal;  a time to reconnect with my wonderful yoga teachers, Graeme & Leonie Northfield, as well as with special friends;  a time, no doubt, to make some new friends;  and almost certainly an opportunity for fabulous food, which you will no doubt hear more about over the next few weeks.  Oh, and did I mention swimming and the suntan?!
Speaking of fabulous food, it’s time for me to share my weekly contribution with the I Heart Cooking Clubs group.  You know that we are cooking with Jamie Oliver, who has an absolute abundance of fabulous recipes to choose from, and our theme this week is Pot Luck.  Everyone in the group loves it when we have our monthly Pot Luck, as that is the time they turn to that special recipe that they’ve had bookmarked for ages just waiting for the right occasion to share it.  There are some wonderful bloggers in this group and I know that everyone will  be pulling out all the stops this week, so for plenty of fabulous food and inspiration go and visit my friends at IHCC.
As for me, it was not so much a case of pulling out all the stops, as it was of pulling out a few remnants from the back of the fridge and pantry that needed to be used up before going away.  I discovered a chorizo sausage, some cherry tomatoes, and a bag of rocket, all needing to be turned into something edible.  Adding a can of cannellini beans to the mix, I made this salad which I had seen Jamie Oliver make on TV once - I think it was an episode of Jamie Does Spain, but I can’t be certain as I can’t find the original recipe anywhere.  So you are just going to have to take it on faith that I saw him make something like this, and this is my interpretation of it.
This makes a great light meal for two, served with some good, crusty, bread, or would also make a great accompanying side dish to some lamb chops or fish.
Salad of Cannellini Beans, Chorizo & Tomatoes Recipe
Inspired by a recipe by Jamie Oliver
(Serves 2 as a light meal)
Click here for a printable copy of this recipe
1 tin cannellini beans, drained and rinsed
flaky sea salt & freshly ground pepper
2 tablespoons extra virgin olive oil
1 large chorizo sausage, sliced about 3mm (1/8”) thick
1 shallot, thinly sliced
2 cloves garlic, peeled - leave cloves whole, but smash slightly
20 cherry tomatoes
extra virgin olive oil
red wine vinegar
Drain and rinse the cannellini beans, put into a medium size bowl, season well with flaky sea salt & freshly ground pepper, toss well, and set aside.
Heat the extra virgin olive oil in a large skillet over medium heat.  Add the sliced chorizo sausage to the pan, and cook until starting to brown around the edges.  It will render out quite a lot of its own fat.  Remove the sausage from the pan, leaving the fat behind in the pan, and add the sausage to the bowl with the beans.
Return the skillet to the heat, add the shallot and smashed garlic cloves to the pan, along with the cherry tomatoes.  As soon as the garlic starts to turn golden brown and the tomatoes start to pop, remove the pan from the heat.  Discard the garlic cloves, and tip the entire contents of the pan (including all of the oil) into the bowl with the beans and sausage.
Add a good slosh of the red wine vinegar (about a tablespoon) to the bowl, season again with flaky sea salt & freshly ground black pepper, and mix gently but thoroughly to combine.  Taste and adjust with more oil, vinegar or seasoning as necessary.
Lastly add the rocket leaves, give one last gentle toss, and serve.  This is great served immediately while the sausage and tomatoes are still warm, but also equally good after it has been sitting for a couple of hours and the flavours have really infused.  Either way, this should at least be served at room temperature - do not refrigerate.
I hope you enjoy it. 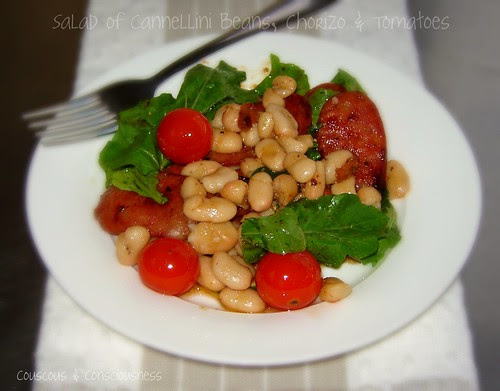 Posted by Couscous & Consciousness at 1:47 AM