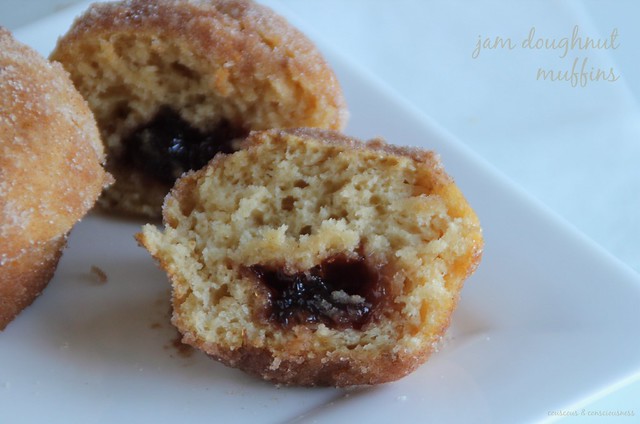 Today is our Secret Recipe Club reveal, which means that I can now tell you the secret that I've been keeping for the last month ... the blog I was assigned this month was Food. Baby. Life.


I've had a month to poke around in Susan's blog, checking out lots of her posts, and getting to know her a little bit from afar.  And, actually as it turns out "afar" is not really that far, since Susan lives "just across the ditch" from me in Australia.


Susan started her blog nearly 5 years ago as a creative outlet during some major life changes, including the loss of her mother to cancer.  Since then she has married and has three wee boys, and what originally started out as a mostly baking blog has developed into a lot of family friendly fare, and a more healthy approach to her baking.


But, in the end, it was Susan's Jam Doughnut Muffins (and I love the fact that she spells doughnuts the same way I do) that stole my heart.  Let's face it, a muffin is great for breakfast, or a snack on the run.  A doughnut is even better ... actually, a whole lot better, but they can be a bit of a faff to make, and you have to wait a good deal longer for satisfaction, and I have to admit that delayed self gratification has never been my strong suit.  On the other hand, something that cooks up quick and easily like a muffin but tastes like a doughnut has got to be the best of both worlds. 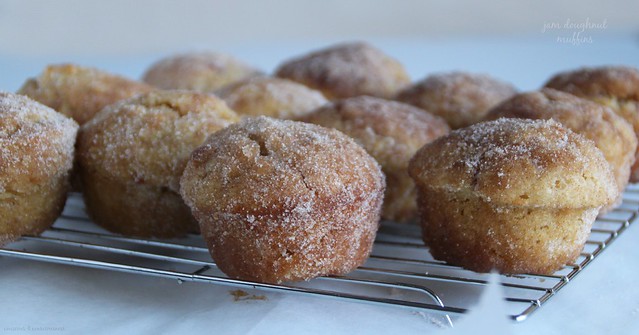 I made a couple of small changes, replacing caster sugar with brown sugar, and melted butter in the muffins with coconut oil.  Coconut oil does solidify at low temperatures, so chances are you might have to dissolve it first - no biggie.  What I did discover though, was that as soon as I added the cold milk, the coconut oil started to solidify a bit - not completely, but a bit.  The upshot of that was that when I added the liquid ingredients to the dry ingredients, there wasn't quite enough liquid, so I added another 1/2 cup of milk.  As it turned out, I don't think this was a bad thing - the combination of the coconut oil and the extra milk delivered a muffin with a beautiful, moist texture and which tasted just as good the second day as they did straight out of the oven, and this my friends, as you probably know, is a rare thing in the muffin world.  (The quantities given in the recipe below are what I actually used.)  I also froze half of the batch, and I can tell you that once thawed they are every bit as good as the fresh ones were.  Only other changes I made ... I didn't have any buttermilk, so I used a combination of regular milk with a bit of natural yoghurt;   and I used homemade plum jam instead of strawberry jam in the middle - really any jam would be great, or even a dollop of nutella if you wanted to go the chocolate route.  Lastly, Susan says the original recipe was for six large muffins, and that is what she made.  She did however recommend making smaller ones, and since I knew that I would want to eat two of these babies in one sitting (no matter what their size), I decided it would be more prudent to make the smaller, regular-sized ones - smaller ones also give you, I think, a better jam to muffin ratio, which makes me smile.


Once the baked muffins are brushed all over with melted butter, then rolled in sugar and cinnamon, they seriously do taste for all the world like a doughnut, and I know for sure that this has become my go-to muffin recipe. 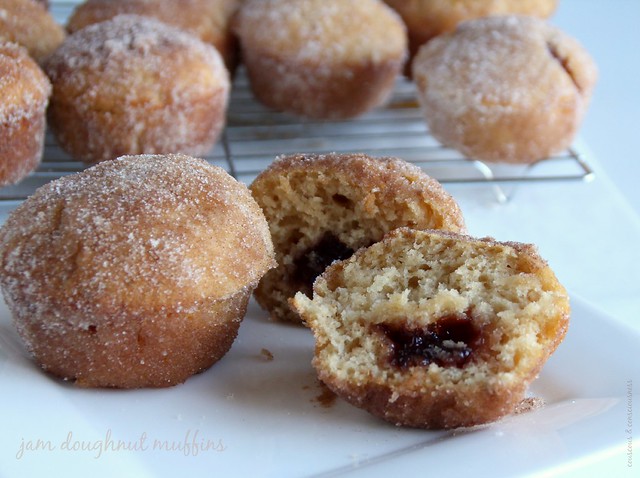 
Sift the flour into a medium-sized bowl.  Add the salt and brown sugar, and stir to combine.


Put a spoonful of mixture into each muffin hole and make an indent in the centre. Fill each indent with a generous dollop of jam.  Top with the remaining muffin mixture and bake in the preheated oven for 20 minutes.


Remove from the oven and set aside to cool slightly.


Meanwhile, melt the butter.  Combine the caster sugar and cinnamon in a large bowl.


As soon as the muffins are just cool enough to handle, brush each muffin all over with the melted butter, then roll in the cinnamon sugar.


Serve while still a little warm (the jam in the middle really holds its heat so watch out!).

An InLinkz Link-up
Posted by Couscous & Consciousness at 4:00 PM