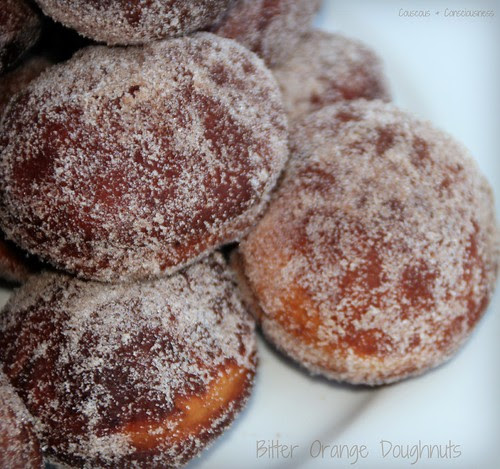 Last night I spent several hours writing a lengthy post, regaling you with my thoughts on festivities such as Christmas and Easter, and some thoughts on the changing seasons.  I even taunted you with mention of the glorious fragrance filling my house as quinces slow roasted away in my oven - something I'll be sharing with you later in the week.  And then the unthinkable happened - as I hit the publish button the whole thing disappeared into the ether never to be seen again.  Toys were thrown out of the cot, unladylike language was used, and I vowed that you were going to have to wait another day to hear about these balls of deliciousness as I was not going to set about trying to recreate my post at 11.00pm.  In fact, I'm not going to even try to recreate it now - I'm going to skip the witty and interesting dialogue and get straight to the subject of the doughnuts.


Making doughnuts is something I've wanted to try for years, but I'd always had the idea that they were too hard.  Still, with time to spare on Good Friday, and wanting to changing things up from the usual hot cross buns, I decided to give them a go. Not that I have anything against hot cross buns, you understand - actually I love them - but it was time for a change and, let's face it, the blogosphere surely didn't need one more post about said HCBs.  And turns out doughnuts were way easier to make than I had imagined.


So doughnuts it was to be, and, since I also wanted to dip into those seldom used cookbooks for this week's entry for Cookbook Sundays, I turned to The Best of Baking by Annette Wolter & Christian Teubner.   This is a book I've had in my collection for over 30 years, and I don't think I've ever used it before.  The book covers baking of every kind - sweet and savory, every day and special occasion, and some real old fashioned favourites.


The original recipe for these doughnuts called for the inclusion of rum in the dough, and a filling of plum jam.  Instead I used some of my homemade "44" liqueur, and filled some of them with my homemade Seville orange marmalade, while I left others plain, dredged in cinnamon sugar as soon as they come out of the pan.  Personally, I loved the "unexpectedness" of biting through the crunchy, sweet exterior, into the soft interior with the bitter-sweet heart.  I can understand though that this might not be everyone's cup of tea, in which case any sweet jam would work well here - I'm planning blackcurrant for my next attempt. 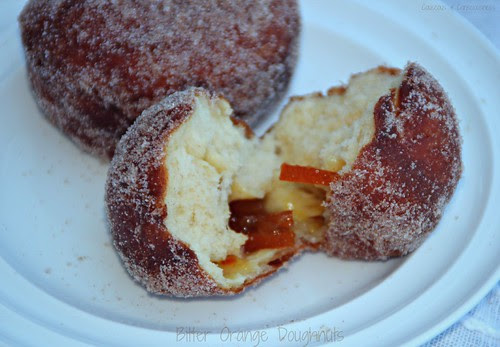 These are undeniably best eaten hot, straight out of the pan, but they kept well for a couple of days, and after a quick zap in the microwave for 25 to 30 seconds they were almost as good as when they were freshly cooked.


Heat milk until just lukewarm - a useful guide is being able to just hold your finger in the liquid without having to withdraw it.  Stir in the sugar to dissolve.  Sprinkle yeast over the surface, and stir in gently.  Cover, and set aside 10-15 minutes until frothy.


Sift flour into a large bowl and make a well in the centre.  Pour the yeast mixture into the flour well, along with the oil, egg yolks, salt and liqueur.  Mix until the flour is incorporated and everything comes together in a light, soft dough.  Place dough ball in a clean bowl, cover and leave to rise for about 20 minutes.


Remove from the bowl, knead very lightly, then roll out to approximately 2.5 cm (1 inch) thickness - dust bench lightly with flour if necessary, but take care not to overdo it.  Cut into 6.5 cm (2-3/4 inch) circles.  If filling with jam - place a scant teaspoon of jam on each circle, and carefully draw the edges of the dough together over the jam filling, pinching the edges together.  Cover and leave to stand for another 15-20 minutes.


Heat the oil in a medium sized saucepan to 180 degrees C (360 degrees F).  Carefully place the risen doughnuts in the hot oil - work in small batches of just two or three at a time.  Cook until golden brown on the underside, then carefully turn over and continue cooking until golden all over - about two to three minutes altogether.


Pour a generous amount of caster sugar onto a dinner plate, and add cinnamon to your taste.  Mix the two together, and spread out.  As soon as the doughnuts are cooked, remove them to a paper towel to drain momentarily, then toss in the cinnamon sugar mixture until coated all over. 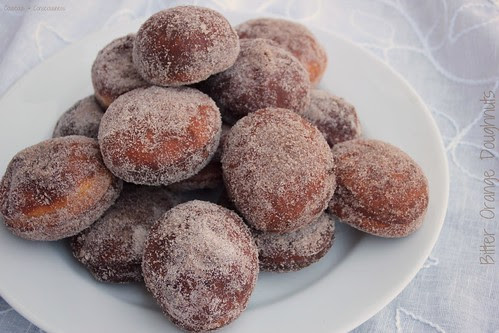 I'm sharing these this week at Cookbook Sundays, where my friends are delving into their cookbook collections and sharing some of their recipes.  Do stop by to see what they're cooking - you might even feel inspired to link up a recipe from one of your own cookbooks.

I am also sharing this post with Sweet New Zealand, a monthly blog event created by the very lovely Alessandra Zecchini, and which this month is hosted by Frances at Bake Club. This is an opportunity for all Kiwi bloggers (whether you are living in New Zealand or overseas), as well as for non-Kiwi bloggers living in New Zealand, to connect and share some of those sweet treats from your kitchen.  So, head on over and share something sweet.  And because, if you care about your hips, these doughnuts should really be shared around, I am also sharing them at See Ya in The Gumbo hosted by my lovely friend Michele at Ms. enPlace, and at Foodie Friday hosted by Designs by Gollam.  Anybody else want a share? 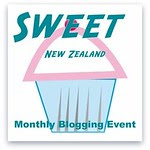 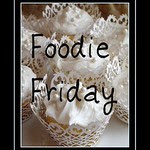 Posted by Couscous & Consciousness at 8:40 PM