I do have a new photo for you this week - unfortunately no mystery since, if you can read Spanish (or actually, to be more precise, Catalan), you will know immediately what it is.  But before I come to that, I thought I would give you a bit of a round-up of all the mystery photos I have shared with you in case you missed any of them.
Photo # 1 - pistachios - photographed on the island of Paros, Greece 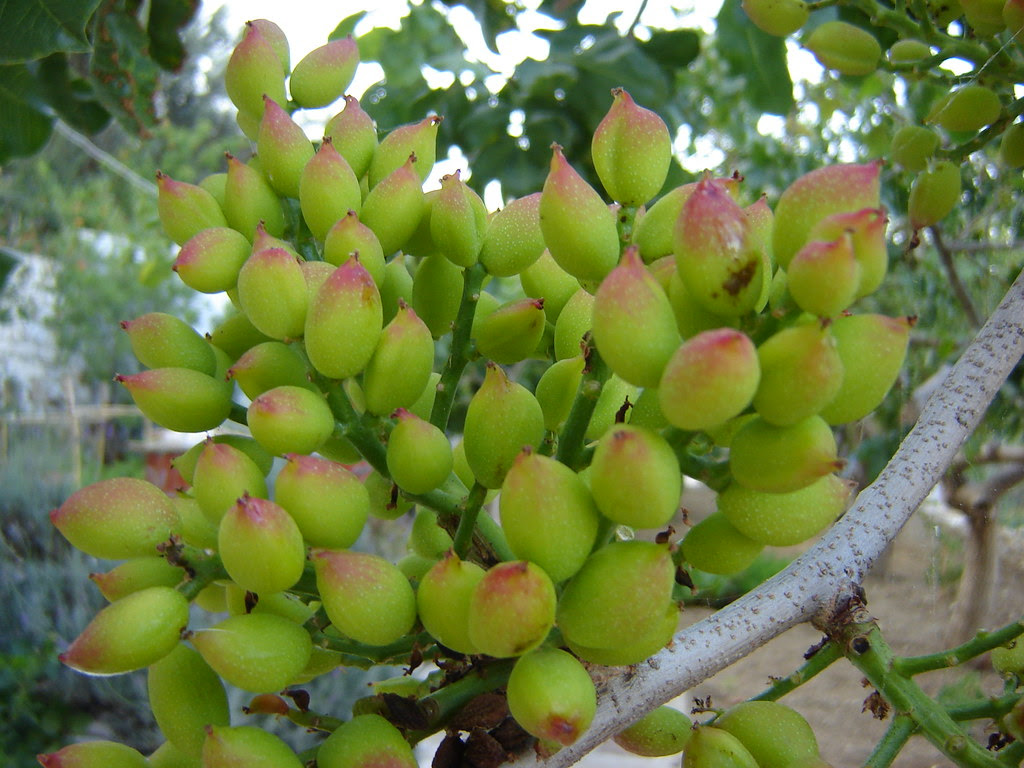 I think this was my favourite photo of them all, and this was the one that stumped all of you.
Photo # 2 - carob - again photographed on Paros 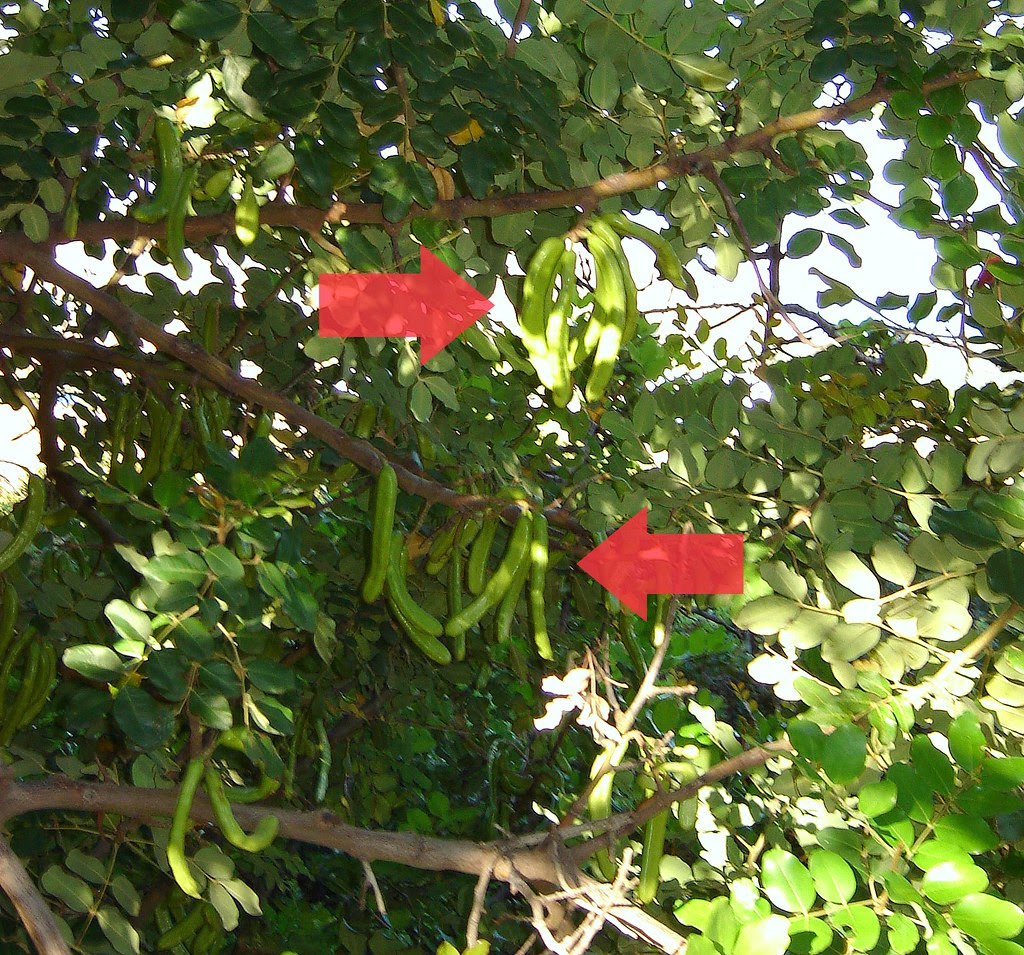 Some good guesses for this one, and Natalia at gatti fili e farina got it right.
Photo # 3 - gooseneck barnacles - photographed at La Boqueria market in Barcelona 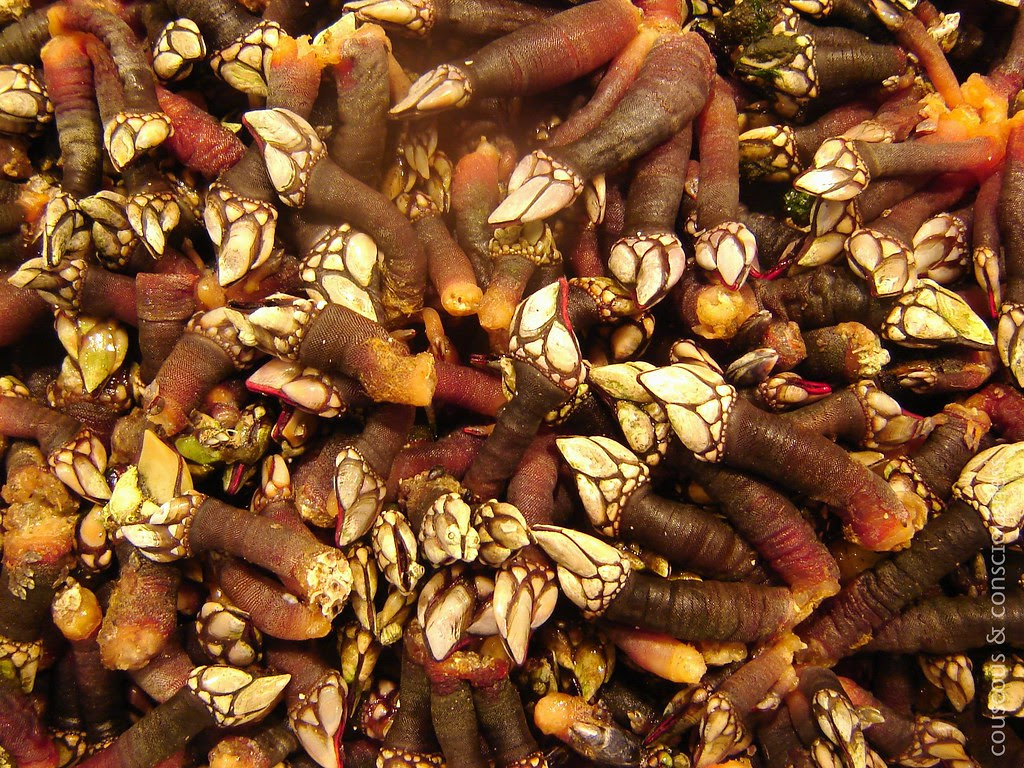 This one really got your interest, and there was all sorts of wild and wonderful guessing going on, with one anonymous reader guessing that they were in fact barnacles.
Photo # 4 - liquorice (or licorice, depending on where you come from) root, again photographed at La Boqueria market 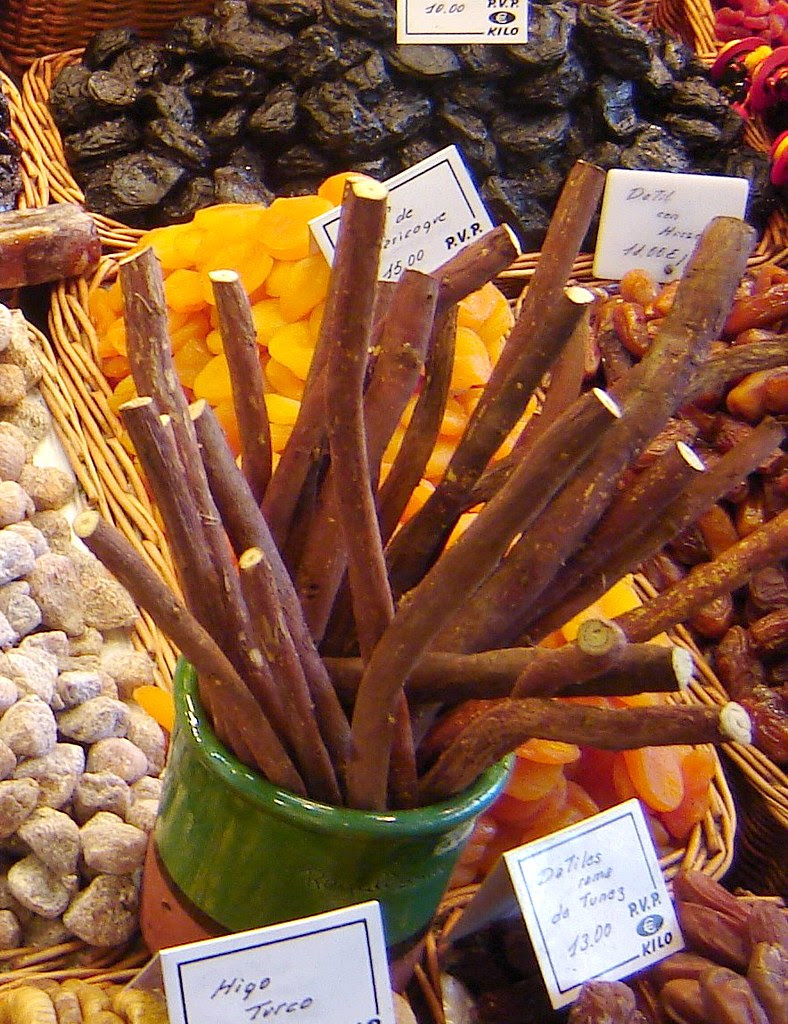 This one attracted lots of very good guesses, with even-star, Elizabeth and Alaskan Dave Down Under all getting it right.
Photo # 5 - razor clams - once again, photographed at La Boqueria market 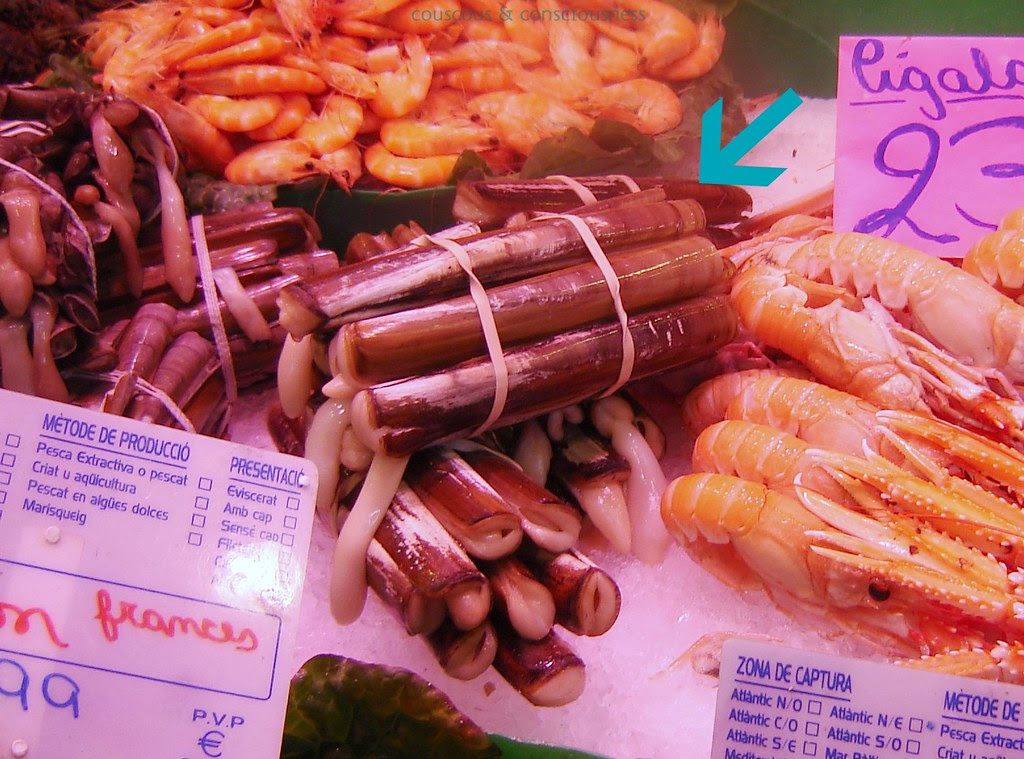 Okay so you guys really know your clams - Natalia at gatti fili e farina, Joi, Heather at girlichef, Natashya at Living in the Kitchen with Puppies, Alex at A Moderate Life, and Rhonda all got this one right.  (Why not go and visit these great bloggers - they obviously know a thing or two about food!)
And now to today's photo.  I guess it won't come as any surprise to you that this was once again photographed at La Boqueria market in Barcelona.  Well, I make no apology for that - after all, you just don't see stuff like this at Peter Timbs Butchery in Edgeware! 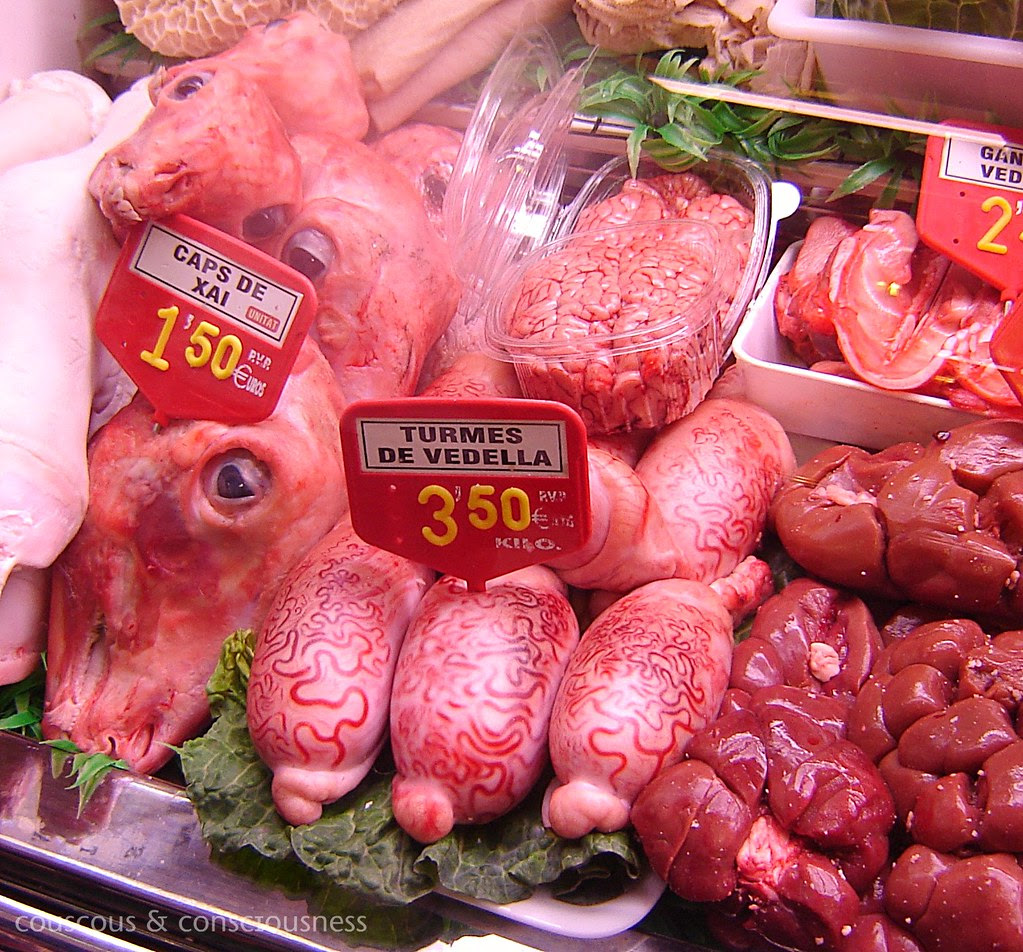 As I said earlier, this is no mystery as such, since things are quite clearly labeled - but the real mystery to my is why on earth anyone would want to eat some of this.  Personally, I quite like a bit of offal (that is, liver and kidneys), and I get that it is truly honouring the animal which has given its life for your sustenance by eating every part of it, but I'm not ashamed to admit that there are just some things that I'm just a bit squeamish about.  In this photo are:  lambs' heads (on the left), bulls' testicles (centre front), bulls' gullets (on the right, directly behind the kidneys).  This vendor also usually has bulls' penises, but they were all out on the afternoon I was there (no doubt they're so popular they sell out of those by lunch time)!
I would love to know - which was your favourite photo in the series, and what food or animal body parts make you feel squeamish?
I really enjoyed bringing you all these photos, and I am immensely heartened by the interest that you all showed in this series.  Although some of these items are somewhat more exotic (and not necessarily available everywhere), it was a very salient reminder to me of how far removed from the source of our food we can become when we buy packaged ingredients at the supermarket.
I care passionately about eating food which, as much as possible, is made from scratch from natural ingredients;  food which is made slowly, with passion and with love;  food which is fresh and seasonal;  food which is prepared simply and not messed about with;  food made from ingredients you know, understand and can identify - not ingredients which have sesquipedalian (I sooo love that word) names you can't pronounce - really, who wants to eat calcium disodium ethylenediamintetraacetate (yummo!)?  That said, I'm not super woman - I don't have the time to spend in the kitchen that my grandmother may have done, so keeping it real means that I do take some shortcuts in the kitchen.  Whilst I like to make my own pasta on occasion, most of the time I buy store-bought, dried pasta.  Likewise bread - yes I do make my own sometimes, but mostly I buy a good artisan loaf from a local baker.  I like making my own jam, but can't be bothered too much with preserving so I use tinned tomatoes instead of bottling my own.  I often fall back on a jar of curry paste or tin of cannellini beans.  And I eat more than my fair share of ice cream and chocolate - both of which are health foods as far as I'm concerned.
A place where you'll find many like-minded souls, wonderful people who all share a similar food philosophy is the Hearth and Soul group.  Previously, known as the Two for Tuesdays blog hop, the group has had a name change and refocus of definition to better reflect what food means to its contributors. Why not hop over and see what it's all about.  I am contributing this post to the group, and you can see all of this week's contributions here.
Posted by Couscous & Consciousness at 2:15 PM