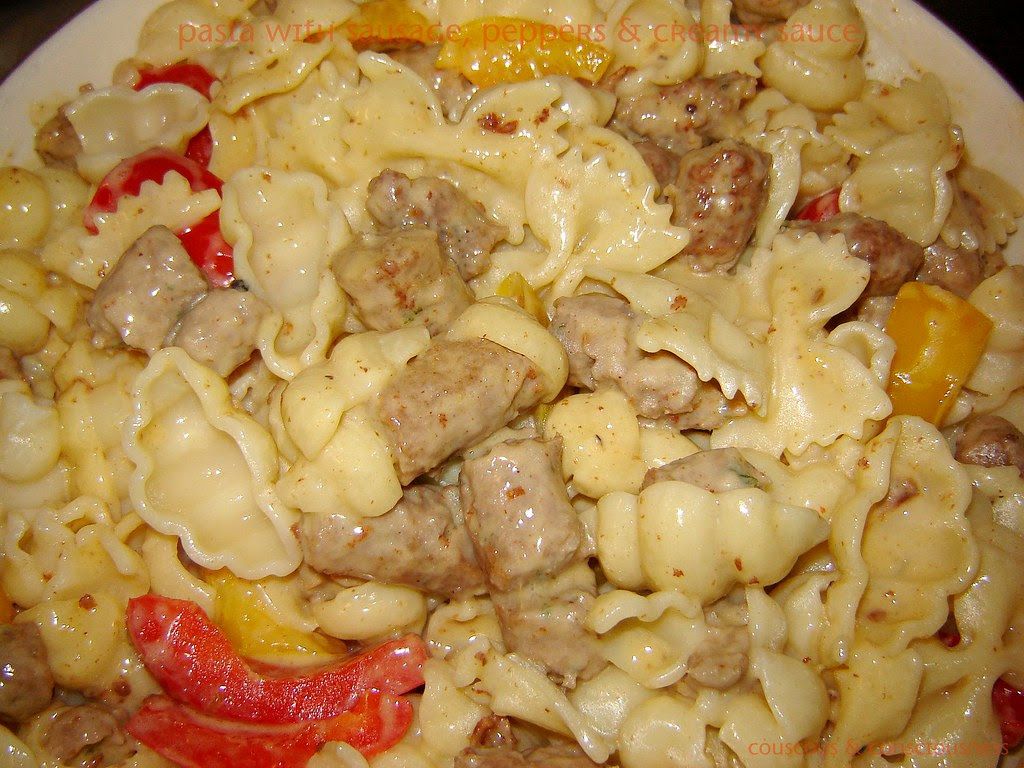 You already know that I love pasta, and big bowls of rustic, flavourful, family-style meals, but I don't think I've mentioned here before that I have a big weakness for sausages.  Whilst, as I've told you in previous posts, I like to keep my intake of meat fairly minimal, I can't imagine ever leaving sausages out of my diet.
One of our assignments back in February (okay, so I'm slow) for the Cooking Italy group was Marcella Hazan's Pasta with Sausages and Cream Sauce from Essentials of Classic Italian Cooking

.  I really liked the idea of this dish, but I also knew (despite the fact that others in the group had tried it and loved it) that I was going to have to make some changes to Marcella's original version in order to satisfy our palettes.
The original recipe called for "sweet sausage, containing no fennel seed, chilli pepper, or other strong seasonings".  Well, that definitely was not going to cut it for me - so rule one broken, and I used these Sicilian-style sausages from Peter Timbs Butchery - they were slightly spicy (not excessively so), contained fennel seeds, and were in my opinion just what I was looking for in this dish. 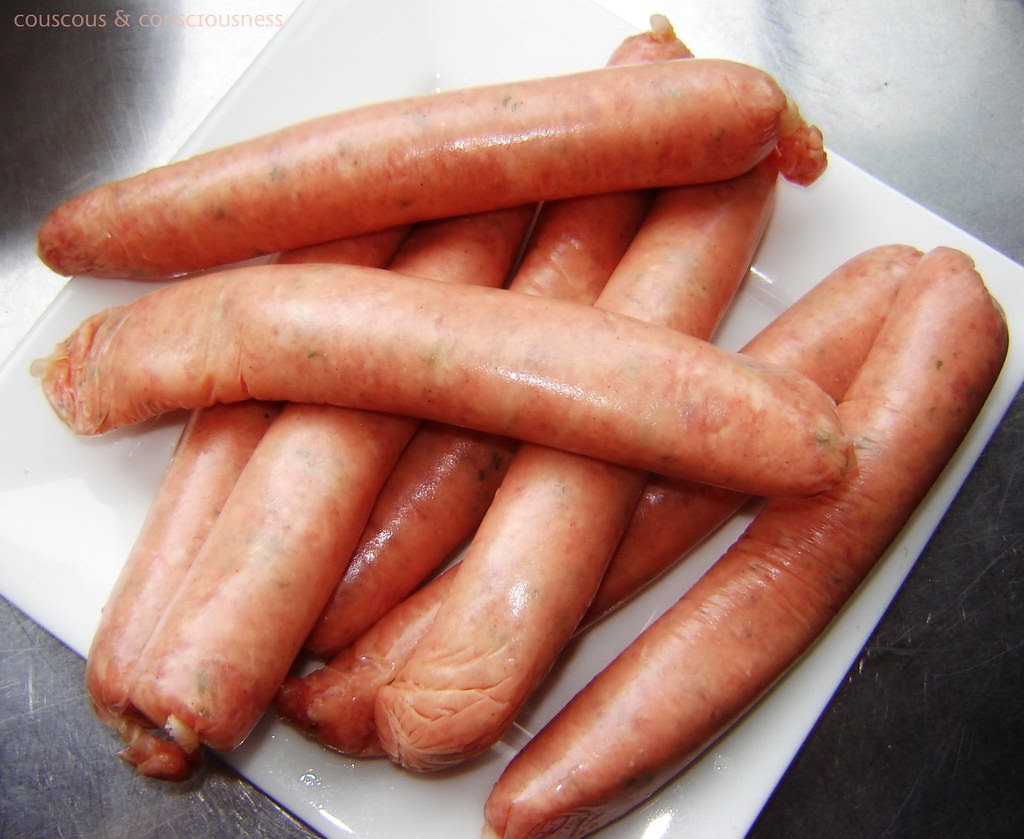 The second change I made was leaving out the onion that the recipe called for, since we pretty much don't do onion around here.  Instead I chose to add some red and yellow peppers.  I loved the texture and colour that these brought to the dish, and I thought that the sweetness of the peppers was a nice foil to the spiciness of the sausages. 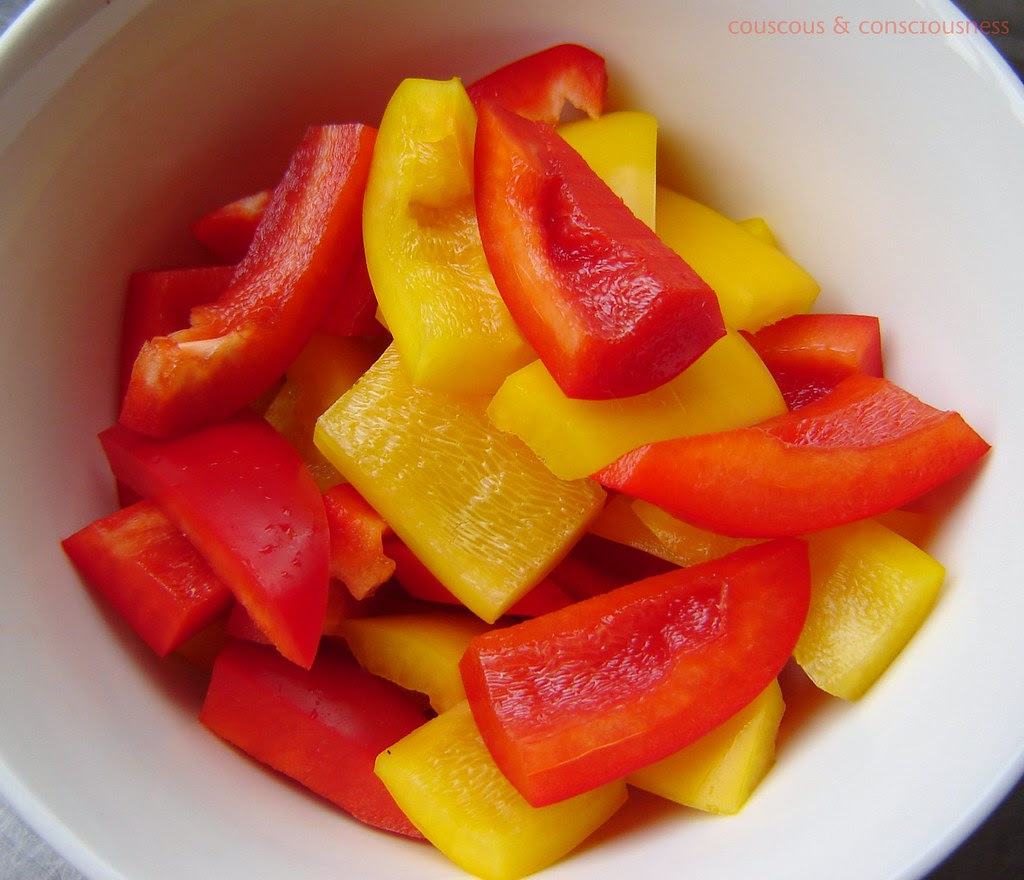 Then, instead of using regular pouring cream, I used some creme fraiche.  I love the "lemony" tang that this adds, and also creme fraiche is such a forgiving ingredient to use - it doesn't take any thickening and never splits or curdles.  Because, I'd used the creme fraiche I left out the parmesan cheese that was called for - I just didn't feel it needed it.
I will definitely make this again, since it went down pretty well here.  It makes a great family style meal, and was perfect for a coolish evening.  Was I happy with the changes I made?  Yes, absolutely.  Would I make any other changes?  If I'd had some on hand I would definitely have added some chopped, flat-leaf parsley at the end, and I think next time I would add a sprinkling of chilli flakes as well to give it a bit more "pep".
If you would like the original recipe, you can find it here on Angela's blog (Spinach Tiger), or read on for my version.
Pasta with Sausage & Peppers in Cream Sauce Recipe
Inspired by Marcella Hazan's
Essentials of Classic Italian Cooking

Click here for printable copy of this recipe
Serves 4
500-600g sausages of your choice
1 red pepper
1 yellow pepper
olive oil
250g creme fraiche
400g pasta shapes
(I used farfalle & gnocchi-shaped pasta)
flaky sea salt
freshly ground black pepper
Set a large pan of water over high heat and bring to the boil.  Once it has come to a boil, salt liberally, add the pasta to the pan, and cook until al dente.
Meanwhile, remove the casings from the sausages - just run a sharp knife down the full length of the sausage, peel off the casing and discard - it will come off very easily.
Core and de-seed the peppers, and cut into pieces - roughly about 2cm squares.
Heat a tablespoon or two of olive oil in a large skillet, set over high heat.  Add the sausages to the hot oil and using a wooden spatula break the sausages up into smallish pieces (about the same kind of size as the pieces of pepper). 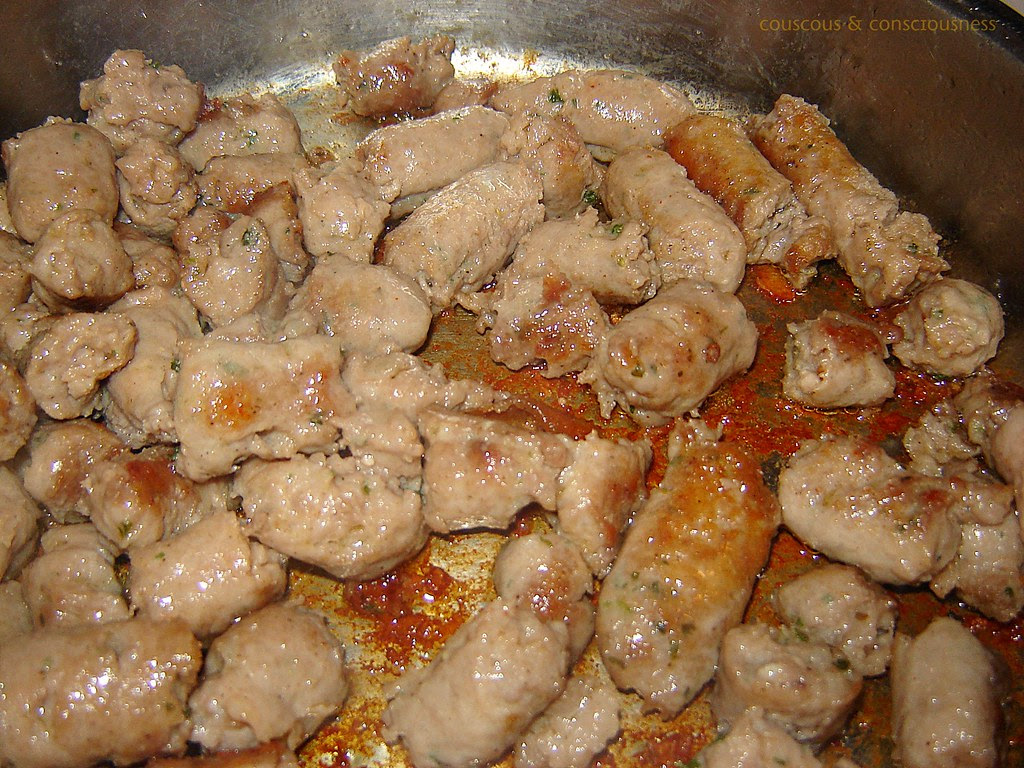 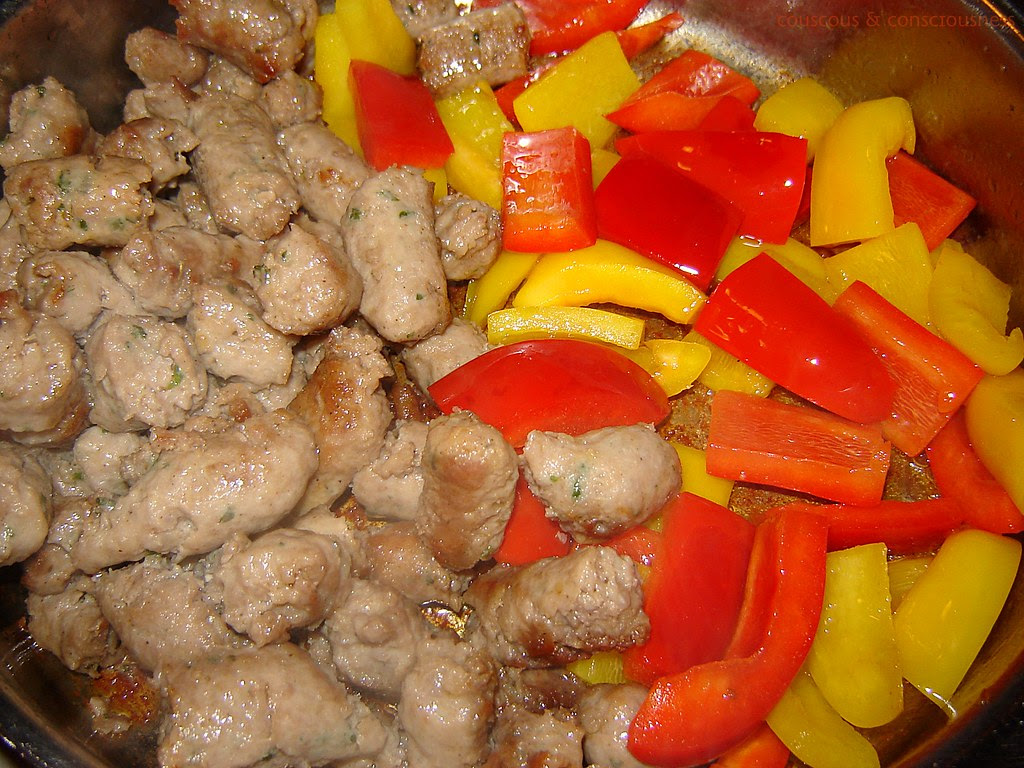 Add creme fraiche to the pan, and stir until the creme fraiche has completely dissolved and warmed through, scraping up all the brown bits from the bottom of the pan.  Taste for seasoning and adjust as necessary. 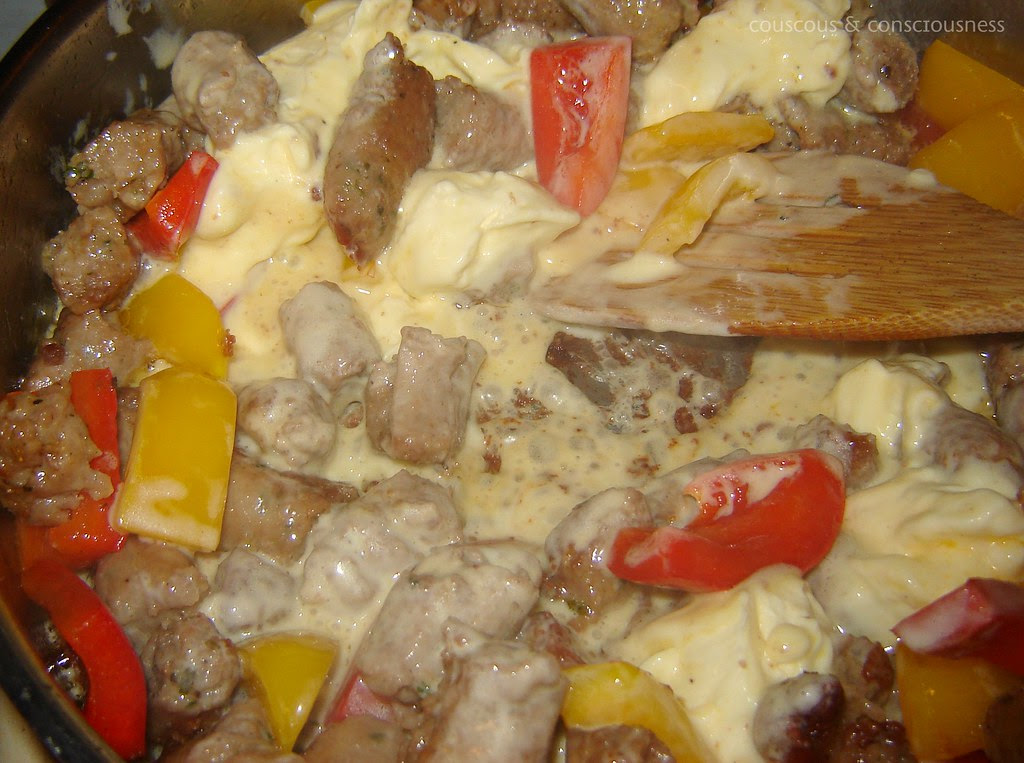 Set aside about a cup of the pasta water, then drain pasta and add to the sauce.  Toss pasta through the sauce until completely coated, adding a little of the reserved pasta water if necessary.
Serve, family style in a large bowl or platter, sprinkling some freshly chopped flat-leaf parsley over the top if desired.

, Book Depository UK, and Fishpond NZ
Do visit my Cooking Italy page to learn more about the group (maybe you'd even like to join in - you don't have to have a blog to join the group and cook along with everyone else), find links to other members of the group, and links to all the Cooking Italy recipes I've cooked so far.
I'm submitting this post to Hearth and Soul blog hop - do visit and have a look at some great food submitted by wonderful people who really do cook from the heart.
Posted by Couscous & Consciousness at 7:37 PM