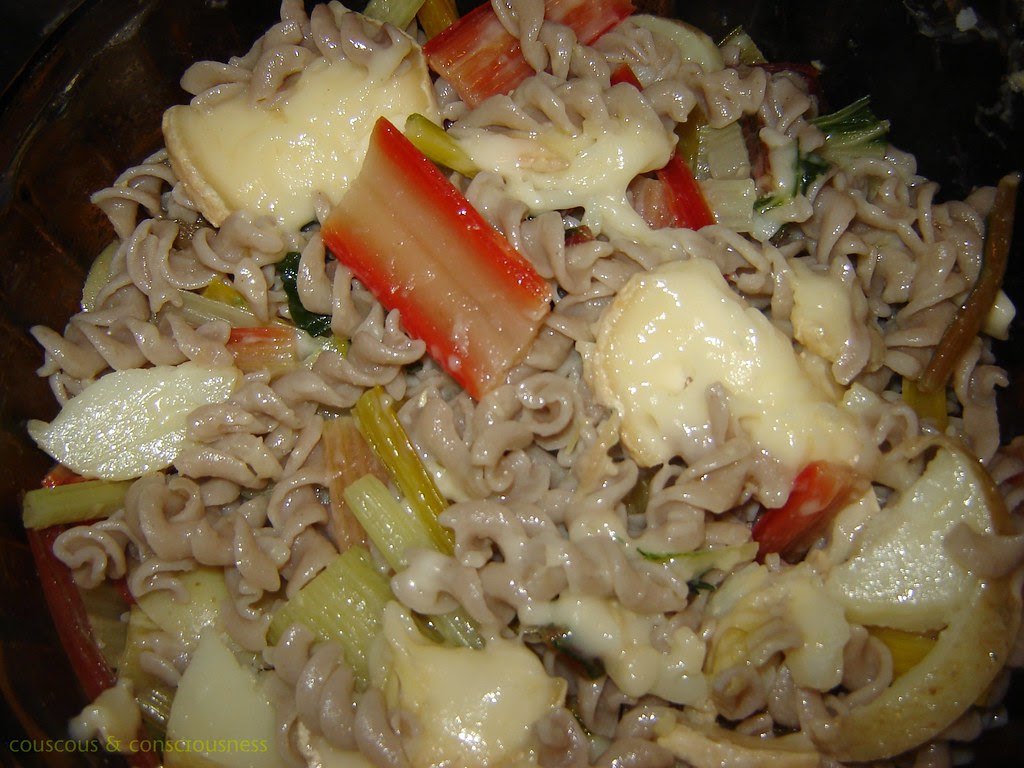 This was another assignment for the Cooking Italy group, a food blogging group learning to cook regional Italian food via Marcella Hazan's Essentials of Classic Italian Cooking

.  Visit my Cooking Italy page to learn more about the group, visit other members and see what they are cooking, and see what's coming up on the next month's schedule.
Now back to this assignment ... to be honest I really didn't think that I would like this dish very much.  As a result, thinking that I probably wouldn't get around to blogging about it, I didn't put too much effort into its presentation and so I don't think this photo really does it justice.
What a happy surprise.  This tastes good!  It is lighter than you might expect - as I am so often finding with so many of Marcella's recipes.  There is plenty of flavour, but the flavours are subtle and well-balanced, rather than bold, "hit-you-over-the-head" flavour - something else which seems to be characteristically Marcella.  The buckwheat pasta was very much better than I expected it to be - I don't know why I really thought it wouldn't be, since I adore soba noodles which are basically the same thing (just a different shape).  The rainbow chard brings an earthiness to the dish which is rather comforting, and the combination of chard, potato, pasta and cheese makes for a dish with great texture.
So perhaps I should tell you a little more about this dish.  Pizzoccheri are a specialty of the Valtellina, a valley in the northern Italian region of Lombardy.  This is an alpine area, close to the border with Switzerland.  Buckwheat grows well in this area, and buckwheat flour is formed into short, flat, broad noodles to make pizzoccheri.  Our assignment did actually call for making our own noodles, but making buckwheat pasta can be a little bit tricky, particularly if you're not used to working with buckwheat flour.  Now I have made my own pasta a few times, but not often, and as I didn't have a lot of spare time to play around and experiment I chose to opt for a store-bought pasta.
Unfortunately, I couldn't get any buckwheat pasta in the traditional shape - they should look like these ones that Angela made - so I had to settle for buckwheat fusilli, but the dish was really none the worse for it.  I'm not going to give you the recipe for the pasta here, since I didn't make it, but you can find it on page 231-232 of Marcella's book or follow Angela's instructions.
The pizzoccheri are cooked with potatoes and Swiss chard (I used rainbow);  then everything is tossed with a herb (the recipes calls for sage, but I used fresh thyme since that's what I had on hand) and garlic infused butter, cheese and briefly baked in the oven.  Particularly if you are using a store-bought pasta, this is super quick and easy to put together (not much more than 20 minutes from start to finish), and very delicious.  I urge you to try it. 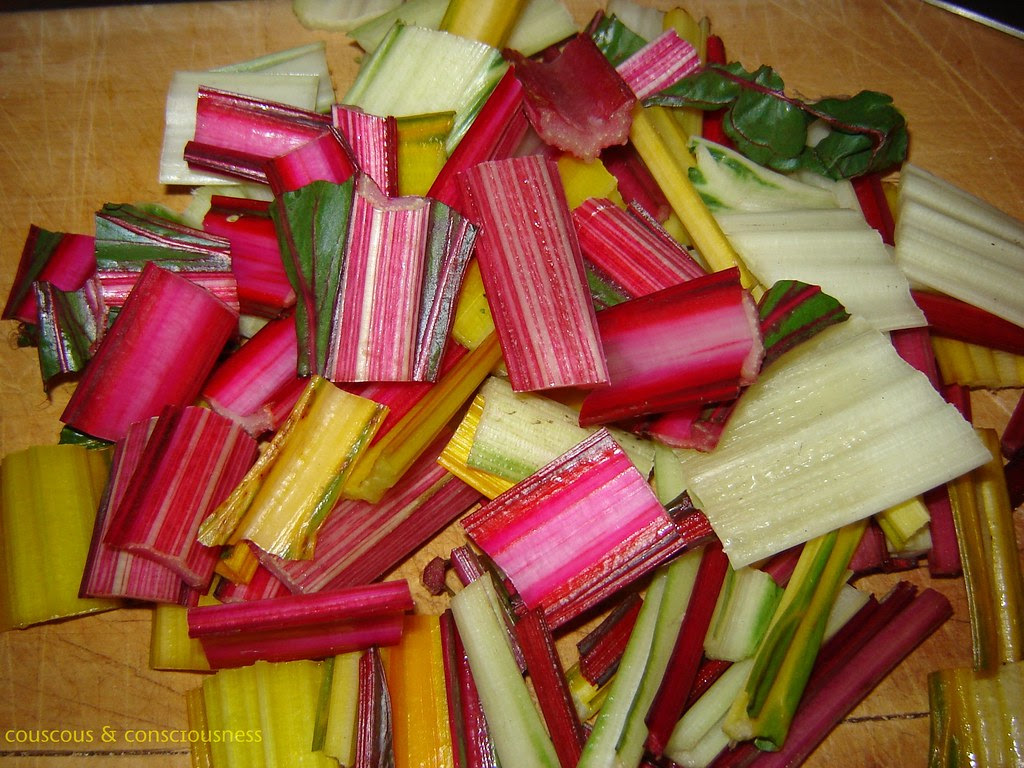 Vegetarian, gluten free
Makes 2 generous servings
Click here for a printable copy of this recipe
250g buckwheat pasta
3 cups Swiss chard stalks only
(cut into pieces about 3cm long)
2 medium new potatoes
(sliced about .5cm thick)
4 tablespoons butter
4 cloves garlic
3 fresh sage leaves or small bunch thyme
125g fontina or taleggio cheese, thinly sliced
2/3 cup parmesan, freshly grated
Begin by preheating the oven to 200 degrees C,  grease an ovenproof baking dish, and bring a large pot of water to the boil.
Meanwhile, wash the chard stalks and cut into short lengths, about 3cm long - or similar length to the pasta shapes that you are using.  Slice the potatoes about .5cm thick, or you could cut them into small cubes if you prefer - I didn't bother to peel mine as they were new and quite thin skinned, but if yours are older and thicker skinned then I suggest that you peel them first.
Once the water is boiling, salt it liberally.  Now the idea here is that the chard, potatoes and pasta should all be cooked together, so you need to work out your timings according to the pasta you are using.  If you are using freshly made pasta it will take just seconds;  if your pasta is dried then have a look at the recommended cooking time on the packet - these times are not an accident, I find that they are generally a pretty reliable guide to the length of cooking time required to achieve al dente pasta.  Once you've established the cooking time for your pasta, take a minute or two off that time - you want your pasta to be slightly underdone as it is going to be finished in the oven - and then work your cooking times back from there.  The recommended cooking time for my pasta was 10 minutes, so what I did was this:
Drop the chard into the boiling salted water and boil for 10 minutes.  After 10 minutes add the potatoes, then 2 minutes later add the pasta, and continue cooking for a further 8 minutes.  At this stage both the chard and the potatoes were just tender and the pasta was not quite done.  Perfect.  If you are not totally sure about your timing, just cook the pasta separately so that you can be sure not to overcook it - simply cook the chard and potatoes till tender, remove from the water, then cook the pasta in the same water.
In the meantime, give the garlic cloves a bit of a bash to break them up a bit, but don't bother crushing or chopping them, and don't even bother taking the skins off - you just want to break them enough for them to open up and release flavour.  Put the butter and garlic into a small pan, and put over medium heat.  Allow the butter to melt  and keep turning the garlic over in the butter until it turns golden brown, then remove and discard.  Add the herbs to the pan, move them around a bit in the garlicky butter, and then take off the heat.
Once the vegetables and pasta are ready, drain them and tip everything into the greased baking dish.  Pour the herby garlicky butter over everything and toss everything together well.  Add the sliced fontina or taleggio and half the parmesan and stir through the pasta and vegetables.  Sprinkle the rest of the parmesan over the top.
Bake on the top shelf of the oven for 5 minutes, then remove and allow to stand for a further few minutes before serving with extra grated parmesan.

Posted by Couscous & Consciousness at 2:46 PM