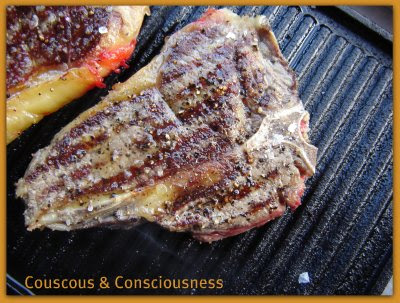 As I may have mentioned here before, I am not much of a meat eater, especially red meat.  It's not that I am particularly opposed to eating meat - I think the whole issue of eating ethically, responsibly and healthily is so much bigger than just whether we should eat animals or not - it is just that there are a whole lot of other things (especially vegetables) that I like more.  The last time I ate a steak I think was probably close to a couple of years ago;  however this was an assignment for the Cooking Italy group (a group dedicated to learning to cook Italian food through the recipes of Marcella Hazan from Essentials of Classic Italian Cooking

), so in the interests of group participation I thought I would give it a go.
Now, were I preparing this in "true" Florentine style the T-bone steaks would come from Chianina cattle - the largest, and one of the oldest breeds of cattle existing today.

Photo source
Of course, here in New Zealand, Chianina cattle are fairly thin on the ground, but I still managed to pick up some passable looking T-bones - a bit thinner than the 1.5 inches thick that Marcella's instructions called for, so I knew I would have to adjust the cooking time accordingly. 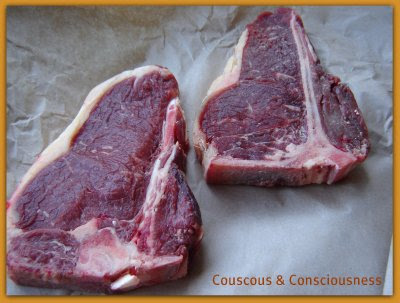 Now I have to say that I was a little nervous about Marcella's method, as the meat is cooked completely without oil - no oil either on the meat or cooking surface, but then a little olive oil is drizzled over the meat after it is cooked.  I would normally rub some olive oil into the meat before then applying it to a dry pan.  However, Marcella recommends against this - suggesting that in doing so the oil can scorch and impart an unpleasant taste to the meat.  So, as I said, I was somewhat nervous about that - intuition suggested to me that dry meat and dry pan, I was going to end up with a dry finished steak!  I worried for nothing - the end result was a juicy, succulent steak, with absolutely no splattering or smoke.  I would definitely cook a steak this way again - it might be another two years before that happens mind you!
For two people you will need 1 to 2 T-bone steaks (depending on size).  If the ones you come across are like mine, you will definitely need one per person;  on the other hand if you can get a genuine Chianina T-bone one steak between two people will be plenty.  You will also need coarsely ground black peppercorns, flaky sea salt, a clove of garlic (lightly crushed), and some extra virgin oil.
Heat a cast iron grill pan till very hot ( I let mine heat for at least 10 minutes).  Meanwhile, rub the coarsely ground black peppercorns into the meat on both sides.
Grill the steak according to your preferred degree of doneness, which of course will also depend on the thickness of your steaks.  I like mine rare, and my steaks were about 1.5-2cm thick, so I grilled mine for about 3 minutes on each side.
After cooking the first side, turn it over and sprinkle salt on the side you have just cooked.  Then when the other side is cooked, turn it over and sprinkle salt on that side.  Then while it is still on the grill, rub the slightly crushed clove of garlic over the bone, drizzle with a hint of olive oil, flip it over and quickly do the same on the other side.  Then remove to a serving plate and allow to rest for a few minutes before serving. 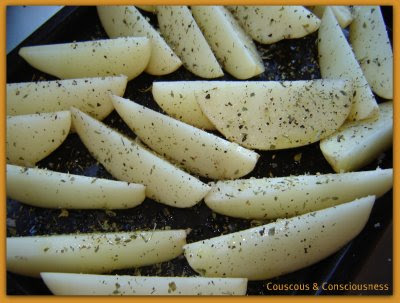 I served this with some oven baked potato wedges, simply drizzled with olive oil and sprinkled with flaky sea salt and dried oregano (fresh rosemary would be even better, but use what you have), then baked at about 200 degrees C until brown and crispy (about 45 minutes). 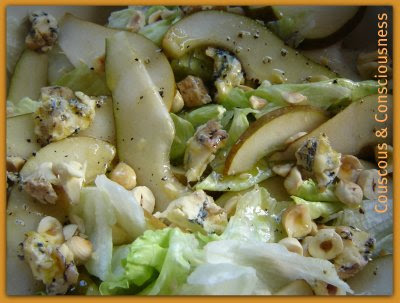 I also served a crisp salad of iceburg lettuce (not normally my lettuce of choice, but seemed like just the thing to go with a steak), pears, blue cheese and toasted hazelnuts with a lemon vinaigrette.
So, despite my reticence about eating a steak, and about the cooking of it, all things considered, I thoroughly enjoyed this meal and would certainly make it again - sometime.
Posted by Couscous & Consciousness at 10:21 PM