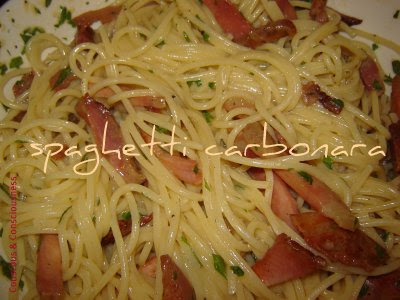 ), and one I was very eager to complete.  After all, spaghetti is one of my favourite foods (surely it should be a food group in its own right), and so is bacon - I may not be much of a meat eater, but I go completely weak for bacon.  Put the two of them together and ... what can I say ... normally anything that good is illegal!
The story goes that towards the end of World War II, American soldiers stationed in Rome would take eggs and bacon to the local families, with whom they had made friends, and ask them to make pasta sauce from the produce.  Whether or not that is true, this dish is considered to be a Roman classic.
I've made a few Carbonara sauces over the years, from a variety of sources, many of which have probably been somewhat dubious in their authenticity.  Most of the recipes I've used in the past have included cream, which does not appear in this recipe, and none have included wine which Marcella does include in hers.  I really liked both of these variations - the absence of cream definitely produced a much lighter version than I have been used to, and the inclusion of the wine (I did tweak that a little mind you - read on) added some depth and complexity (and a certain brightness) to the flavour that I found really pleasing;  it also cuts through the richness of the eggs.  I actually didn't have a bottle of wine open, so I substituted 1/4 cup of vermouth to which I added about 1 tablespoon of lemon juice - I often do this when I'm making risotto if I don't have a suitable bottle of wine open.
Marcella's original recipe claims to serve 6.  I used the same quantity of sauce ingredients to feed two people, with 1/3rd of the pasta.  That said, bear in mind, that Italian people generally (as I understand it) would not use as much sauce with their pasta as I usually tend to do - the idea I believe is that the sauce should just coat the pasta, rather like a dressing on a salad.  I think also that at the Italian table a pasta dish would generally be served as an appetiser, or part of a multi-course meal, whereas in our house the pasta dish is usually the main meal itself, so I like to serve rather more sauce than might be traditional.  In summary, I think the quantities I've given here could probably stretch to serve 4 (I'm really not sure that it would serve 6, unless it really was an appetiser), and you should allow about 125g pasta per person.
Without a doubt, this will become a regular stand-by in our house.
Spaghetti with Carbonara Sauce Recipe
Adapted from Marcella Hazan's
Essentials of Classic Italian Cooking 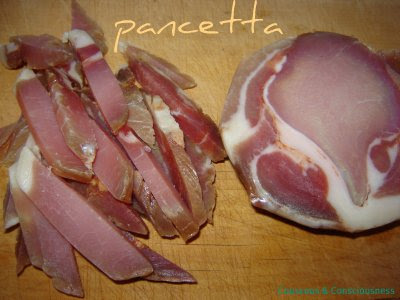 Remove skin from garlic, and then crush slightly - just enough to "open" the garlic clove up a bit, without completely disintegrating it.  Put the garlic, together with the olive oil, into a cold skillet over a medium high heat.  Once the garlic becomes a deep golden colour remove it and discard it.
Add the strips of pancetta or bacon to the pan.  Once it has become crisp and browned, add the wine to the pan and allow it to bubble away for a couple of minutes, then remove pan from the heat.
Break the eggs into the bowl in which you plan to serve your completed pasta dish.  Whisk them lightly, add the pecorino and parmesan cheeses, the chopped parsley, and lots of freshly ground black pepper,  Combine everything well.
Drain the spaghetti, and add to the egg mixture in the bowl, and toss rapidly until all the spaghetti is coated well with the mixture.
Briefly return the pancetta to a high heat to warm through, and then empty the pancetta (together with any oil and rendered bacon fat in the pan) into the pasta bowl, toss well, and serve immediately.
We enjoyed this with nothing more than a simple green salad and some crusty bread.
Posted by Couscous & Consciousness at 10:58 AM