Tapas - so much more than a Spanish bar snack

Students, particularly new ones, are often curious about the name of our yoga school - Yoga Tapas. For most people the term "tapas" immediately conjures up thoughts of small dishes of Spanish food, and they generally want to know what this has to do with yoga - "does it mean that you just do little bits of yoga?" I am often asked. The more hopeful ones, I imagine, are thinking that supper will be laid on after class! Big disappointment for them no doubt.
In yogic terms, however, tapas is something altogether different. The word comes from the Sanskrit root word "tap", meaning to heat, burn, purify. Whilst that may well imply "cooking something up", in case you are still think this has something to do with food, let's examine the concept in the context of our yoga practice and our daily lives.
A foundational text of yoga, considered by many to be of principal importance, is The Yoga Sutras of Patanjali. There is some uncertainty as to exactly when these were written, but scholars generally attribute the time of composition to somewhere between 200BC and 500AD - certainly puts paid to the idea that yoga is a bit of a modern day "fad", doesn't it. The text prescribes adherance to an "eight limb path", in order to quiet the mind and thereby achieve true consciousness.
Most of us are already familiar with the third limb - that of asana, or the physical practice of various postures. Many of you will be less familiar with the first two limbs, however - the yama and niyama, which are the ethical principles and personal disciplines which a yoga practitioner endeavours to follow. There are five of each of these, with tapas being the third niyama. This is often translated as commitment, dedication, or discipline.
In Hinduism, figuratively speaking, the term denotes spiritual suffering or austerity. Practices of mortification of the flesh are also considered forms of tapas. Examples of such practices are found in many religions, and can range from simple abstention from excessive indulgences (food, sex, alcohol) to self-inflicted pain or physical harm (whipping, piercing, genital mutilation, beating, etc). To Hindus, spiritual enlightenment is considered the highest goal in life, and it is generally believed that one must go through many reincarnations to achieve this. Sadhus, however, believe they can "short-cut" the road to salvation by renouncing earthly pleasures, and burning off bad karma by putting their bodies through extreme physical hardship.
One such example is that of the Standing Baba or Khareshwari who have taken a vow to remain standing - some sources suggest for a period of 12 years, others suggest "forever". Whilst they may walk about, the vow of the Khareshwari prohibits them from sitting or lying down, not even for eating, sleeping or going to the toilet. They do, however, have a swing-like contraption which supports the torso during sleep, and which during the day enables them to rest the arms. A sling underneath the swing, enables the Standing Baba to rest one leg at a time. 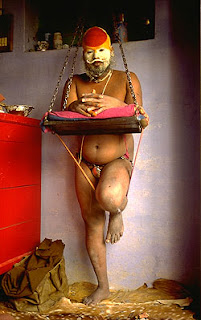 Bajrang Das, a Standing Baba, who never sits down, day and night.
He sleeps standing too, hanging over his swing. A metal chastity belt covers his genitals.
Photo Source

In his book, Shantaram, Gregory David Roberts describes a visit to a hashish den operated by a group of Standing Baba. He gives a vivid account of the extraordinary pain and disfigurement that he witnessed, observing that for the first five to ten years of practising this austerity the Standing Babas endured huge, bloated legs, often severely ulcerated, before the legs eventually wither away to just bone in the ensuing years. He speaks of terrible pain experienced with every downward pressure of the feet, causing them to sway constantly from one foot to another. In conclusion he says: "The faces of the Babas were radiant with their excruciation. Sooner or later, in the torment of endlessly ascending pain, every man of them assumed a luminous transcendent beatitude. Light, made from the agony they suffered, streamed from their eyes, and I've never known a human source more brilliant than their tortured smiles."
So, the next time you think you're suffering after 30 seconds in a standing posture, spare a thought for these guys!
Most of us, however, are not living the life of an ascetic or intending the observance of painful austeries. For us, tapas refers to a "burning effort under all circumstances to achieve a definite goal ..." (BKS Iyengar, Light on Yoga). We can of course think of this in terms of practising with determination and focus, striving to burn up impurities in the body and to achieve perfection in this posture or that. However, if you begin to think of tapas as simply exercising the dedication and commitment to: get on the yoga mat every day, without expectation of any particular result; or to sit for meditation every day, even when you don't feel like it; or simply to exercise the love and patience to remind your child for the umpteenth time not to run through the house with muddy boots on. "If you think of tapas in this vein, it becomes a more subtle but more constant practice, a practice concerned with the quality of life and relationships rather than focused on whether you can grit your teeth through another few seconds in a difficult asana." (Judith Lasater, Yoga Journal)
In his book, Meditations from the Mat, Rolf Gates offers a refelection on tapas that really resonates with me. As I could not possibly paraphrase this any better, I quote: "The word that most of us use to describe this energy is 'dedication'. This is not the dedication of steely self-control, it's the dedication of the human heart that yearns for beauty. It is our own capacity for love that underlies our ability to practice with burning zeal, year after year. Again and again students say they come to yoga to work on their flexibility, or to tone their abs, buns, and thighs, but that something else has kept them coming back. Something else has blossomed in their hearts. Yoga opens the door to the life that we have yearned to live. It is this yearning, this gladness, that carries us back onto our mats day after day. Tapas is our opportunity to witness the power of love in our everyday lives. As you approach your next practice, note the force that brings you to the mat. See if you can discern, under the clamor of desire and aversion, the still, pure voice that yearns for beauty."
Posted by Couscous & Consciousness at 2:48 PM