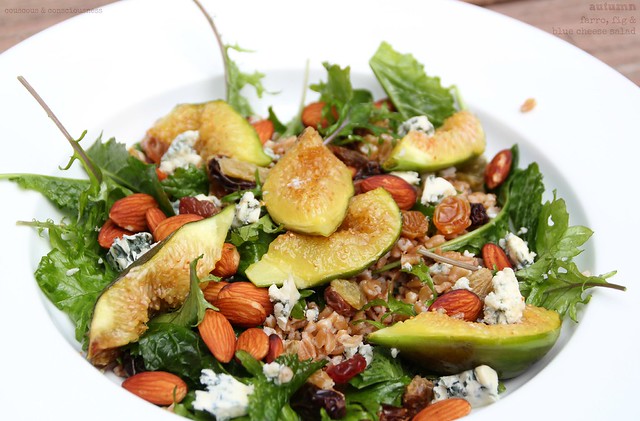 Over the last few weeks, I've missed out on a bit of our culinary journey with Diana Henry over at I Heart Cooking Clubs, but I felt I couldn't miss the opportunity to join in this week as we bid our fond farewells to Diana.  She is definitely an inspirational cook and I have loved cooking from her culinary tomes in which I have invested - A Change of Appetite and Salt Sugar Smoke.  I love a cookbook which is as much a joy to sit down and read as it is to cook from, and I have certainly found that in both of these volumes.  Sitting down with one of Diana's cookbooks to have a read and find a little dinner inspiration is like sitting down with a good friend, and I know that I will continue to enjoy her company in my kitchen.


Right now my neighbour's fig tree is literally groaning under the weight of its ripening crop, and it's a constant vigil to get to the fruit at just the right time before the birds do.  Must be the spectacular summer that we've had in my part of the world this year, but the fruit seems to be bigger, fatter, sweeter and juicier than ever before, and I knew that my farewell dish to Diana would have to include this much coveted autumn treat. 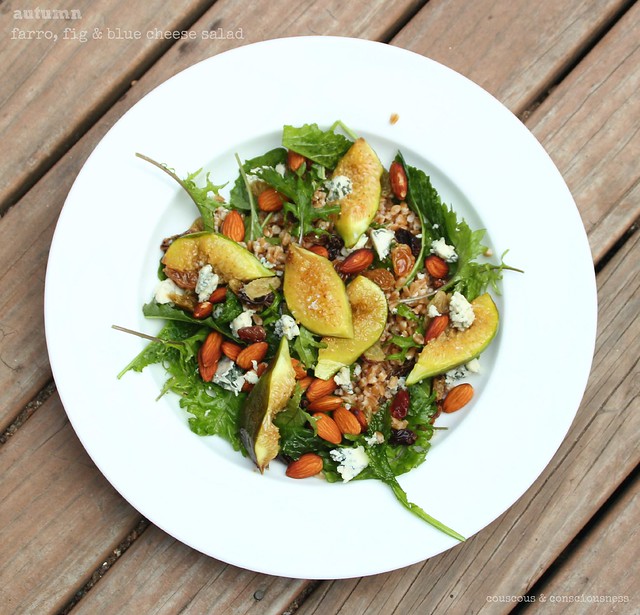 Inspiration came from Diana's recipe in A Change of Appetite for her salad of farro, hazelnuts, grapes and figs.  I changed things up a little bit to use ingredients I had on hand, but I think the spirit of this dish remains the same.  I tweaked the dressing a bit using red wine vinegar instead of white balsamic vinegar, leaving out hazelnut oil because I didn't have any, and adding in a bit of pomegranate molasses because ... well, just because.  I swapped out red chicory and watercress in favour of baby kale leaves which I had on hand;  I used roasted almonds instead of hazelnuts, blue cheese instead of goat cheese, and plump golden raisins instead of grapes.  I also pan roasted the figs in honey before adding them to the salad.


This salad is the ultimate ode to autumn on a plate.  The nutty flavour and texture of the farro is the perfect foil to the soft, sweet figs, the tangy dressing, the crunch of the almonds, and the salty hits of the blue cheese.  This was easily satisfying enough for me to make a meal out of it all on its own, but would also make a great accompaniment to perhaps a roasted chicken or some great sausages.


A glass of shiraz or a great pinot on the side, and you have a meal made in heaven.  I hope you'll give it a try. 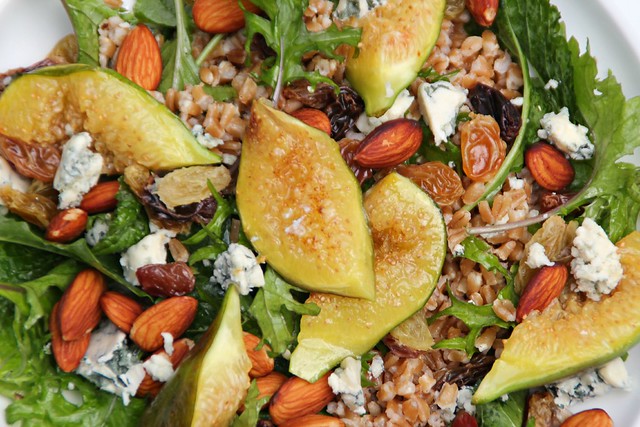 Autumnal Fig, Farro & Blue Cheese Salad Recipe
Adapted from recipe by Diana Henry
from A Change of Appetite
Serves 2 as a generous meal or 4 as a side dish
Click here for a printable copy of this recipe


Put farro in a saucepan, cover with water and bring to the boil.  Reduce heat and simmer the farro until tender but still with a little bite - about 20 to 25 minutes.  Remove from heat, drain well and add lemon juice, 1 tablespoon extra virgin olive oil, and season liberally with flaky sea salt and freshly ground black pepper.  Set aside to cool to room temperature.


Meanwhile make the dressing.  Place all ingredients in a small jar and shake vigorously until everything is well combined.  Taste and adjust flavourings to your taste.  Set aside.


Cut figs in half.  Heat a tablespoon of olive oil in a small saute pan and add the tablespoon of honey.  Add the figs to the pan, cut side down, and allow the figs to soften and warm through in the pan.  Remove from pan, cool slightly, and cut each half in half again if figs are large.


Now that the farro has cooled, taste and adjust the seasoning if necessary.  Add the kale leaves, almonds and plumped-up raisins to the farro, and toss to combine.


Arrange farro mixture on a serving platter, nestle fig pieces into the mixture, and strew nuggets of the blue cheese over the top.  Serve immediately.

And make sure to come back next week as we begin a new six month culinary journey of cooking with French chef Jacques Pepin.

Posted by Couscous & Consciousness at 6:00 PM