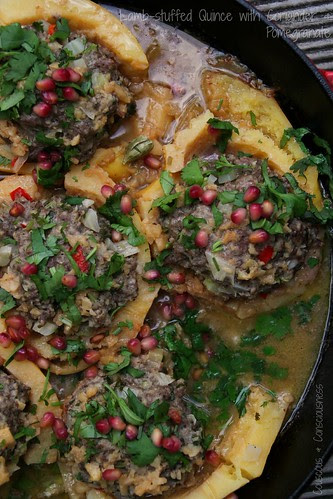 At last the moment I've been telling you about for the last couple of weeks has arrived - yes, we begin our six month journey at I Heart Cooking Clubs with Yotam Ottolenghi.  Yotam is a new chef to many in our group, and I know that everyone has been pretty excited about getting to know him and his food.  On the other hand, he is no stranger to me - I first discovered his books a couple of years ago and have been cooking from them on a regular basis.  This is a little sampling of some of the dishes I've made and posted from his books Ottolenghi, The Cookbook and Plenty, and with his latest book, Jerusalem, now added to my collection, I'm looking forward to making Ottolenghi a weekly guest in my kitchen. 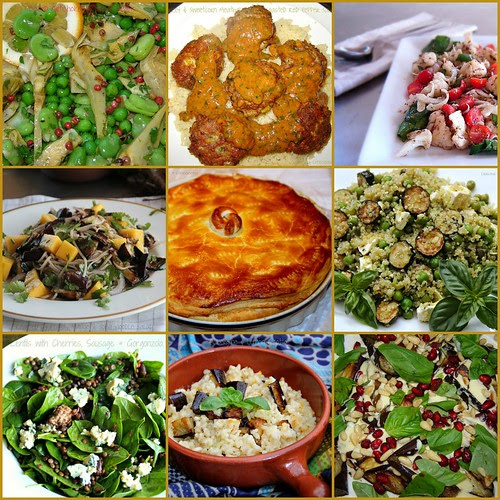 Since this is the beginning of a new journey, it seemed only fitting that I should choose a recipe from the new book, Jerusalem.  I had several dishes bookmarked to try, but when I picked up these beauties at the market last week, it seemed like the decision was made for me. 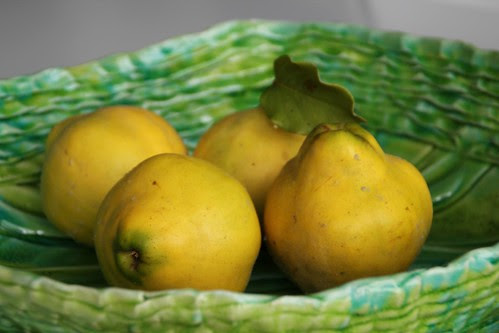 The recipe for Lamb-stuffed Quince with Coriander and Pomegranate was one that had enticed me from the moment I picked up this book.  This is a Persian inspired dish and everything about it seems exotic and celebratory to me.  In fact, as I was preparing this, channeling my "inner Persian housewife" it occurred to me that although this would not be an "every day" kind of dish, the use of such exotic ingredients as coriander, pomegranate molasses, pomegranate seeds, allspice, cardamom would nevertheless be commonplace store cupboard ingredients in your typical Middle Eastern household.  Although, all of these ingredients are now readily available in specialty stores here, and will have found their way into the pantries of many an adventurous cook, they are still about as far removed from the standard fare of your average Kiwi cook as you could get.


This turned out to be a wonderful dish, but it's definitely a labour of love.  Quince are very "hard" fleshed, and scooping out the flesh is difficult work.  Trust me when I tell you that you don't want to make this dish for someone unless you care for them a great deal.  In the introduction to the recipe Ottolenghi does say, that you can take the easier route, and simply dice the quince flesh and turn the lamb into meatballs, cooking them together in the sauce.  I think I would definitely go this route next time around.


The lamb is spicy and aromatic with the allspice and chilli.  The sauce has that delicious sweet-sour-tangy thing going on with the pomegranate molasses, and the indescribable flavour of the quince.  I thought long and hard about how to describe the flavour of quince, but I'm at a loss.  To say it tastes like a cross between an apple and a pear does not do it justice, and to me it seems that the flavour is as much tied up in the fragrance as just the taste.   You just have to try it for yourself - just don't make the mistake of trying to eat them raw.  They are pretty much inedible and must be cooked.


For a special occasion dish, this is a great one to try, and the perfect use for those quince which make such a brief appearance each year.


A couple of notes about the recipe.  Firstly, the recipe calls for simmering the stuffed quince on the stove-top - I think that in future I would bake them in the oven.   Secondly, the recipe called for simmering them for about 30 minutes.  Having had the experience before of cooking them long and slow, I was actually skeptical that they would cook in that short space of time so didn't bother checking them.   As it turned out, by that time they were a little overcooked, so I would check them after 20 minutes or so.  The original recipe included onions, which I replaced with fennel;  I reduced the number of cardamom pods to four, as cardamom is a strong flavour and the eight originally called for seemed a little excessive to me.  Lastly, you may wonder where I got pomegranate seeds at this time of year - I usually buy a few pomegranates when they're available, remove the seeds and stash them in the freezer, ready to sprinkle through salads and other dishes at any time. 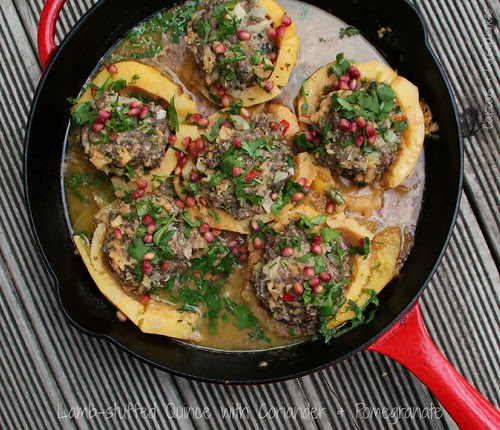 
Discard the tough outer "leaves" of the fennel bulb, and cut the bulb in half.  Cut one half into very small dice (in the same way that you would an onion), and slice the other half as thinly as you can (a mandoline is ideal for this if you have one).


Put the lamb in a medium sized mixing bowl.  Add the finely chopped garlic and chilli, coriander, breadcrumbs, ground allspice, half of the grated ginger, the diced fennel, the egg, a generous pinch of flaky sea salt and a good grind of black pepper.  Mix everything together until well combined (your hands are the best tools for this job), and set aside.


Cut the lemon in half and squeeze the juice from both halves - don't discard the shells.  Reserve one tablespoon of the juice, and add the rest to a medium sized bowl filled with cold water.  Cut the quince in half lengthwise - keeping any pieces you are not working with in the acidulated water.  Using a small spoon (or melon baller if you have one) scoop out the seeds and discard.  Now continue to scoop out more of the flesh, leaving a shell approximately 1cm (1/3 in) thick - the flesh is very hard and this is not easy - I found using a small, sharp knife and "chiseling" it out worked best. As you work, keep rubbing the cut surface of the quince with the squeezed-out lemon shells.  Don't discard the quince flesh that you scoop out - drop that into the bowl of acidulated water too.


Now drain the hollowed-out quince shells briefly and pat dry with a paper towel.  Fill the shells with the lamb mixture, using your hands to press it in quite firmly. 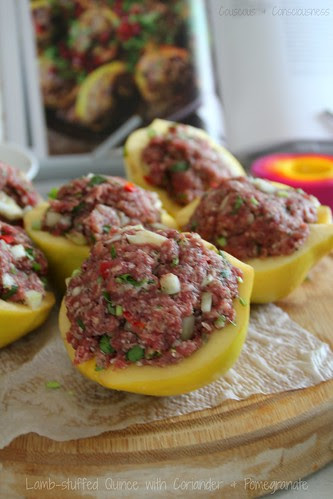 Drain the remaining quince flesh from the water and put into the food processor.  Blitz until quite finely chopped.


Heat the olive oil in a large frypan over medium heat.  Add the minced up quince flesh, remaining ginger and sliced fennel, and cardamom pods.  Saute until the fennel has softened completely - about 5-10 minutes.  Now add the pomegranate molasses, sugar, the reserved tablespoon of lemon juice, stock, another generous pinch of flaky sea salt, and a good grind of black pepper.


Now, nestle the quince halves in amongst the sauce, with the stuffed side uppermost.   Reduce the heat to a simmer, cover and cook for about 30 minutes (check after 20 minutes), until the meat is cooked through, the quince soft and the sauce reduced.  If necessary, remove the stuffed quince from the sauce and increase the heat in order to reduce the sauce further.


Best served warm rather than hot, so allow it to cool a little before serving.  Garnish with extra chopped coriander and a sprinkling of pomegranate seeds. 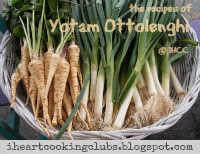 I'm also sharing this post at See Ya In the Gumbo hosted by the lovely Michelle at Ms. enPlace.

Posted by Couscous & Consciousness at 12:28 AM