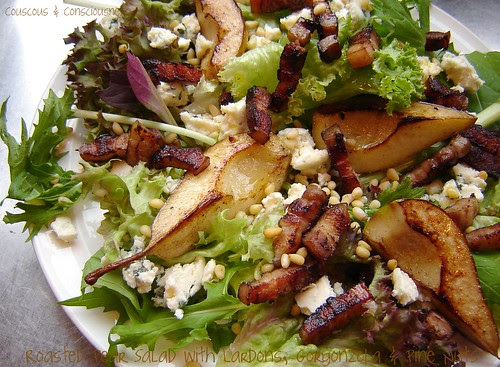 A couple of days ago I told you that I had joined up with the blogging group Charcutepalooza to participate in a year of charcuterie challenges.  The group was founded by Mrs Wheelbarrow and The Yummy Mummy, who are acting as co-hosts and mentors.  We will be working from Michael Ruhlman's book "Charcuterie: The Craft of Salting, Smoking & Curing

", and indeed Michael Ruhlman has also been offering support to the group as we learn, share and explore this age old craft.


As I mentioned the other day, because we are still in the midst of a New Zealand summer, I have so far been unable to participate in the first challenge of making duck prosciutto, but I can't wait to give this a go when the weather turns cooler.


I was, however, very excited when the second challenge of curing our own bacon was announced.  In actual fact we had a choice of making bacon or pancetta but, since the same challenges present themselves for hanging pancetta as hanging duck breasts, bacon it was to be.


Now The Ruhls of the group preclude me from giving you the recipe for curing the bacon (go and buy the book), or have a good look around on the website for guidance.  What I can tell you though is that curing your own bacon is one of the easiest and yet most satisfying things you will ever do in your own kitchen.  Not only that, the end results are so absolutely outstanding you won't ever want to buy bacon again (well you probably will, but it won't be the same).


Make no mistake, people, this is life changing stuff - once you are finished you will marvel at your own cleverness.  Not only that, the amount of credit others will give you for your cleverness is actually out of all proportion to the amount of effort it took to get this much kudos.  No matter, just suck it up.  But more importantly, I believe that in these times of blatant over-commercialism and convenience, when we can pick up a packet of just about anything from the supermarket, we lose so much consideration and respect for where our food really comes from.  Not only that, the increasing availability of so much product (I'm not even going to call it food) that can literally travel directly from the supermarket shelf to your plate (maybe a pass through the microwave if its lucky) has caused us also to lose a great deal of consideration and respect for our own health and well-being (physically, emotionally, spiritually) and that of our families.  What causes obesity? - convenience and not caring.  Okay, I know that is an over-simplification, and I can hear some of you screaming at me through the ether as I write, but you get where I'm coming from, don't you? I truly believe that every step we take in getting closer to the source of our food is a step in the right direction in so many ways.  When we begin to think about the land that produces our food, we will more likely take better care of it;  when we start to think about the animals that give up their lives to feed us, we will more likely take better care of them too;  and when we really start to think about the food we are preparing and feeding to our families, we will almost certainly take better care of them too.  Enough said, because you all know I could really go on here!  End of sermon - go make bacon.


As I just said the process is incredibly simple.  A mixture of salt (see note below**), pepper, herbs, spices and sugar are mixed together to make a paste .... 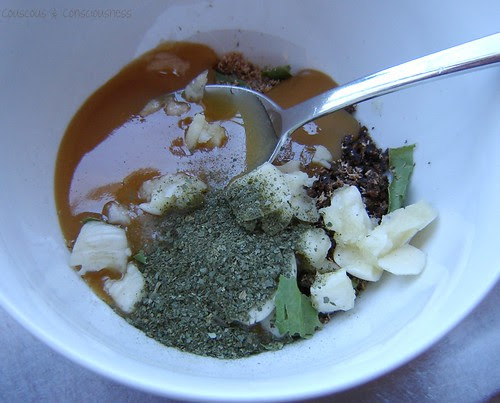 ... then massaged into a piece of free-range pork belly ... 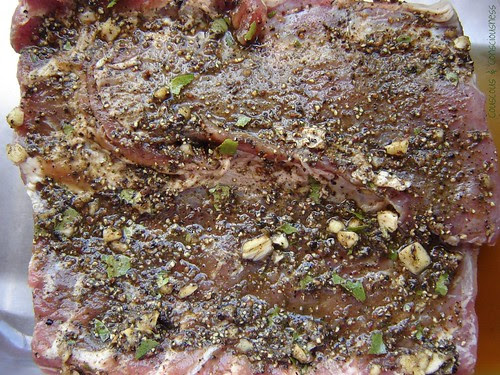 ... and then left to cure for several days, before a final roasting ... 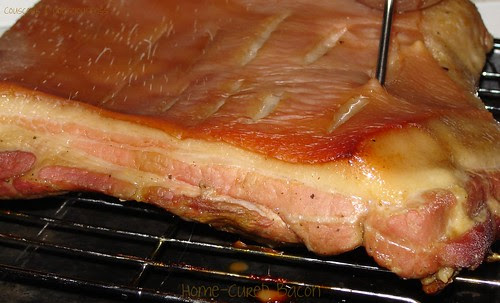 ... after which your bacon will be ready to cook as normal.


I can tell you that, in order to give a uniquely New Zealand flavour to my bacon, I replaced some of the ingredients in my cure with manuka honey and kawakawa (New Zealand bush basil).  I also added a few drops of liquid hickory smoke, for a touch of smokey flavour. We have a commercial brand of bacon here in New Zealand called Kiwi bacon - an abiding childhood memory of growing up in Auckland was driving past the Kiwi bacon factory which used to have an enormous kiwi bird on the roof that went round and round in circles - I like to think what I've done here is a new "spin" on kiwi bacon.


You might get a good laugh out of this TV commercial that used to air here for Kiwi bacon.


(**Note:  I was unable to get any pink curing salt, so just left it out and used only Maldon sea salt.  As predicted, when the bacon first starts to cook it turns a kind of brownish-grey colour (I know that doesn't sound very appealing) rather than retaining the "pinkness" that we normally associate with bacon, but by the time it has browned and crisped completely, it looks and tastes sensational.  All the flavours of the herbs and garlic definitely come through, resulting in a taste unlike any other bacon I have ever tasted.)


I enjoyed my bacon, in this simple but delicious salad ... 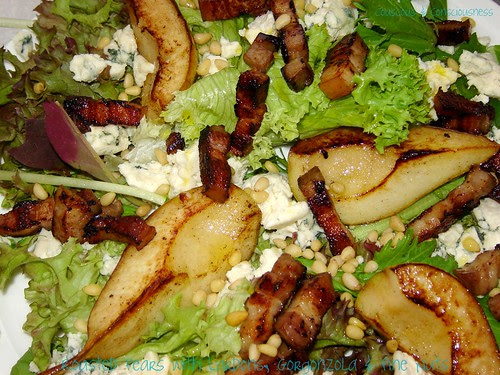 
Cook lardons in hot pan, until golden and crispy and some of its fat has rendered out.  Remove lardons from pan and set on a paper towel to drain, leaving as much of the fat behind in the pan as possible.


Add the quartered pears to the pan, adding a little bit of olive oil if there is not enough fat left from the bacon.


Arrange salad leaves on a plate or platter.  Sprinkle over crumbled Gorgonzola.  As soon as the pears are ready remove them from the pan and arrange over the leaves, pour over any juices from the pan, sprinkle over the lardons and toasted nuts.


Drizzle over a generous amount of extra virgin olive oil and a sprinkling of white balsamic vinegar. 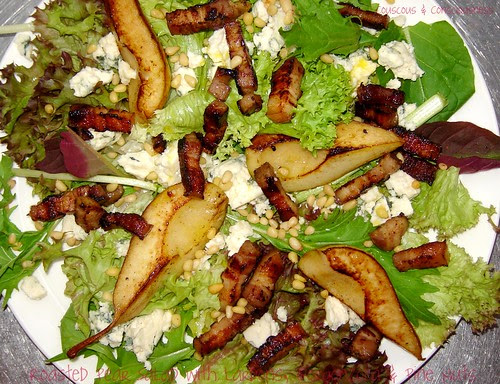 I enjoyed this with some crusty bread and a glass of chardonnay.

Posted by Couscous & Consciousness at 12:03 PM