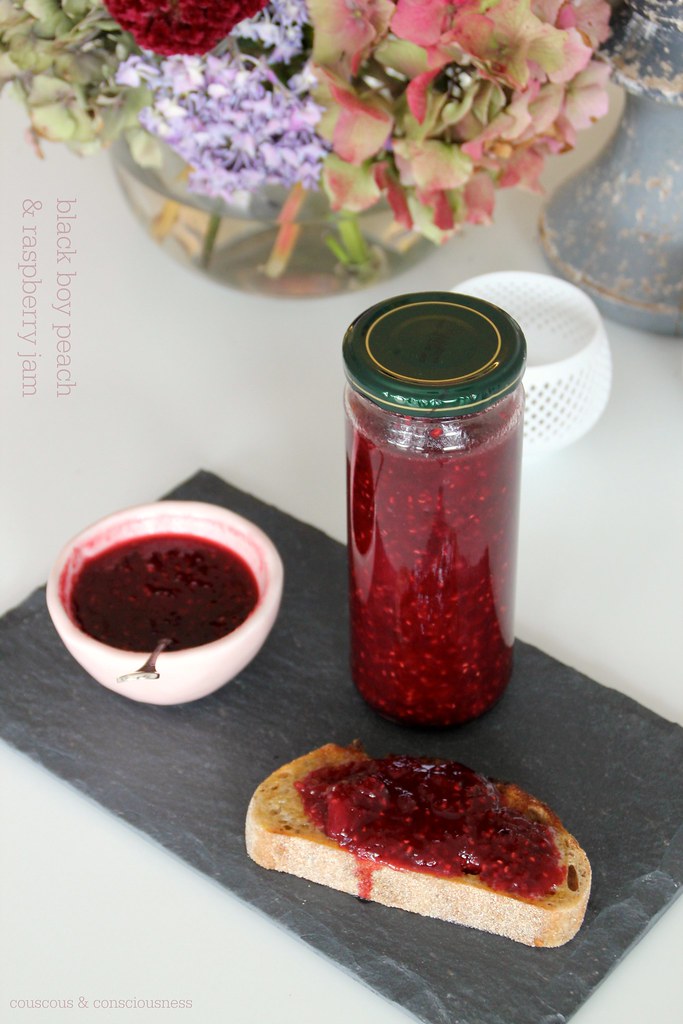 There have been some exciting things happen here in Christchurch in the wake of the February 2011 earthquake.  Many interesting activities that have popped up around the city as a result of the Gap Filler project, quirky cafes and bars have taken up residence on demolition sites, and many of the city's broken buildings have become the canvas for unique artworks, all of which have given the city a real vibrance that it didn't have pre-earthquake. 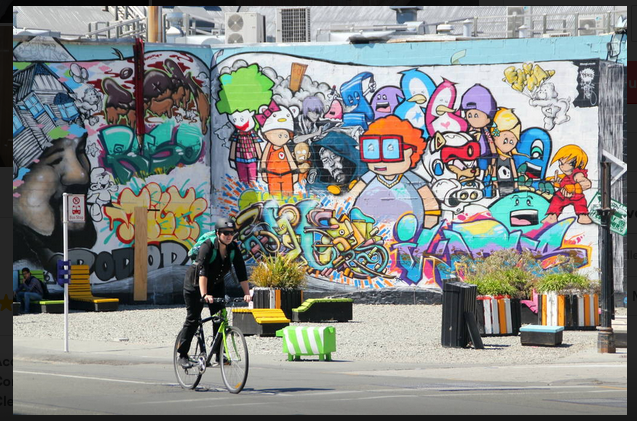 But one thing that is very sobering is the number of whole suburbs that have disappeared, and have now become what we know as the Residential Red Zone.  In these areas the land became highly unstable and the Crown determined that it was uneconomic to repair or stabilise the land.  As a result the Crown acquired all the land from the home owners and all the houses were demolished.  What you see today is large areas of land now devoid of houses and people, but the gardens still remain, like a spectre of the neighbourhoods lost.  Walking around the red zone has an almost eerie feeling to it.  But to every cloud there is a silver lining, and these well established but abandoned gardens are a forager's paradise.


My home is less than 100 metres from the beginning of the red zone, and this week I have been gathering pears and several buckets of Black Boy peaches.  I also have my eye on feijoas, walnuts, figs, more pears, and olives - all yet to ripen.


Some of you may have never come across Black Boy peaches.  They are an old heritage variety, with a dark almost purple skin and pink flesh.  You generally won't come across them in supermarkets;  instead you are most likely to acquire some only if you know someone who grows them, or you might stumble across some at a farmers market if you're lucky.  Unlike other peaches, they are in my opinion better suited to stewing or poaching than eaten fresh, and they are also beautiful made into jams and chutneys. 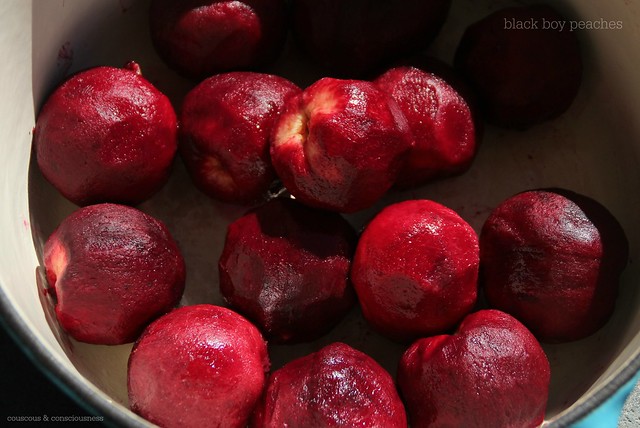 This week at I Heart Cooking Clubs is Potluck Week, giving us the opportunity to cook with any one of our IHCC stable of guest chefs.  With the bounty of all the late summer produce around at the moment, preserving is high priority for me right now, and I've been spending a lot of time lately splattering the pages of Diana Henry's "Salt Sugar Smoke" with all manner of delicious sauces and jams.  I love Diana's approach to preserving and, seeking some inspiration for dealing with one of those buckets of peaches, this seemed like the ideal place to look.  I had been thinking along the lines of chutney actually, but then I stumbled across her recipe for White Peach & Raspberry Jam.  Since I had a stash of frozen raspberries to use up as well, I could go no further. 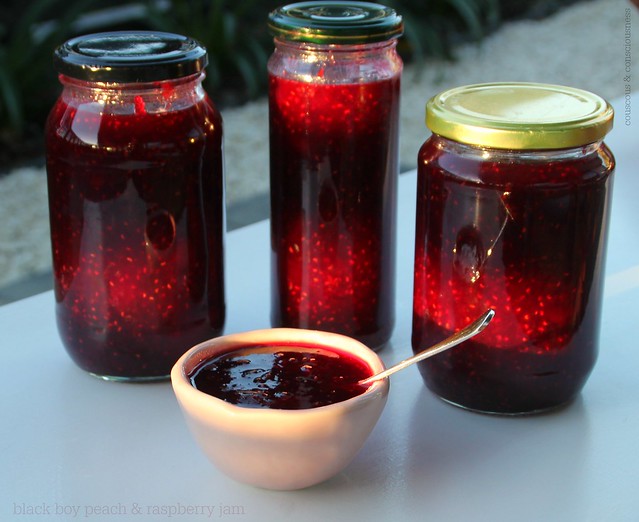 I made a few tiny tweaks to the recipe - firstly using these glorious pink fleshed peaches instead of white;  I included the zest from the lemons along with the juice, because why not:  and I added the grated flesh of one apple instead of the box of commercial pectin asked for in the original recipe.  Also once the jam has been made and bottled, Diana then puts the bottles through a canning process.  Personally, this is something I have never bothered doing with jam, and I've had no problem with them keeping for up to 12 months, but feel free to do so if you have concerns about keeping your jams for long periods of time. 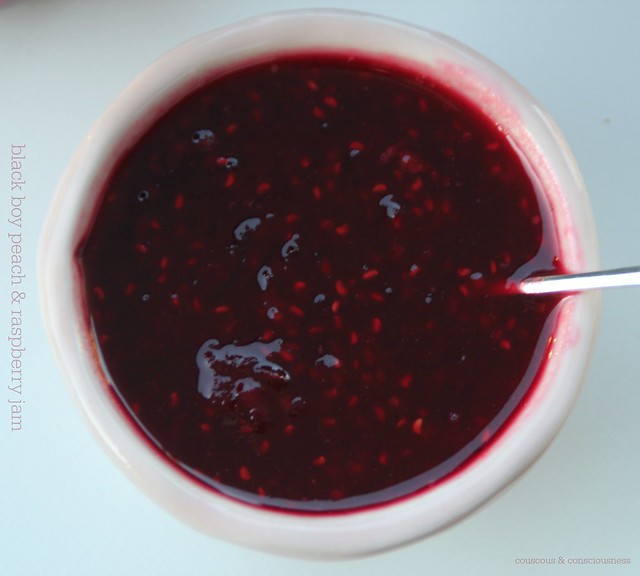 The resulting jam, as you can see, has the most spectacular colour.  It's not overly sweet, has a softish set to it and incredible fragrance, giving this jam an almost seductive quality.  A dollop of this on top of some sourdough rye and carraway bread I picked up at the farmers market made the perfect start to the day for a Sunday morning breakfast. 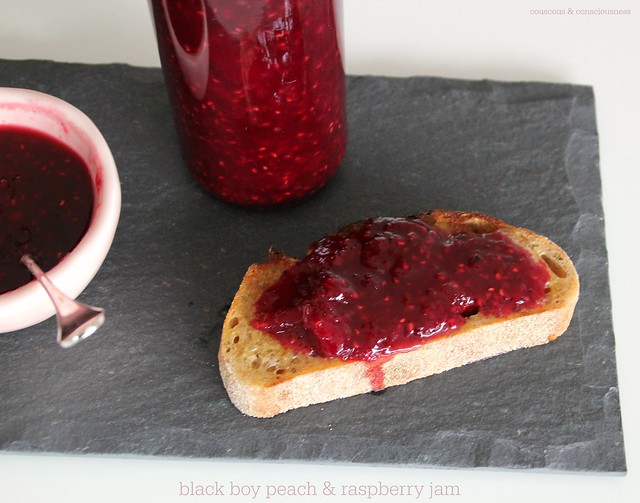 If you're lucky enough to get your hands on some Black Boy peaches, I urge you to give this a try.

1.2kg Black Boy peaches (or whatever peaches you can get)
5 cups raspberries
grated zest of one lemon
juice of 2 lemons
1x apple, flesh grated
5 cups sugar

Place clean jars and lids into a low oven to sterilise them.


Meanwhile remove the skins from the peaches by plunging them briefly into a pot of boiling water.  Remove and plunge into a bowl of cold water.  The skins should then slide off easily.  Halve the peaches, remove and discard the stones, and cut the flesh into slices or chunks.


Put all of the peach flesh into a large, deep saucepan, along with the raspberries, lemon zest, lemon juice, and grated apple.  Crush slightly to start the fruit juices running, then set pan over high heat and bring to a boil.  Add the sugar, bring back to the boil, and continue boiling until setting point is reached (100 degrees C/220 degrees F on a sugar thermometer).

Allow jam to stand for 10 minutes to cool slightly, and then ladle into the hot jars.  Leave to cool before sealing with lids.


If you would like to get to know Diana Henry or any of our other IHCC chefs a little better, and to see all the wonderful Potluck dishes my friends have come up with, then do go visit I Heart Cooking Clubs and check out the links.

Posted by Couscous & Consciousness at 8:33 PM