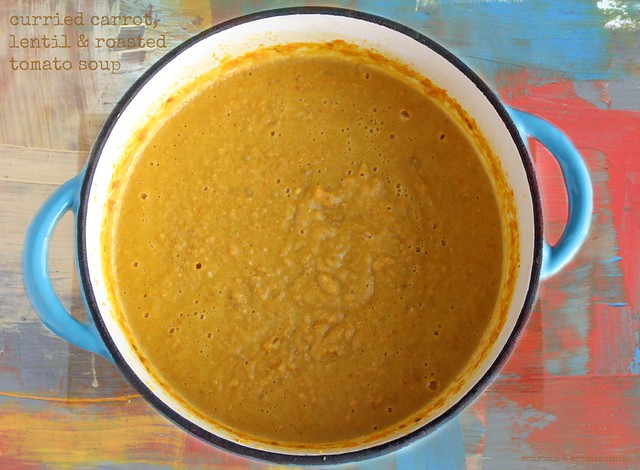 I have a kind of love/hate relationship with carrots.  When I was a kid, the only way that carrots ever showed up in our house was boiled (most nights), or worse still mashed up with either parsnip or swede.  I hated it, and many a "you're not leaving this table until you've eaten those carrots" war was waged in our house.  Stews too were the cause of great angst for me, as I would pick all the bits of carrot out, and then the battle would begin again.


When the '80s came around and glazed carrots became highly fashionable, I found them slightly more palatable, but they were still not a "first choice" vegetable for me.  It wasn't until I discovered roasted carrots that I found a way in which I could not just "like" carrots but really love them.  I was a little ambivalent about raw carrots too until the fabulous Marcella Hazan introduced me to a wonderful salad of shredded carrot, lemon zest & juice, flaky sea salt, and extra virgin olive oil - incredibly simple but positively sublime.


For all that I've found a few ways to love carrots, I've never been brave enough to try carrot soup.  I've always been pretty sure that I wouldn't really like it - I couldn't believe that it was going to taste any different to just blitzed up boiled carrots, and I would hate that.  But for weeks now I've been finding myself constantly drawn to Nigel Slater's recipe in Tender, Vol. 1 for "A soup the colour of marigolds".  Yes, it's just carrot soup, but it looks stunning in the photo and the title sounds so magical I keep coming back to it.  Talk about being seduced by a good line!  After my friend and IHCC co-host Deb at Kahakai Kitchen made this soup a couple of weeks ago, I knew it was only a matter of time before I had to try it.


When our I Heart Cooking Club theme of Budget Friendly Dishes came up this week, I knew the moment had arrived to put this soup to the test.  Budget friendly cooking to me is all about using ingredients which are fresh and seasonal, and with a big bag of carrots I'd picked up for $2 sitting in my veggie crisper I didn't think things could get much lighter on the pocket than that.  The original recipe also calls for yellow tomatoes.  These are definitely not in season here right now, and even if you could find them they certainly wouldn't be budget friendly.  I did, however, happen to have some tomatoes in the freezer which I had slow-roasted when they were in season.  Even though I expected these to detract somewhat from the beautiful marigold colour of Nigel's soup, it seemed like they would make a very good and thrifty alternative to the yellow tomatoes.  I subbed in some celery in place of onions, and  I also decided to add some red lentils to make this a little more "wintery" and comforting, some curry powder for a little spiciness instead of the more mellow bay leaves suggested by Nigel, and some coconut milk for a touch of luxury in such a parsimonious meal.


The verdict:  This could not taste less like "just a bunch of boiled up carrots".  My carrot soup phobia is over.  This soup is heavenly ... plenty of sweetness from the carrots, balanced out by the roasted tomatoes, some earthiness and "comfort" from the lentils, sweetness and fragrance from the coconut milk, and a little heat from the curry powder.  I will definitely be making this soup again, and next time I'm going to try replacing the curry powder with a little harissa - I think the flavours would be great with the carrots and tomatoes, and the kick of heat won't go astray either.  Hey, and guess what ...  I also discovered that my roasted red tomatoes didn't detract from the gorgeous colour one little bit, it's still the colour of marigolds.  What do you think? 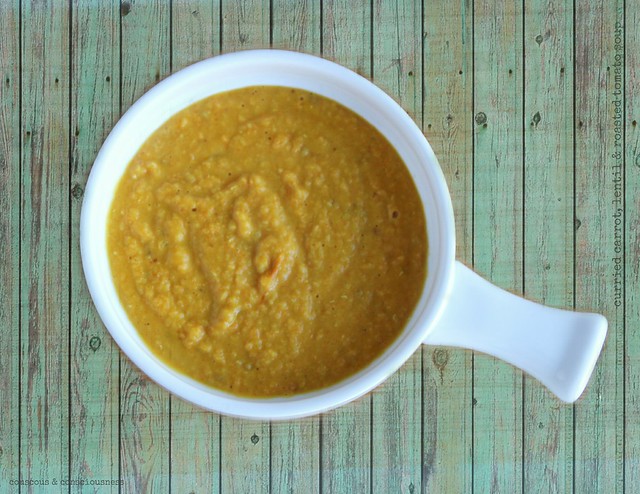 Curried Carrot, Lentil & Roasted Tomato Soup Recipe
Inspired by recipe by Nigel Slater
from Tender, Vol. I
Click here for a printable copy of this recipe


Finely chop the carrots & celery - I blitzed them up in the food processor until very finely chopped.


Heat olive oil in a heavy based pan over medium heat.  Add carrots and celery, sprinkle with a generous pinch of flaky sea salt, and cook (stirring from time to time) until the vegetables have softened and started to release some of their liquid.


Add the tomatoes and curry powder, and continue stirring for a couple of minutes.


Add the lentils, coconut milk, and water.  Stir to combine.  Bring to a boil, then reduce heat, and simmer gently for 30-40 minutes, until the vegetables and lentils are completely soft.   It thickens up a lot as it cooks, so feel free to add more water as necessary.


Use a stick blender to blitz to a puree (or pour into a conventional blender).  Taste and adjust seasoning as necessary.  Serve.


If you would like to get to know Nigel Slater a little better, and to see all the other budget friendly dishes that are on the menu this week, then do go and visit my friends at I Heart Cooking Clubs and check out the links ...


I'll also be sharing this post this week at See Ya In the Gumbo hosted by the delightful Michelle at Ms. enPlace, at Souper (Soup, Salad & Sammies) Sundays hosted by my lovely friend Deb at Kahakai Kitchen, at Weekend Cooking hosted by Beth Fish Reads, at Foodie Fridays hosted by Designs by Gollum, and at Cook Your Books hosted by the lovely Joyce at Kitchen Flavours.

Posted by Couscous & Consciousness at 6:57 AM