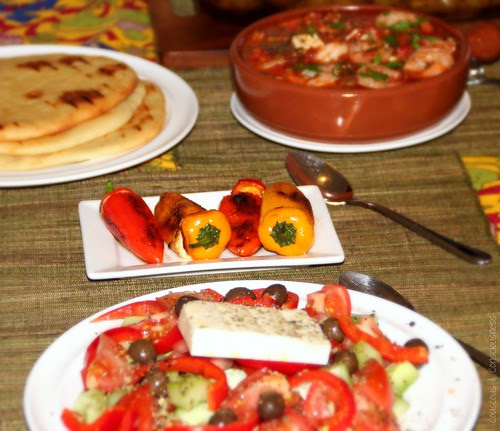 Today I'm taking you on a trip to the Greek islands, and treating your taste buds to, not just one, but four recipes.  You see, at I Heart Cooking Clubs this week, where we are down to our last few weeks of cooking with Tessa Kiros, our theme this week was Mezedes - the Greek tradition of shared foods.  So I thought it was time to break out my copy of Food from Many Greek Kitchens - one of Tessa' books I have been enjoying enormously, but which I have not yet introduced you to.  Which, also makes this a great opportunity to share this post at Cookbook Sundays, a weekly event I host here at Couscous & Consciousness, in order to get some of those unused cookbooks down off the shelves and into the kitchen.


Anyway, as I mentioned, our theme was Mezedes and well ... you can't exactly just have one meze now, can you?  So I decided to go all out and came up with my version of a Greek feast - Prawns with Feta & Tomato, Peppers Stuffed with Feta, Roasted Lemon Potatoes, Pita Bread and a Greek Salad. 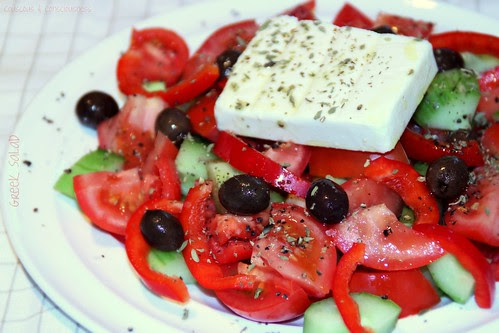 Traditionally, mezedes are served as small plates to be shared as the starter or appetiser to a meal, and the dishes offered here would probably be enough for 4-6 people if they were served as the appetiser to a larger meal.  But two of us ate this as our main meal, and had plenty of leftovers for the next day.  Every one of these dishes were wonderful, and the meal was greeted with the response, "Wow, that very first mouthful transported me right back to Paros".


I would recommend all of these dishes - every single one of them will get made again in my house - and I highly recommend the book.  The pita bread I had been wanting to make ever since Michele raved about it, and it did not disappoint - the breads were soft and fluffy, with just the right amount of "chew".  In fact, if I had to choose a highlight of the dishes I made for this meal, it would probably be the pita breads, not least because it was a revelation to discover how easy it was to make them, and how good the results.  The feta stuffed peppers were beyond easy to make, could easily be prepared in advance, and in fact could even be cooked in advance as they would be just as good served at room temperature as hot.  The saltiness of the feta and the sweetness of the roasted peppers marry together well for a wonderful flavour combination.  The roasted lemon potatoes are to die for if you're a potato lover, and I think this just became the go-to potato dish at my place.  As for the prawns - what's not to love about the simple combination of prawns, tomatoes and garlic?  I think that next time I would bake this in the oven though to intensify the flavour a little rather than cooking on the stove top. 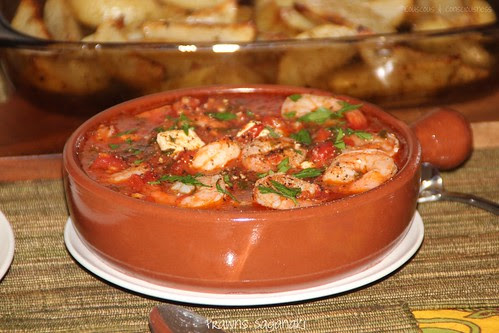 
Heat the olive oil in medium saucepan over low to medium heat.  Add the garlic and saute until it is just fragrant.  Immediately, add the chopped tomatoes with their juice, half the parsley and season liberally with flaky sea salt and freshly ground black pepper.  Bring up to the boil, then cover the pan and simmer for about 10 minutes.  Remove the lid, and simmer for a further 5 minutes or so to reduce and thicken the sauce a little.


Grind some more black pepper over the top, and sprinkle the rest of the parsley over the top to serve. 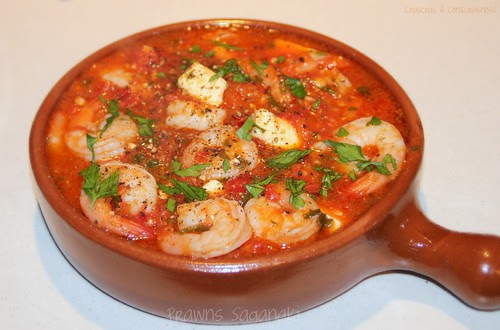 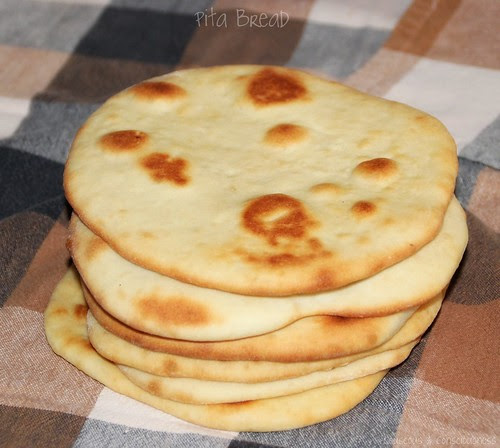 
Put the 3 tablespoons of warm water in a small jug or glass.  Add the honey and sprinkle the yeast over the top.  Stir to dissolve, and then set aside for the yeast to activate.  You will know it's ready when it is frothy on top.


Put the flour and salt into a large bowl.  Make a well in the centre, and pour in the activated yeast mixture, the olive oil and the water.  Mix with a wooden spoon until the dough forms into a rough clump.  Remove from the bowl and, using your hands, knead for 8 to 10 minutes until the dough is soft and springy.  Note, the dough will be sticky to begin with, but avoid adding more flour or flouring your work surface, but simply flour your hands ever so lightly from time to time if the dough is clinging to your hands.


Lightly oil a clean bowl, add the dough ball to the bowl, cover with cling film and then a heavy cloth, and leave in a warm place to prove.  It will take about 1-1/2 to 2 hours and the dough should almost double in size.


Knock the dough down, knead lightly for a minute or two, and then divide into 8 equal sized pieces.  Using your hands, flatten each piece into a flat disc and leave for about 5 minutes for the dough to relax.


Using a rolling pin, roll each disc out into a rough circle, about 2mm (1/16th in) thick.  Brush lightly with olive oil and put onto unfloured baking trays (I got three to a tray). Bake one tray at a time until the breads are just firmed (about 5 minutes), then turn them over and bake for a further 3 minutes.  The breads will finish cooking when reheated just before serving, so they should be a little under-done at this point.


Remove from the oven and immediately stack the breads one on top of each other and wrap in a clean tea towel to keep them soft.


To serve, brush each side of the bread with a little olive oil, and add to a chargrill pan over high heat until warmed on both sides. 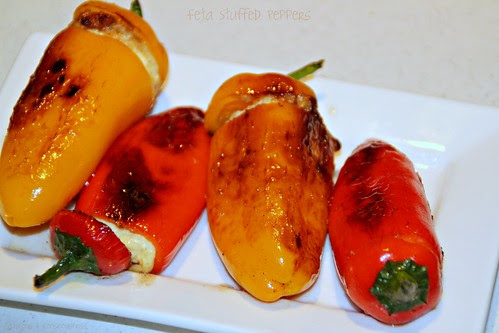 
Cut the tops off the peppers and carefully remove the seeds, taking care to keep the peppers intact.


Crumble the feta, and stuff quite firmly into the peppers.  Replace the tops. 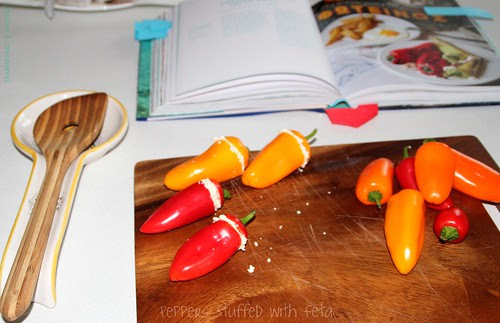 Heat the olive oil in a small frying pan.  Saute the peppers over high heat, turning from time to time, until the peppers have softened and browned and blistered on the outside, and the feta has started to soften.


Sprinkle a little dried oregano over the top to serve. 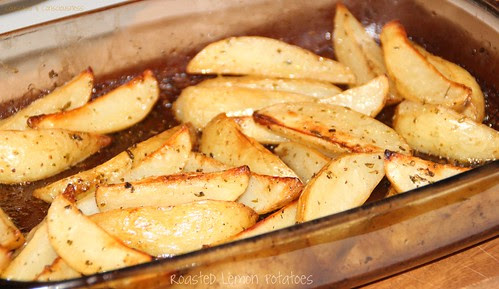 
Halve the potatoes lengthwise, and cut each half into 3 wedges.  Put potatoes in a single layer into an ovenproof dish.  Pour over the lemon juice, and drizzle liberally with olive oil.  Season generously with flaky sea salt and freshly ground black pepper, and sprinkle over the oregano.  Toss the potatoes to ensure they are all well coated with everything.  Pour the water down the sides of the dish, and give the dish a gentle shuffle. 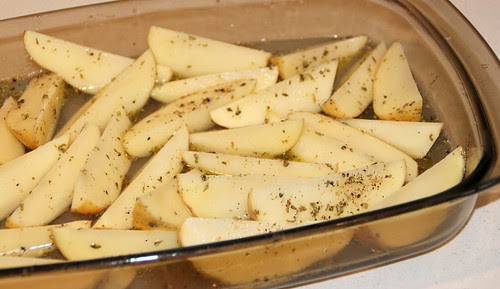 Roast for about 1-1/2 hours, turning and basting every 20 minutes, until the potatoes are tender and golden, and there is still a little sauce left in the dish.


I do hope you'll give some of these dishes a try - I'm sure you won't be disappointed.

... or check out Food From Many Greek Kitchens and many of Tessa's other great titles available from Amazon or Fishpond NZ.

I hope you'll give these mezedes a try - I'm sharing them this week at Cookbook Sundays, where my friends are delving into their cookbook collections and sharing some of their recipes.  Do stop by to see what they're cooking - you might even feel inspired to link up a recipe from one of your own cookbooks.

Posted by Couscous & Consciousness at 9:25 PM