I may have mentioned here before that, in my real life … that is the one that pays the bills and keeps a roof over my head, I work in a kitchenware shop.  This can be dangerous territory for the avid cook, surrounded on a daily basis by beautiful crockery, cutlery, glassware, pots and pans, and a gadget for just about any purpose you might care to mention - many of them useful, others … well, maybe not so much.  To be perfectly honest (and in saying this I mean no disrespect to my employer whatsoever), I don't personally see the point of accumulating an egg slicer, a strawberry slicer, a mushroom slicer and a banana slicer, when one good chef's knife will do the job of all four gadgets and a whole lot more besides.  But there are people out there who clearly have bigger drawers and deeper pockets than I do, as these are all popular products, and who am I to knock it?!


You can imagine that, working in this environment, it would be easy to be splashing out on a whole lot of unnecessary gadgets, and who amongst can say (no matter how discerning) that we don't have at least one such item gathering dust in the deepest recess of a kitchen drawer.  So generally my rule of thumb for purchasing a new gadget is that its primary function has to be something that I would use a lot, or that it should be capable of performing a variety of tasks.


One gadget that I've had my eye on, since it came into stock a month or so ago, is this Chef'n Pocket Maker.  This little gadget is used for making little pies, empanadas, gyozas, etc, and the minute I saw this my mind was abuzz with possible fillings and uses.  As luck would have it, I got to trial one yesterday, and I'm so in love with this product I can't wait to get back to work tomorrow to buy one.  Yes, really, and no one has paid me to tell you this!! The Chef'n Pocket Maker is available in New Zealand from Stevens Homewares stores nationwide, elsewhere from Amazon.  Want to see it in action?  Check out this video.


Aside from the little pot-sticker dumplings I'm sharing with you today, you could also use this gadget for these Fig & Blue Cheese Wontons, these Spicy Vegetable Samosas, individual versions of this Greek Spinach & Feta Pie or this Broccoli, Leek & Blue Cheese Pie, even a variation on these Lemon & Goat Cheese Ravioli.

As luck would have it our theme this week at I Heart Cooking Clubs is tarts and pies, and I have liberally interpreted this to include anything enclosed in some kind of pastry.  Leafing through my collection of Donna Hay books, there was all manner of delicious tarts and pies to tantalise the tastebuds, but it was the Prawn & Chilli Pot-Sticker Dumplings from marie claire dining (which I believe has now been republished as Donna Hay Entertaining) that really took my fancy, as well as providing the perfect opportunity for test driving this great little "gizmo".


I made only a couple of small changes to the recipe, really just adjusting a few quantities to suit what I had on hand and my tastes, and also leaving out shallots as I didn't feel they were necessary and really there is more than enough flavour comes through from the coriander and chilli jam.  I think the addition of shallot would completely kill the delicate flavour of the prawns.  Speaking of the chilli jam, I used my own homemade chilli jam which you can find here, but I have also used this chilli paste in soy oil before which is readily available in most Asian shops and which I think would work well. 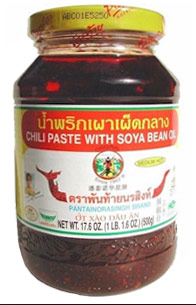 These dumplings were incredibly delicious, and although we ate them as a meal accompanied by an Asian-style slaw, they would also be great to serve as an appetiser or party-pass-around, or even to take for a picnic.  Served with a dish of chilli jam, your favourite Asian-style dipping sauce, or even sweet chilli sauce, these make a truly delightful snack or light meal.


Note:  using the pocket maker this quantity of filling made 30 dumplings, but if you were making them by hand I imagine you would probably get a few less


30 wonton wrappers
1 tablespoon cornflour *
2 tablespoons water *
* Note:  the cornflour and water are not necessary to seal the dumplings
if you are using the pocket maker


Place prawn meat, ginger, coriander, chilli jam, sake and soy sauce in the bowl of a food processor, and pulse a few times until everything is coarsely chopped.  Take care not to overdo it - you don't want to end up with fish paste - your filling should still have a little bit of texture to it.


If making dumplings by hand, place a small spoonful of filling on each wonton wrapper.  Mix the cornflour and water together to make a paste, and brush paste around the edges of the wrapper.  Fold the wrapper in half, and then pleat the edges into form a fan shape, pinching the edges firmly to seal in the filling. Set aside until you have filled all the wrappers.  (If desired, you could actually freeze completed dumplings at this stage) If you would like to get to know Donna Hay a little better, and to see all the scrumptious pies and tarts and pies my friends have cooked up, then visit I Heart Cooking Clubs and check out the links. Posted by Couscous & Consciousness at 5:25 PM