Yes, it's that week again.  It's Potluck week at I Heart Cooking Clubs, and that means that we get to choose any recipe we like from any one of the eight IHCC chefs.  That's a pretty impressive line-up which includes our current chef of course, Yotam Ottolenghi, who enjoys the venerable company of Nigella Lawson, Mark Bittman, Giada de Laurentiis, Jamie Oliver, Tessa Kiros, Rick Bayless and Madhur Jaffrey. 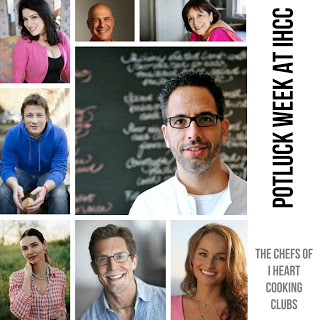 With so much wonderful food to choose from, Potluck week is the time I usually like to try my hand at something a bit special, but at the fag end of a tiring week, and feeling a bit under the weather, something simple, comforting and tasty was called for.


This Celeriac, Lentil & Hazelnut Salad, from Yotam Ottolenghi's book Plenty, was perfect.  It was suitably light when I wasn't feeling like anything too heavy.  Lentils always speak to me of comfort and nourishment.  And celeriac ... well, celeriac is one of my favourite winter vegetables, and is pricey enough in these parts to make me feel like I'm having something quite luxurious.  However, for all that it seems expensive, celeriac does go a long way.  I paid $6 for one medium sized celeriac - I used half of it in this salad, which lasted me two days;  I used quarter of it in a pot of soup which is bubbling away as I write, and which will deliver at least 6-8 servings;  and I still have quarter of it left to use in a Celeriac Remoulade later in the week.


I did, as I always seem to do, tinker with the recipe a little.  I used the brown lentils that I had on hand, instead of the Puy lentils Ottolenghi uses in the original recipe.   For a bit of extra colour and flavour, I also added in some of the roasted red peppers I preserved during the summer, and some of those quick pickled lemons I shared with you a couple of weeks ago (which I now can't help adding to just about everything I make).  I also used flat leaf parsley instead of mint, which I think would have been wonderful, but which is seldom available in the middle of the New Zealand winter.


Since I was going to be eating on my own, I halved the original recipe.  That made two large, main meal servings, which I accompanied one night with grilled sausages and then on the second night with pan-roasted salmon.  Delicious with both, and I think it tasted even better the second day.  This dish can easily be made well in advance, but do make sure to dress the lentils as soon as you take them off the heat and drain them so that they really soak up the flavour. 
Put lentils, water and thyme into a smallish pot and bring to a boil.  Reduce the heat and simmer until the lentils are tender but not mushy - about 15 minutes.


Add the celeriac to another pot of boiling salted water, and cook until just tender - about 8 minutes.


Meanwhile, in a shallow pan over medium heat, toast the hazelnuts until golden.  As soon as they are toasted tip the hazelnuts out into a clean tea towel, and rub vigorously to remove the skins.


As soon as the lentils are cooked, drain, and put into a serving bowl.  Immediately, add the olive oil, red wine vinegar, and a liberal sprinkling of sea salt and freshly ground black pepper.


Drain the celeriac and add to the lentils, along with the roasted red peppers, quick pickled lemons, half the hazelnuts and half the parsley.  Toss well, taste and adjust seasonings to your liking.  Sprinkle the rest of the hazelnuts and parley over the top to serve, and finish with an extra drizzle of extra virgin olive oil.


This is delicious served warm or at room temperature. I'm also sharing this post this week at See Ya In the Gumbo hosted by the lovely, and often hilarious, Michelle at Ms. enPlace, at Souper (Soup, Salad & Sammies) Sundays hosted by my good friend Deb at Kahakai Kitchen, and at Cook Your Books, hosted by the lovely Joyce at Kitchen Flavours.

Posted by Couscous & Consciousness at 8:53 PM